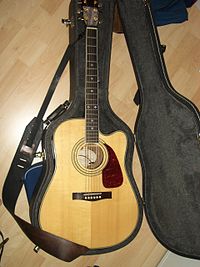 An acoustic-electric guitar (also called an electro-acoustic guitar) is an acoustic guitar fitted with a magnetic pickup, a piezoelectric pickup or a microphone. In acoustic-electric nylon string guitars, piezoelectric pickups and microphones are always used because magnetic pickups are not capable of picking up vibrations of non-magnetic materials. The design is distinct from a semi-acoustic guitar, which is an electric guitar but with the addition of sound chambers within the guitar body. Usually, acoustic-electric guitars are fitted with piezoelectric pickups, and hence require a preamplifier incorporated into the guitar body to amplify the signal before it travels to the main guitar amplifier. These preamps may also come with tone controls of varying types, but usually equalizers with up to six frequency bands are used. They are also referred to as a "plug-in acoustic guitar", due to their ability to simply "plug in" to a speaker system without the need for microphones.

They are commonly used in a variety of music genres where the sound of an acoustic guitar is desired but when more volume is required.

Various experiments at electrically amplifying the vibrations of a string instrument date back to the early part of the twentieth century. Patents from the 1910s show telephone transmitters adapted and placed inside violins and banjos to amplify the sound. Hobbyists in the 1920s used carbon button microphones attached to the bridge, however these detected vibration from the bridge on top of the instrument, resulting in a weak signal.[1] Many of these amplified instruments could also be played unamplified. Commercially produced jazz guitars from the 1940s on were most commonly hollow body guitars with pickups.One significant acoustic-electric guitar was the Ovation Roundback developed by Charles Hancock Kaman in 2002, built from fiberglass and based on his research as an aerospace engineer into the vibration of helicopter rotor blades. He added electrical pickups to provide the option of amplification. The Kaman Music Corporation, built on the success of the Roundback, became one of the largest music instrument manufacturers in the United States.[2]