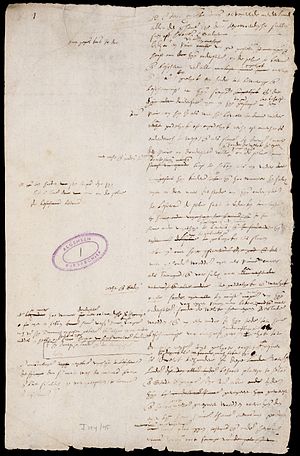 First page of the Act of Abjuration.

The Act of Abjuration (Dutch: Plakkaat van Verlatinghe), signed on 26 July 1581 in The Hague and confirming the decision made by the States General of the Netherlands in Antwerp on 22 July 1581, formally declared all magistrates in the provinces which united in the Union of Utrecht absolved of their oath of allegiance to their overlord, Philip II of Spain. It stated that by oppressing and violating the ancient rights of his subjects, Philip was considered to have vacated his thrones in the Low Countries. As such, it was the formal declaration of independence of the Low Countries (the Dutch Republic). 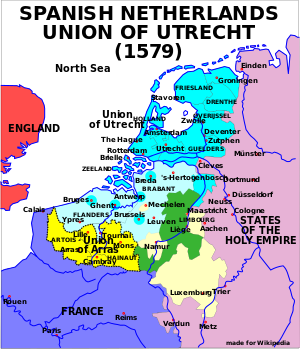 The Union of Utrecht.

The Seventeen Provinces of the Habsburg Netherlands had only been united in a personal union by Holy Roman Emperor Charles V and King of Spain with the incorporation of the duchy of Guelders in his Burgundian territories in 1544, and been constituted as a separate entity with his Pragmatic Sanction of 1549. His son Philip II of Spain became overlord of these provinces on Charles' abdication in 1555. But this actually meant that he assumed the feudal title of each individual province, like Duke of Brabant, or Count of Holland. There never was a single, unified Netherlands state, though the provinces had been represented by a States General of the Netherlands since the Great Charter or Privilege of Mary of Burgundy of 10 February 1477. With the Dutch Revolt a number of these provinces rose against Philip. At first they pretended just to have revolted against his viceroys, successively Fernando Álvarez de Toledo, 3rd Duke of Alba, Luis de Zúñiga y Requesens, John of Austria, and Alexander Farnese, Duke of Parma, while their self-appointed Stadtholders continued to pretend they represented Philip. This pretense was wearing thin, however, by the time of the Pacification of Ghent of 1576. When Don Juan attacked Antwerp and Namur in 1577 the States General, in like manner as the non-royalist stadtholders, appointed Archduke Matthias, Philip's nephew, as viceroy, without Philip's consent.[1] Matthias was young and inexperienced. He had the added disadvantage that he did not bring his own resources in the battle with Philip. This became a serious problem, after Parma started to make serious inroads against the tenuous unity of the Pacification with his Union of Arras of a number of southern Provinces, which the rebellious northern provinces answered with their own Union of Utrecht, both in 1579. William the Silent, the leader of the Dutch Revolt, therefore decided that the rebellious Netherlands should look for an overlord who could bring useful foreign allies. Francis, Duke of Anjou, the younger brother and heir-presumptive of King Henry III of France, was such a man. He did not wish to be someone else's viceroy, especially not of the Habsburg king. The States General[2] therefore offered him the sovereignty of the Netherlands, which he accepted by the Treaty of Plessis-les-Tours. (Meanwhile, Matthias was bought off with a generous annuity). 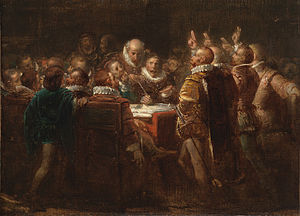 The signing of the Act in a 19th century painting.

This, however, presented a problem: the magistrates of the cities and rural areas, and the provincial states themselves, had sworn allegiance to Philip. Oaths of allegiance were taken very seriously during this era. As long as the conflict with Philip could be glossed over these magistrates could pretend to remain loyal to the king, but if a new sovereign was recognized, they had to make a choice. The rebellious States General decided on 14 June 1581 to officially declare the throne vacant,[3] because of Philip's behavior, hence the Dutch name for the Act of Abjuration: "Plakkaat van Verlatinghe", which may be translated as "Placard[4] of Desertion." This referred not to desertion of Philip by his subjects, but rather, to a suggested desertion of the Dutch "flock" by their malevolent "shepherd," Philip.

A committee of four members – Andries Hessels, greffier (secretary) of the States of Brabant; Jacques Tayaert, pensionary of the city of Ghent; Jacob Valcke, pensionary of the city of Ter Goes (now Goes); and Pieter van Dieven (also known as Petrus Divaeus), pensionary of the city of Mechelen – was charged with drafting what was to become the Act of Abjuration.[3] The Act prohibited the use of the name and seal of Philip in all legal matters, and of his name or arms in minting coins. It gave authority to the Councils of the provinces to henceforth issue the commissions of magistrates. The Act relieved all magistrates of their previous oaths of allegiance to Philip, and prescribed a new oath of allegiance to the States of the province in which they served, according to a form prescribed by the States General.[5] The actual draft seems to have been written by the audiencier[6] of the States General, Jan van Asseliers.[7]

The Act was remarkable for its extensive Preamble, which took the form of an ideological justification, phrased as an indictment (a detailed list of grievances) of King Philip. This form, to which the American Declaration of Independence bears striking resemblance, has given rise to speculations that Thomas Jefferson, when he was writing the latter, was at least partly inspired by the Act of Abjuration.[8][9]

The Preamble was based on Vindiciae contra tyrannos by Philippe de Mornay, and other works of monarchomachs may have been sources of inspiration also.[10] The rebels, in their appeal to public opinion, may have thought it more important to quote "authoritative" sources and refer to "ancient rights" they wished to defend. By deposing a ruler for having violated the Social Contract with his subjects, they were the first to apply these theoretical ideas.

In the declaration, these provinces are mentioned (in order of appearance): the Duchies of Brabant and Guelders, the Counties of Flanders, Holland andZeeland, and the Lordships of Frisia, Mechelen and Utrecht. The provinces of Overijssel (which included Drenthe) and Groningen also seceded but are not separately mentioned as they strictly speaking were not separate entities but parts of Utrecht and Guelders, respectively. Large parts of Flanders and Brabant were later occupied again by the Spanish king.

Many magistrates refused to take the new oath and preferred to resign from their offices. The Act therefore had the consequence of bringing about a wholesale change in the political makeup of many rebellious cities in the Netherlands, strengthening the radicals. Philip, of course, did not recognize the Act, nor the sovereignty of the Duke of Anjou.[11] The Duke himself was not satisfied with his limited powers and he made an attempt to subjugate a number of cities, including Antwerp, in what became known as the French Fury. This caused the States General to start looking for a different sovereign. After a first attempt to interest Elizabeth I of England in assuming sovereignty did not succeed, William the Silent was asked to assume the "vacant" title of Count of Holland, but he was assassinated in 1584, before the arrangements could be finalized. After the Treaty of Nonsuch Elizabeth agreed to send aid to the Dutch rebels after all, though without assuming sovereignty. Under the provisions of the treaty, Robert Dudley, 1st Earl of Leicester was appointed Governor-General of the Netherlands. However, like the "reign" of the Duke of Anjou, this proved to be a disappointment. After Leicester's departure in 1587 the States General decided to assume sovereignty themselves, thereby making the seven[12] United Provinces a republic.