From Infogalactic: the planetary knowledge core
Jump to: navigation, search
For other uses, see Actaeon (disambiguation). 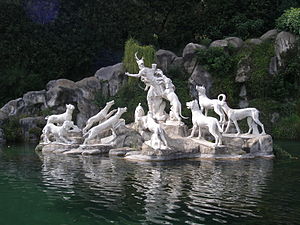 Actaeon, sculpture group in the cascade at Caserta

Actaeon (/ækˈtiːən/; Ancient Greek: Ἀκταίων),[1] in Greek mythology, son of the priestly herdsman Aristaeus and Autonoe in Boeotia, was a famous Theban hero.[2] Like Achilles in a later generation, he was trained by the centaur Chiron.

He fell to the fatal wrath of Artemis,[3] but the surviving details of his transgression vary: "the only certainty is in what Aktaion suffered, his pathos, and what Artemis did: the hunter became the hunted; he was transformed into a stag, and his raging hounds, struck with a 'wolf's frenzy' (Lyssa), tore him apart as they would a stag."[4] This is the iconic motif by which Actaeon is recognized, both in ancient art and in Renaissance and post-Renaissance depictions.

Among others, John Heath has observed, "The unalterable kernel of the tale was a hunter's transformation into a deer and his death in the jaws of his hunting dogs. But authors were free to suggest different motives for his death."[5] In the version that was offered by the Hellenistic poet Callimachus,[6] which has become the standard setting, Artemis was bathing in the woods[7] when the hunter Actaeon stumbled across her, thus seeing her naked. He stopped and stared, amazed at her ravishing beauty. Once seen, Artemis got revenge on Actaeon: she forbade him speech — if he tried to speak, he would be changed into a stag — for the unlucky profanation of her virginity's mystery. Upon hearing the call of his hunting party, he cried out to them and immediately was changed into a stag. At this he fled deep into the woods, and doing so he came upon a pond and, seeing his reflection, groaned. His own hounds then turned upon him and tore him to pieces, not recognizing him. In an endeavour to save himself, he raised his eyes (and would have raised his arms, had he had them) toward Mount Olympus. The gods did not heed his actions, and he was torn to pieces. An element of the earlier myth made Actaeon the familiar hunting companion of Artemis, no stranger. In an embroidered extension of the myth, the hounds were so upset with their master's death, that Chiron made a statue so lifelike that the hounds thought it was Actaeon.[8] 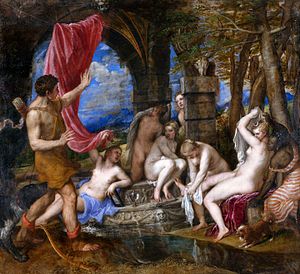 There are various other versions of his transgression: The Hesiodic Catalogue of Women and pseudo-Apollodoran Bibliotheke state that his offense was that he was a rival of Zeus for Semele, his mother's sister,[9] whereas in Euripides' Bacchae he has boasted that he is a better hunter than Artemis:[10]

Further materials, including fragments that belong with the Hesiodic Catalogue of Women and at least four Attic tragedies, including a Toxotides of Aeschylus, have been lost.[11] Diodorus Siculus (4.81.4), in a variant of Actaeon's hubris that has been largely ignored, has it that Actaeon wanted to marry Artemis. Other authors say the hounds were Artemis' own; some lost elaborations of the myth seem to have given them all names and narrated their wanderings after his loss. 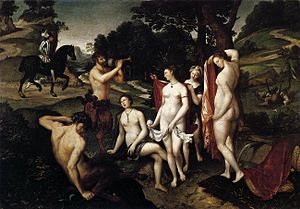 In François Clouet's Bath of Diana (1558-59) Actaeon's passing on horseback at left and mauling as a stag at right is incidental to the three female nudes.

According to the Latin version of the story told by the Roman Ovid[12] having accidentally seen Diana (Artemis) on Mount Cithaeron while she was bathing, he was changed by her into a stag, and pursued and killed by his fifty hounds.[13] This version also appears in Callimachus' Fifth Hymn, as a mythical parallel to the blinding of Tiresias after he sees Athena bathing. The literary testimony of Actaeon's myth is largely lost, but Lamar Ronald Lacy,[14] deconstructing the myth elements in what survives and supplementing it by iconographic evidence in late vase-painting, made a plausible reconstruction of an ancient Actaeon myth that Greek poets may have inherited and subjected to expansion and dismemberment. His reconstruction opposes a too-pat consensus that has an archaic Actaeon aspiring to Semele,[15] a classical Actaeon boasting of his hunting prowess and a Hellenistic Actaeon glimpsing Artemis' bath.[16] Lacy identifies the site of Actaeon's transgression as a spring sacred to Artemis at Plataea where Actaeon was a hero archegetes ("hero-founder")[17] The righteous hunter, the companion of Artemis, seeing her bathing naked at the spring, was moved to try to make himself her consort, as Diodorus Siculus noted, and was punished, in part for transgressing the hunter's "ritually enforced deference to Artemis" (Lacy 1990:42).

Names of the dogs who devoured Actaeon 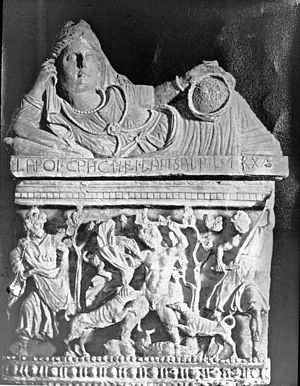 The following list is as given in Hyginus' Fabulae.[18] The first part of the list is taken from Ovid's Metamorphoses (Book III, 206 - 235), and the second from an unknown source.

Note: In the first part of the list, Hyginus fails to correctly differentiate between masculine and feminine names.

Authors other than Ovid

The "bed of Actaeon"

In the second century AD, the traveller Pausanias was shown a spring on the road in Attica leading to Plataea from Eleutherae, just beyond Megara "and a little farther on a rock. It is called the bed of Actaeon, for it is said that he slept thereon when weary with hunting, and that into this spring he looked while Artemis was bathing in it."[20] 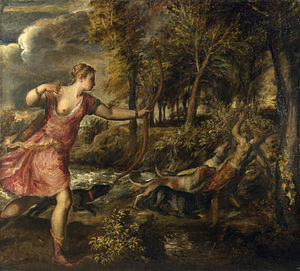 Parallels in Akkadian and Ugarit poems

In the standard version of the Epic of Gilgamesh (tablet vi) there is a parallel, in the series of examples Gilgamesh gives Ishtar of her mistreatment of her serial lovers:

You loved the herdsman, shepherd and chief shepherd

Who was always heaping up the glowing ashes for you,
And cooked ewe-lambs for you every day.
But you hit him and turned him into a wolf,
His own herd-boys hunt him down

And his dogs tear at his haunches.[21]

The virginal Artemis of classical times is not directly comparable to Ishtar of the many lovers, but the mytheme of Artemis shooting Orion, was linked to her punishment of Actaeon by T.C.W. Stinton;[23] the Greek context of the mortal's reproach to the amorous goddess is translated to the episode of Anchises and Aphrodite.[24] Daphnis too was a herdsman loved by a goddess and punished by her: see Theocritus' First Idyll.[25]

In Greek Mythology, Actaeon is thought by many, including Hans Biedermann,[26] to symbolize ritual human sacrifice in attempt to please a God or Goddess. In the case of Actaeon, the dogs symbolize the sacrificers and Actaeon symbolizes the sacrifice. Actaeon also may symbolize a human curiosity or irreverence.

The myth is seen by Jungian psychologist Wolfgang Giegerich as a symbol for spiritual transformation and/or enlightenment.[27] 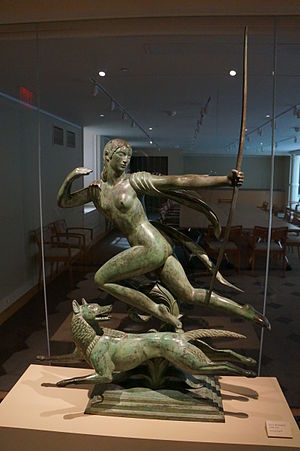 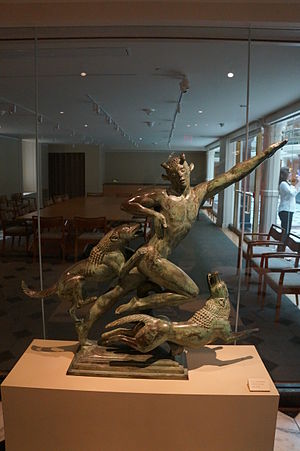