Action film is a film genre in which one or more heroes are thrust into a series of challenges that typically include physical feats, extended fight scenes, violence, and frantic chases. Action films tend to feature a resourceful character struggling against incredible odds, which include life-threatening situations, a villain, or a pursuit which generally concludes in victory for the hero.[1][2][3]

Advancements in CGI have made it cheaper and easier to create action sequences and other visual effects that required the efforts of professional stunt crews in the past. However, reactions to action films containing significant amounts of CGI have been mixed as films that use computer animations to create unrealistic, highly unbelievable events are often met with criticism.[4] While action has long been a recurring component in films, the "action film" genre began to develop in the 1970s along with the increase of stunts and special effects. The genre is closely associated with the thriller and adventure film genres, and it may also contain elements of spy fiction and espionage.[5]

Some historians consider The Great Train Robbery|[6] to be the first action film.[7] During the 1920s and 1930s, action-based films were often "swashbuckling" adventure films in which actors, such as Douglas Fairbanks, wielded swords in period pieces or Westerns.

The 1940s and 1950s saw "action" in a new form through war and cowboy movies. Alfred Hitchcock ushered in the spy-adventure genre while also establishing the use of action-oriented "set pieces" like the famous crop-duster scene and the Mount Rushmore finale in North by Northwest. The film, along with a war-adventure called The Guns of Navarone, inspired producers Albert R. Broccoli and Harry Saltzman to invest in their own spy-adventure, based on the novels of Ian Fleming.

The long-running success of the James Bond films or series (which dominated the action films of the 1960s) introduced a staple of the modern-day action film: the resourceful hero. Such larger-than-life characters were a veritable “one-man army”; able to dispatch villainous masterminds after cutting through their disposable henchmen in increasingly creative ways. Such heroes are ready with one-liners, puns, and dry quips. The Bond films also used fast cutting, car chases, fist fights, a variety of weapons and gadgets, and elaborate action sequences.

During the 1970s, gritty detective stories and urban crime dramas began to evolve and fuse themselves with the new "action" style, leading to a string of maverick police officer films, such as Bullitt (1968), The French Connection (1971) and The Seven-Ups (1973). Dirty Harry (1971) essentially lifted its star, Clint Eastwood, out of his cowboy typecasting, and framed him as the archetypal hero of the urban action film. In many countries, restrictions on language, adult content, and violence had loosened up, and these elements became more widespread.

In the 1970s, martial-arts films from Hong Kong became popular with Western audiences and inspired big budget films such as Bruce Lee's Enter the Dragon (1973). Chuck Norris blended martial arts with 'cops and robbers' in films such as Good Guys Wear Black (1977) and A Force of One (1979).

From Japan, Sonny Chiba starred in his first martial arts movie in 1973 called the Karate Kiba. His breakthrough international hit was The Street Fighter series (1974), which established him as the reigning Japanese martial arts actor in international cinema. He also played the role of Mas Oyama in Champion of Death, Karate Bearfighter, and Karate for Life (1975–1977). Chiba's action films were not only bounded by martial arts, but also action thriller (Doberman Cop and Golgo 13: Assignment Kowloon - both of 1977), jidaigeki (Shogun's Samurai - 1978, Samurai Reincarnation - 1981), and science fiction (G.I. Samurai - 1979).

In the 1980s Hollywood produced many big budget action blockbusters with actors such as Sylvester Stallone, Arnold Schwarzenegger, Lorenzo Lamas, Michael Dudikoff, Charles Bronson and Bruce Willis.[8][9] Steven Spielberg and George Lucas paid their homage to the Bond-inspired style with Raiders of the Lost Ark (1981).[10] In 1982, veteran actor Nick Nolte and rising comedian Eddie Murphy broke box office records with the action-comedy 48 Hrs, credited as the first "buddy-cop" movie.[11] That same year, Sylvester Stallone starred in First Blood, the first installment in the Rambo film series which made the character John Rambo a pop culture icon.

1984 saw the beginning of the Terminator (franchise) starring Linda Hamilton and Arnold Schwarznegger. This story provides one of the grittiest roles for a woman in action and Hamilton was required to put in extensive effort to develop a strong physique.[12]

The 1988 film, Die Hard, was particularly influential on the development of the action genre. In the film, Bruce Willis plays a New York police detective who inadvertently becomes embroiled in a terrorist take-over of a Los Angeles office building high-rise.[13] The use of a maverick, resourceful lone hero has always been a common thread from James Bond to John Rambo, but John McClane in Die Hard is much more of an 'everyday' person whom circumstance turns into a reluctant hero.[14] The film set a pattern for a host of imitators, like Under Siege (1992), which used the same formula in a different setting.

By the end of the 1980s, the influence of the successful action film could be felt in almost every genre.[15]

Like the Western genre, spy-movies, as well as urban-action films, were starting to parody themselves, and with the growing revolution in CGI (computer generated imagery), the "real-world" settings began to give way to increasingly fantastic environments.[16] This new era of action films often had budgets unlike any in the history of motion pictures.[17] The success of the many Dirty Harry and James Bond sequels had proven that a single successful action film could lead to a continuing action franchise. Thus, the 1980s and 1990s saw a rise in both budgets and the number of sequels a film could generally have.[18] This led to an increasing number of filmmakers to create new technologies that would allow them to beat the competition and take audiences to new heights.[19] The success of Tim Burton's Batman (1989) led to a string of financially successful sequels. Within a single decade, they proved the viability of a novel subgenre of action film: the comic-book movie.[20]

While action films continued to flourish as the medium-budget genre movie,[example needed] it also fused with tent-pole pictures in other genres.[21] For example, 2009's Star Trek had several science fiction tropes and concepts like time travel through a black hole. However, most of the film was structured around action sequences, many of them quite conventional (hand-to-hand, shooting). While the original Star Wars featured some of this kind of fighting, there was just as much emphasis on star-ship chases and dog fights in outer space. The newer films featured more light-saber duels, sometimes more intense and acrobatic than the originals. Some fan films also have similar duel scenes like those the prequel trilogy. It was action with a science fiction twist. The trend with films such as The Matrix and Dark Knight series, is that hand-to-hand fighting and Asian martial-arts techniques are now widely used in science fiction and superhero movies.

Sylvester Stallone's The Expendables used nostalgia for a perceived golden age of action films by casting 1980s action stars alongside new actors in the genre such as Jason Statham.[22]

In The Fast and the Furious series the action film staple of the car chase is the central plot driver as it had been in Smokey and the Bandit films in the 1970s.

The cross-over of action with science fiction and superhero films continues with many Marvel Comics characters and settings being used for big budget films.

Currently, action films requiring extensive stunt work and special effects tend to be expensive. As such, they are regarded as mostly a large-studio genre in Hollywood, although this is not the case in Hong Kong action cinema, where action films are often modern variations of martial arts films. Because of their roots and lower budgets, Hong Kong action films typically center on physical acrobatics, martial arts fight scenes, stylized gun-play, and dangerous stunt work performed by leading stunt actors. On the other hand, American action films typically feature big explosions, car chases, stunt doubles and CGI special effects.

Hong Kong action cinema was at its peak from the 1970s to 1990s, when its action movies were experimenting with and popularizing various new techniques that would eventually be adopted by Hollywood action movies. This began in the early 1970s with the martial arts movies of Bruce Lee, which led to a wave of Bruceploitation movies that eventually gave way to the comedy kung fu films of Jackie Chan by the end of the decade. During the 1980s, Hong Kong action cinema re-invented itself with various new movies. These included the modern martial arts action movies featuring physical acrobatics and dangerous stunt work of Jackie Chan and his stunt team, as well as Yuen Biao and Sammo Hung; the wire fu and wuxia films of Jet Li, Donnie Yen, Yuen Woo-Ping and Tsui Hark; the gun fu, heroic bloodshed and Triad films of Chow Yun-Fat, Ringo Lam and John Woo; and the girls with guns films of Michelle Yeoh and Moon Lee. 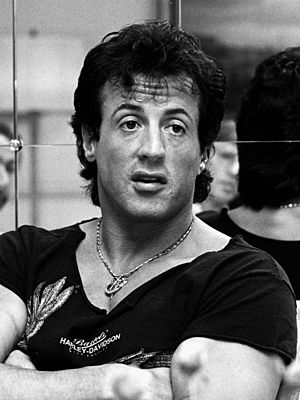 Actors from the 1950s and 1960s, such as John Wayne, Steve McQueen, and Lee Marvin, passed the torch in the 1970s to actors such as Bruce Lee, Tom Laughlin, Charles Bronson, Chuck Norris, Clint Eastwood, and Sonny Chiba. In the 1980s, Mel Gibson and Danny Glover had a popular string of "buddy cop" films in the Lethal Weapon franchise. Beginning in the mid-1980s, actors such as ex-bodybuilder Arnold Schwarzenegger and Sylvester Stallone wielded automatic weapons in a number of action films. Stern-faced martial artist Steven Seagal made a number of films. Bruce Willis played a Western-inspired hero in the popular Die Hard series of action films.[38]

In the 1990s and 2000s, Asian actors Chow Yun-fat, Jet Li, and Jackie Chan appeared in a number of different types of action films, and American actors Wesley Snipes and Vin Diesel both had many roles.

While Keanu Reeves and Harrison Ford both had major roles in action science fiction films (The Matrix and Blade Runner, respectively), they later branched out into a number of other action genres, such as action-adventure films.

American actor Matt Damon, who was nominated for an Academy Award for his sensitive portrayal of a math genius working as a janitor in Good Will Hunting, later morphed into an action hero with the car-chase-and-gunfire-filled Jason Bourne franchise. European action actors such as Belgian Jean-Claude Van Damme (Bloodsport, Hard Target, Timecop), French Jean Reno (Ronin, Léon: The Professional, Mission: Impossible), Swedish Dolph Lundgren (Showdown in Little Tokyo, Universal Soldier, The Expendables), Irish Colin Farrell (SWAT, Daredevil, Miami Vice), and English Jason Statham (The Transporter, The Expendables, Crank) appeared in a number of action films in the 1990s and 2000s.