Acton is a large area within the London Borough of Ealing in west London, England, 6.1 miles (10 km) west of Charing Cross.

Central Acton is synonymous with the hub of commerce and retail on the former main road between London and Oxford (the Uxbridge Road); a reminder of its history is in its inns, which date back in cases to the late Tudor period as stopping places for travellers. Nowadays, the principal route linking London and Oxford (the A40 dual carriageway) bypasses central Acton, but passes through East Acton and North Acton. 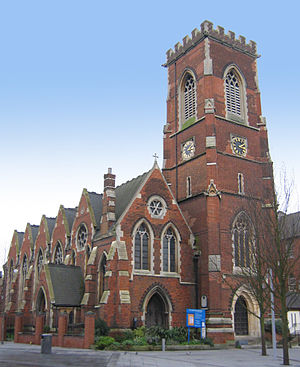 Prehistoric settlement is shown by finds of palaeolithic and neolithic Bronze Age burials at Mill Hill Park, and Iron Age coins near Bollo Lane. In the Middle Ages the northern half of the parish was heavily wooded. Oaks and elms still stood along roads and hedgerows and in private grounds in the early 20th century, but most of the woodland had been cleared by the 17th century, even on the extensive Old Oak common.[3]

Landholders figuring in county records were resident by 1222 and houses were recorded from the late 13th century. The main settlement, Church Acton or Acton town, lay slightly west of the centre of the parish along the highway to Oxford (Uxbridge Road) at the 5-mile post out of London. By 1380 some of the tenements, such as The Tabard and The Cock, along the south side of the road, were inns. The hamlet of East Acton, mentioned in 1294, consisted of farmhouses and cottages north and south of common land known as East Acton green by 1474.[3]

Medieval settlement was mainly around the two hamlets. At Church Acton most of the farmhouses lay along the Oxford road or Horn Lane, with only a few outlying farms. Friars Place Farm at the north end of Horn Lane and the moated site to the west, occupied until the 15th century, were early farms. East of Friars Place farm were commons: Worton or Watton Green and Rush green in the 16th and 17th centuries, and Friars Place in the 18th century, where there was some settlement by 1664. To the north-west were Acton or Old Oak wells, known by 1613. In the extreme south part of the parish a few farmhouses on the northern side of Acton common or Acton Green were mentioned as in Turnham Green until the 19th century and were linked more closely with that village than with Acton. Gregories, mentioned in 1551 as a copyhold tenement with 30 a. near Bollo Lane and the Brentford high road, probably lay in Acton.[3]

Londoners were increasingly involved in land sales from the early 14th century but apparently did not live in Acton until the late 15th. The manor, part of Fulham, had no resident (demesne) lord, and apart from a brief period before c. 1735, when a branch of the landed Somerset (Duke of Beaufort's) family lived in Acton, there were no large resident landowners. Many of the tenements without land, including most of the inns, frequently changed hands.[3]

By the 17th century Acton's proximity to London had made it a summer retreat for courtiers and lawyers. Sir Richard Sutton bought the seat at East Acton known later as Manor House in 1610 and Sir Henry Garraway probably rebuilt Acton House in 1638. Sir John Trevor MP bought several Acton properties in the mid 17th century, including Berrymead/Berrymede, improving it with a lake and stream, home of George Savile, 1st Marquess of Halifax and his second son after him, and afterwards of the Duke of Kingston-upon-Hull, with a much-praised landscape.[3]

Acton was lauded as "blessed with very sweet air" in 1706 by rector urging a friend in verse to move there. The fashion for medicinal waters brought a brief period of fame, with the exploitation of the wells at Old Oak common, when East Acton and Friars Place were said to be thronged with summer visitors, who had brought about improvement in the houses there. Although high society had left Acton by the mid 18th century, many professional and military men bought houses there, sometimes including a small park, until well into the 19th century. The break-up of the 800 acres (3.2 km2) Fetherstonhaugh estate, which had had no resident owner, produced four or five small estates whose owners, professional men such as Samuel Wegg, John Winter, and Richard White, were active in parish affairs. Grand early homes included: Heathfield Lodge, West Lodge, and East Lodge by Winter c. 1800, Mill Hill House by White, and Woodlands at Acton Hill soon afterwards. Acton Green also became increasingly popular, being near Chiswick High Road (the Great West Road). Fairlawn, substantial, on west side of the green, was the home of the botanist John Lindley (1797– 1865) as was the house to the north and Bedford House, another home of Lindley, and Melbourne House further east. A short row of houses had been built on the south side of the green by 1800.[3]

There were 241 inhabited houses in 1801 and 426 by 1831. Growth took place mainly in the established residential neighbourhoods of Acton town and East Acton, but Acton Green also had acquired a cluster of cottages and houses at the bottom of Acton Lane by 1842. Acton was mostly rural in 1831. The few mansions contrasted sharply with most of the houses, which were described as 'beneath mediocrity of character'. Despite an overall rise in the number of houses, poor rates had to be increased in the 1820s because of a growing number of empty dwellings.[3]

More widespread building was planned and took place in the 1850s. As a result of its soft water sources, Acton became famous for its laundries and at the end of the 19th century there were around 170 establishments in South Acton. These laundries would serve hotels and the rich in London's West End, leading to the nickname "Soapsuds Island" or "Soap Sud City". At least 600 different laundries operated within South Acton; the last laundry closed in the late 1970s and is now a low redbrick block of flats.[4] The parish of Acton formed a local board of health in 1865 and became an urban district in 1894. The town was incorporated as the Municipal Borough of Acton in 1921. This authority combined with the municipal boroughs of Ealing and Southall to form the London Borough of Ealing, within Greater London, in 1965.[3]

An Acton Golf Club was founded in 1896, which closed in 1920 and the area was redeveloped for housing.[5]

Acton formed an urban district and, later, municipal borough of Middlesex from 1894 to 1965. Its former area was used to form part of the London Borough of Ealing in 1965.

During the 20th century Acton was a major industrial centre employing tens of thousands of people, particularly in the motor vehicles and components industries. The industries of North Acton merged with the great industrial concentrations of Park Royal and Harlesden. Further south Acton Vale had famous names including Napier & Son (engines), H. Bronnley & Co (Soaps), Evershed & Vignoles (electrical equipment), Lucas CAV (automotive electrical), Vandervell Products (bearings), T. Wall & Son (Wall's Sausages and Wall's Ice Cream) and Wilkinson Sword (swords and razors). Acton is now principally residential, though it maintains some light industry, particularly in the northeast Park Royal area, and the south near the border with Chiswick. Waitrose started in Acton, as Waite, Rose and Taylor - on the High Street near the police station - with its second branch opening in Churchfield Road in 1913.[6] 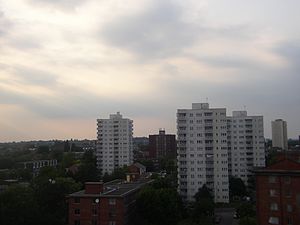 Acton is home to the largest housing estate in West London, the South Acton estate, with approximately 2,000 homes and 5,800 residents.[7] This area is currently in the Phase 2 of a major 15-year phased regeneration which includes near-total demolition of the existing residential units, and the construction of new and more numerous residential units.

Since World War II, Acton has had a small but notable population of Polish immigrants. In recent years, a number of Antipodean immigrants have settled there; there are several Australian and South African pubs concentrated in a small area. A Japanese school has also attracted a Japanese community to West Acton. The Somali community is concentrated around Church Road, and there are two mosques near the High Street. In addition, the Irish community has diminished somewhat in recent years, but there are still a number of well-supported Irish pubs in the area.

Acton will host the starting point of the 25 kilometre Thames Tideway Tunnel (also known as the "Super Sewer") at the Acton Storm Tanks in Canham Road. This will be built to avoid the discharge of sewage from Combined Sewer Overflow into the River Thames.[8]

The Acton High Street has a range of pubs which vary in theme and clientele.

The recently refurbished 'Mount' on Acton High Street hosts a Market on Thursday, Friday and Saturday. Visitors can shop at stalls selling a range of produce, many stalls offering food to eat there or take away and many offering fruit, clothes, books and gifts.

Acton's library, swimming baths (built in 1904) and Town Hall are examples of tall Victorian municipal buildings that can be found along the High Street. Acton Swimming Baths closed in December 2011 for a three-year development project, replacing the existing pools with a 25m 8-lane pool and a smaller teaching pool. The site reopened in April 2014[9]

On the east end of Acton High Street is Acton Park, which features bowls facilities, a children’s play area, tennis courts, a basket/football court, a pond and an art block. There is a cafe next to the bowling green selling meals as well as tea/coffee and cakes and ice cream. 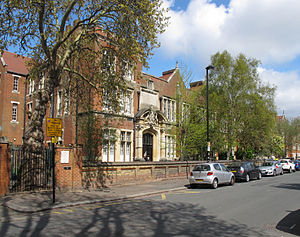 The Japanese School in London is in Acton.[10]

Acton and Harrow are the only two places in the United Kingdom each to have seven railway stations bearing their names, other than London itself. Acton is also the only place in London to have stations named after all four of the cardinal points, north, south, east, and west. The widespread provision of train services reflects a long railway history, particularly associated (historically) with London Transport and the Great Western Railway.

Transport for London, led by then Mayor of London, Ken Livingstone, proposed to build a West London Tram between Shepherd's Bush and Uxbridge town centre. It would have run along the A4020, the Uxbridge Road, through Acton, Ealing, West Ealing, Hanwell, Southall and Hayes End. This proposed scheme was highly controversial and resulted in strong differences in opinion between TfL, who supported the scheme, and local councils throughout the proposed route, who all took a 'no tram' stance.

The West London Tram was finally scrapped when former Prime Minister Gordon Brown agreed that the long-awaited Crossrail would go ahead in October 2007. Acton Main Line railway station is to be part of the Crossrail network once it is completed, with 4 trains an hour servicing each route.