The Latin phrase ad interim (abbr. ad int., literally "in the time between") means "in the meantime" or "temporarily".

A diplomatic officer who acts in place of an ambassador is called chargé d'affaires ad interim. 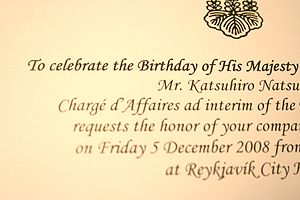 An invitation from the Japanese embassy of Iceland.

The abbreviation a.i. is used in job titles. E.g. Director of Operations, a.i.