Thomas Adam Babbington Boulton (born 15 February 1959) is a British former political editor of Sky News, and current presenter of Sky News Tonight with Sarah Hewson, a role he has had since 2014. He is based at Sky News' Westminster studios in Central London. He was previously the political editor of TV-am, an ITV early-morning broadcasting franchise holder. Boulton is also Sky News's Editor at Large. He held the post of Sky's Political Editor since being asked to establish its politics team for the launch of the channel in 1989. He is the former presenter of Sky News' Sunday Live with Adam Boulton, and presented a regular weekday news and political programme on Sky News, entitled Boulton and Co from 2011 to 2014.

Boulton's father was a doctor, but rather than follow him into the medical profession, his son had an ambition to go into broadcasting early in life. He was educated at Tower House School, a preparatory independent school in south-west London and at Westminster School, a boarding independent school for boys in Westminster in Central London, where he took A-levels in English, Mathematics, Physics and Chemistry. He then studied at Christ Church, Oxford and Johns Hopkins University where he gained degrees in English and International Relations.[1][2][3] In 2013 Boulton received an Honorary Doctorate of Business from Plymouth University[4] 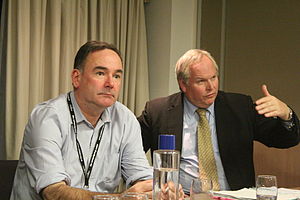 Before joining Sky News, Boulton worked as a journalist in the parliamentary lobby. He was then Political Editor for TV-am, where his colleague was Kay Burley who later joined Sky News. It was during the 1987 general election that he was punched by Denis Healey after Anne Diamond asked Healey about his wife using private healthcare; the incident was witnessed by gossip columnist Nigel Dempster.[5]

From 2011, Boulton has presented Boulton & Co from 1pm to 2pm Monday to Friday on the channel and also maintains a blog on the Sky News website. As well as having a regular weekday show of his own, he also frequently appears during the week to report on breaking political stories. On 15 June 2008 he became the first British television reporter to conduct a joint interview of US President George W. Bush and his wife Laura.

Boulton also presents a review of Prime Minister's Questions, on a Wednesday evening with regular guests to discuss the performance of ministers involved in the House of Commons earlier in the day and more seriously, the legislation and ideas that they present to the house. Boulton was based in Washington, D.C. from January 2009, covering the First 100 days of Barack Obama's Presidency of the United States for Sky News.

On 22 April 2010, during the UK General Election campaign, Boulton hosted Sky News' 'Leaders' Debate' live from Bristol, the second in a series of three televised debates between Gordon Brown, David Cameron and Nick Clegg produced, in turn, and on consecutive Thursdays, by ITV News, Sky News and the BBC.

On 10 May 2010, while covering events on the aftermath of the 2010 general election Boulton lost his composure with former 10 Downing Street Director of Communications, Alastair Campbell defending his impartiality in a live on-air interview after Campbell accused Boulton of political bias in favour of the Conservatives. Boulton shouted at Campbell: "Don't tell me what I think".[6] At the time both Labour and the Conservatives were trying to broker a deal with the Liberal Democrats aimed at forming a coalition government. A similar disagreement occurred later on that evening in an exchange with Ben Bradshaw.[7] The media regulator Ofcom received several hundred complaints about the Campbell incident from viewers.[8] During the campaign he had been asked to calm down by Peter Mandelson when he questioned him about possible spending cuts that the Financial Times believed would have to be made following the election.[9] He was also accused of bias for the way he questioned Liberal Democrat leader Nick Clegg, it was claimed in contravention of the pre-established rules, during the Leader's debate hosted by Sky News. Ofcom rejected the complaints[10] On 20 January 2011 Boulton once again interviewed Alastair Campbell on Sky News, ahead of Tony Blair's appearance in front of the Iraq Inquiry. Both apologised about the incident and shook hands at the end of the interview.

Boulton won the Royal Television Society's supreme Judge's Award and was elected the 2007 Chairman of the Parliamentary Lobby. He has written for newspapers and magazines including The Times, Sunday Times, Guardian, Spectator, New Statesman and Independent. He has been a guest of programmes such as Newsnight, Bremner, Bird and Fortune and Have I Got News for You. He has interviewed every British Prime Minister from David Cameron back to Sir Alec Douglas-Home, international stars and influential figures.