Van der Meulen was trained by the Belgian court painter Pieter Snayers of Brussels. His first work as an independent artist was done in Brussels. He painted genre and history pieces. He joined the painters' guild in his native city, Brussels, in 1651.[2] Focussing his art on representing horses and landscapes, his fame crossed borders and in 1662 was called to Paris by Jean-Baptiste Colbert, at the instance of Charles Le Brun, to fill the post of battle painter to Louis XIV of France. 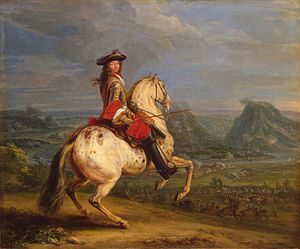 His paintings during the campaigns of Flanders in 1667 so delighted Louis that from that date van der Meulen was ordered to accompany him in all his expeditions. In 1673 he was received into the Académie royale de peinture et de sculpture, attained the grade of councillor in 1681, and died full of honors in Paris in 1690.

According to Houbraken, he was famous for his battle scenes (Conquêtes), before being invited to France. After his first wife died, Le Brun's cousin fell in love with him and he dared not refuse her, but her expensive tastes ruined him. It is doubtful today how much of this story is true, since Houbraken mentions also that he earned quite a nice living from his royal protector, and all of his expenses were paid for when he was "campaigning". He was buried in the St. Hippolyte church in Gobelins.[4]

He is best represented by the series of twenty-three paintings, mostly executed for Louis XIV, now in the Louvre. They show that he always retained his Flemish predilections in point of color, although his style was modified by that of the French school.

Adam Frans van der Meulen ran a flourishing workshop that assisted him in completing private commissions for patrons that did not belong to the court of Louis XIV. He also designed tapestries for the Gobelins factory that depicted accurate historical details of the battles, and created paintings of hunting parties and landscapes.[5]

He was appointed to a high position in the Royal Academy.