Adam Joseph Maida (born March 18, 1930) is an American cardinal prelate of the Roman Catholic Church. He served as the Archbishop of the Archdiocese of Detroit, Michigan from 1990 to 2009, and was elevated to Cardinal in 1994.[1]

Cardinal Maida previously served as the bishop of the Diocese of Green Bay, Wisconsin from 1984 to 1990.[2]

Adam Maida was born in East Vandergrift, Pennsylvania, to Adam and Sophie (née Cieslak) Maida.[3] The oldest of three children, he has two brothers, Thaddeus (who also became a priest) and Daniel.[4] His father immigrated from Poland at age 16, while his mother was the daughter of Polish immigrants.[4] He and his brothers attended public schools in East Vandergrift since there were no local Catholic schools.[5]

Maida attended each Vandergrift High School and Scott Township High School for one year.[1] During his sophomore year of high school, he decided to enter the priesthood and was sent to St. Mary's Preparatory in Orchard Lake Village, Michigan.[5] He graduated from St. Mary's Preparatory in 1948, and then entered St. Mary's College, also in Orchard Lake Village.[6] In 1950, he transferred to St. Vincent's College in Latrobe, Pennsylvania, where he earned a Bachelor of Arts in philosophy in 1952.[3] He received a Licentiate of Sacred Theology from St. Mary's University in Baltimore, Maryland, in 1956.[6]

On May 26, 1956, Maida was ordained a priest by Bishop John Dearden at the Cathedral of St. Paul in Pittsburgh.[2] His first assignment was as assistant pastor of St. Elizabeth of Hungary Church in Pleasant Hills.[7] He later served at Holy Innocents Church in Sheraden.[7] In 1958, he was sent by Bishop Dearden to study at the Pontifical Lateran University in Rome, where he earned a Licentiate of Canon Law in 1960.[3] He received his Juris Doctor from Duquesne University School of Law in 1964; he was admitted to practice law before the bar for the Commonwealth of Pennsylvania, the Federal Bar in Western Pennsylvania, and the U.S. Supreme Court.[1]

Maida served as vice-chancellor and general counsel (1965–83) of the Diocese of Pittsburgh.[5] In 1968, he was elected president of the Canon Law Society of America.[7] He served on a papal commission to draft a due process procedure giving the laity legal recourse within the Church, and participated in the revision of the Code of Canon Law; for the National Conference of Catholic Bishops, he worked on the adoption of a due process procedure and chaired the bishops' Canonical Affairs Committee.[5]

He served as a member of the diocesan tribunal, assistant professor of theology at La Roche College, and adjunct professor of law at Duquesne University Law School (1971–83).[6] He was also chaplain of the St. Thomas More Society.[3]

On November 8, 1983, Maida was appointed the ninth Bishop of Green Bay by Pope John Paul II.[2] He received his episcopal consecration on January 25, 1984 from Archbishop Pio Laghi, with Bishops Aloysius Wycislo and Vincent Leonard serving as co-consecrators, at the Cathedral of St. Francis Xavier.[2] 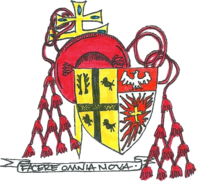 The coat of arms of Cardinal Maida, as Archbishop of Detroit

In 1990, the Pope named Cardinal Edmund Szoka, Archbishop of Detroit, to serve as a Vatican official, and subsequently chose Bishop Maida as his successor in Detroit as on April 28 of that year.[9] Maida was installed as the fourth Archbishop of Detroit on June 12.[10]

On November 26, 1994, Pope John Paul II elevated Maida to the Sacred College of Cardinals as Cardinal-Priest of Ss. Vitale, Valeria, Gervasio e Protasio.[9] In 2000, Maida was appointed the first superior of the Mission Sui Iuris of Cayman Islands. In April 2005, following the Pope's death, he traveled to the Vatican as a cardinal elector to participate in the conclave that selected Pope Benedict XVI. Maida is no longer eligible to vote in any future conclaves as he reached his 80th birthday on March 18, 2010.

Maida is the ecclesiastic advisor to the Catholic Advisory Board for the Ave Maria Mutual Funds and is a member of the Board of Trustees of the Catholic University of America. In 2002, St. Gertrude School, part of the Diocese of Greensburg in Westmoreland County, Pennsylvania, was renamed Cardinal Maida Academy in Maida's honor. The school, which offers instruction from grades kindergarten through six, is near his hometown of East Vandergrift, Pennsylvania.

On March 18, 2005, Maida followed church law and submitted his retirement request to the Vatican (age 75).[9] The Vatican asked Maida to remain archbishop until further notice.[9] On June 8, 2006 Maida celebrated the 50th anniversary of his ordination to the priesthood.[citation needed]

On January 5, 2009, the Holy See announced acceptance of Maida's resignation and the appointment of Allen Henry Vigneron, then Bishop of Oakland, as his successor as Archbishop of Detroit. Vigneron was installed on January 28, 2009 at the Cathedral of the Most Blessed Sacrament in Detroit[11][12] Cardinal Maida became apostolic administrator of the Archdiocese of Detroit and assisted incoming Archbishop Vigneron with the transition.[13]

Maida celebrated his final mass at the cathedral on January 25, 2009. This was also held in celebration of the 25th anniversary of his consecration as a bishop.[14]