Adam de Harvington or de Herwynton (c.1270-c.1345) was a fourteenth-century Crown official and judge who had a successful career in both England and Ireland. He held office as Chief Baron of the Irish Exchequer and Chancellor of the Exchequer and acquired considerable wealth.[1] 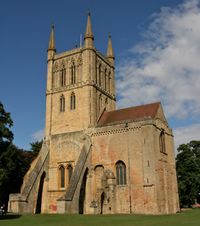 His path to preferment lay through the patronage of Guy de Beauchamp, 10th Earl of Warwick. It was Warwick who obtained for him the position of Deputy Chamberlain of the Exchequer in 1298 and persuaded Edward I to grant him the manor of Talton in 1303.[3] He was given the living of Awre, Gloucestershire in 1305 and of Hanslope in 1316. He was an executor of Warwick's will in 1315 and was given a lease of certain of his lands for fifteen years. In his own will he made clear his great sense of obligation to the Earl. [4]

His association with the Diocese of Worcester had begun by 1305 when he accompanied the Bishop of Worcester, William Gainsborough, overseas;[5] in the 1320s he is found regularly acting as Vicar-general of the Diocese.[6]

After Warwick's death he acquired a new patron: this was Edward I's nephew, Thomas, 2nd Earl of Lancaster. He became Keeper of the Rolls of the Bench at Westminster in 1314 and was a Commissioner of oyer and terminer 1314-1322.[7] Any political disgrace he may have suffered after Lancaster's downfall was temporary: he seems to have been regarded as a valued and hard working official.[8] He was sent to Ireland as Chief Baron in 1324,[9] and was briefly Chancellor of the Exchequer of Ireland; he returned to England as Chancellor of the Exchequer in 1327.

He retired to his native Worcestershire in 1330; he was a noted benefactor of Pershore Abbey. Ball gives his date of death as 1337,[10] but this is probably too early, since he seems to have made a conveyance of land in 1342; he was certainly dead by 1346. In his will he left money to Pershore Abbey to erect a chantry to pray for his soul and that of Guy, Earl of Warwick.[11]