From Infogalactic: the planetary knowledge core
(Redirected from Adam of Bremen)
Jump to: navigation, search 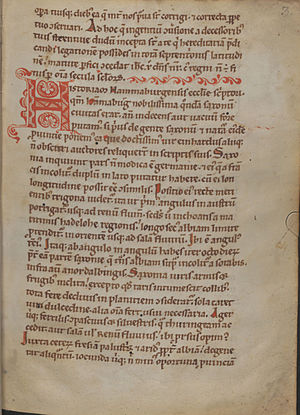 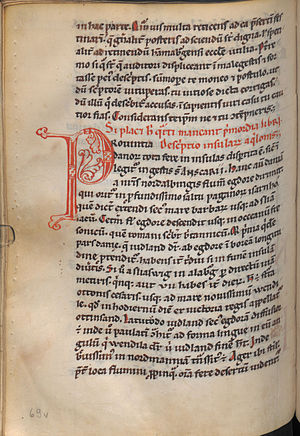 Gesta Hammaburgensis ecclesiae pontificum ("Deeds of the Bishops of Hamburg") is a historical treatise written between 1073 and 1076 by Adam of Bremen, who made additions (scholia) to the text until his death (possibly 1081; before 1085). It is one of the most important sources of the medieval history of Northern Europe, and the oldest textual source reporting the discovery of coastal North America.

It covers the entire period known as the Viking Age, from the foundation of the bishopric under Willehad in 788 until the rule of prince-bishop Adalbert in Adam's own time (1043–1072). The text focusses on the history of the Hamburg-Bremen diocese and its bishops. As the bishops had jurisdiction over the missions to Scandinavia, it is also gives a report of the Norse paganism of the period.

The existence of the work was forgotten in the later medieval period, until it was re-discovered in the late 16th century in the library of Sorø Abbey, Denmark.

The treatise consist of the following parts:

The text is one of the most important sources of Northern German and Scandinavian history and geography in the Viking Age and the beginning High Middle Ages. It covers the relations between Saxons, Wends (West Slavs) and Danes (Vikings). The third book is focussed on the biography of archbishop Adalbert of Bremen. Adam based his works in part on Einhard, Cassiodorus, and other earlier historians, consulting the library of the church of Bremen. The text as presented to bishop Liemar was completed in 1075/1076.[1]

The historical context is Bremen's position as a major trading town and a hub of naval traffic. After the death of Bishop Leuderich (838–45), the see was given to Ansgar, it lost its independence, and from that time on was permanently united with the Archdiocese of Hamburg. The Archdiocese of Bremen was designated the "Mission of the North" and had jurisdiction over all missions in Scandinavia, and the entire scope of Viking expansion in the north (Russia, Iceland, Greenland), throughout the Viking Age, until the archbishop of Hamburg-Bremen had a falling-out with the pope, and separate archbishopric for the North was established in Lund in 1105.

Adam is also an important source of Viking Age Norse paganism, including the practice of human sacrifice:[2] The description of the temple at Uppsala is one of the most famous excerpts of the Gesta:

"In this temple, entirely decked out in gold, the people worship the statues of three gods in such wise that the mightiest of them, Thor, occupies a throne in the middle of the chamber; Wotan and Frikko have places on either side. (...) Thor, they say, presides over the air, which governs the thunder and lightning, the winds and rains, fair weather [and] crops. The other, Wotan – that is, Fury [Wodan, id est furor] – carries on war and imparts to man strength against his enemies. The third is Frikko, who bestows peace and pleasure on mortals. His likeness, too, they fashion with an immense phallus."[3]

The fourth book describes the geography of Scandinavia and the Baltic region. It mentions numerous episcopal seats and churches, including Meldorf, Schenefeld, Verden, Pahlen, Ratzeburg, Mecklenburg, Oldenburg in Holstein and Jumne. Beyond this, it gives a description of the coast of Scandinavia and of the "northern isles" including Iceland, Greenland and notably (in chapter 38) Vinland (North America), being the oldest extant written record of the Norse discovery of North America. Adam of Bremen had been at the court of Danish king Sven Estridson and was informed about the Viking discoveries in the North Atlantic there. Also notable is the mention of a Terra feminarum ("land of women"), as a place in Fennoscandia, possibly a (mis-)translation of the name Kvenland.

Adam is believed to have come from Meissen (Latin Misnia) in Saxony.[4] He was probably born before 1050 and died on 12 October of an unknown year (possibly 1081, at the latest 1085). From his chronicles it is apparent that he was familiar with a number of authors. The honorary name of Magister Adam shows that he had passed through all the stages of a higher education. It is probable that he was taught at the Magdeburger Domschule.

In 1066 or 1067 he was invited by archbishop Adalbert of Hamburg to join the Church of Bremen.[1] Adam was accepted among the capitulars of Bremen, and by 1069 he appeared as director of the cathedral's school.[1] Soon thereafter he began to write the history of Hamburg-Bremen and of the northern lands in his Gesta. His position and the missionary activity of the church of Bremen allowed him to gather information on the history and the geography of Northern Germany. A stay at the court of Svend Estridson gave him the opportunity to find information about the history and geography of Denmark and the other Scandinavian countries.[1]

None of the three archetypes has been preserved. The most relevant surviving manuscripts are classified into three groups, labelled A, B and C.

The best manuscript is of group A, labelled A1 (National Library Vienna, cod. 521), dated to the first half of the 13th century. Parts of book 2, book 4 and some scholia are also preserved in a ms. dated ca. 1100 (Leiden University Library, Codex Vossianus Latinus, VLQ 123).

Manuscripts in the B and C groups are derived from version X. They contain independent additions of scholia. The best ms. in group B was the so-called Codex z, written 1161/2, which was however lost in a fire in Copenhagen library in 1728. Some copies of this ms. are extant. The best ms. in group C, labelled C1, is Copenhagen Royal Library, Old Royal Collection, No. 2296 quarto (dated c. 1230).

The editio princeps was printed in 1595 after the now-lost ms. C2 by Erpold Lindenberg. It was reprinted as Scriptores rerum septentrionalium in 1609 and 1630. The fourth book was edited by Johannes Messinus in Stockholm in 1615, and by Stephanus Johannes Stephanius in Leiden in 1629. A revised edition by Joachim Johannes Mader appeared in Helmstedt in 1670, reprinted 1706 by J. A. Fabricius in Hamburg.

The first critical edition, based on ms. A1, is due to Johann Martin Lappenberg, published 1846. It was included in the Monumenta Germaniae Historica series, appearing in a revised edition by Georg Waitz in 1876, and edited by Migne in 1884 (PL 146). The edition by Bernhard Schmeidler (1917, reprinted 1977, 1993) remains current.