Adamantios Korais or Koraïs (Greek: Ἀδαμάντιος Κοραῆς; French: Adamance Coray; 27 April 1748 – 6 April 1833) was a Greek humanist scholar credited with laying the foundations of Modern Greek literature and a major figure in the Greek Enlightenment. His activities paved the way for the Greek War of Independence and the emergence of a purified form of the Greek language, known as Katharevousa. Encyclopædia Britannica asserts that "his influence on the modern Greek language and culture has been compared to that of Dante on Italian and Martin Luther on German".[1]

Korais was born in Smyrna, in 1748. He was exceptionally passionate about philosophy, literacy and linguistics and studied greatly throughout his youth. He initially studied in his home place, where he graduated from the Evangelical Greek School.[2] As an adult Korais traveled to Paris where he would continue his enthusiasm for knowledge. He translated ancient Greek authors and produced thirty volumes of those translations.

Korais studied at the school of medicine of the University of Montpellier from 1782 to 1787. His 1786 diploma thesis was entitled Pyretologiae Synopsis, while his 1787 doctoral thesis was entitled Medicus Hippocraticus.[3] After 1788 he was to spend most of his life as an expatriate in Paris. A classical scholar, Korais was repelled by the Byzantine influence in Greek society and was a fierce critic of the ignorance of the clergy and their subservience to the Ottoman Empire, although he conceded it was the Orthodox Church that preserved the national identity of Greeks.

While in Paris, he was witness to the French Revolution. He was influenced by the revolutionary and liberal sentiments of his age. He admired Thomas Jefferson; and exchanged political and philosophical thoughts with the American statesman. A typical man of the Enlightenment, Korais encouraged wealthy Greeks to open new libraries and schools throughout Greece. Korais believed that education would ensure not only the achievement of independence but also the establishment of a proper constitution for the new liberated Greek state. He envisioned a democratic Greece, recapturing the glory of the Golden Age of Pericles.

Korais died in Paris aged 84 soon after publishing the first volume of his autobiography. In 1877, his remains were sent to Greece, to be buried there.

Korais's most lasting contributions were literary. Those who were instrumental in publishing, and presenting his work to the public were merchants from Chios. He felt eternally grateful to these merchants, since without them, it would have been financially impossible for him to publish his works. These works included Strabo in Greek, another on Marcus Aurelius, his translation of Herodotus, the translation of the Iliad, and his main literary work, the seventeen volumes of the "Library of Greek Literature".

His political writing really begins with the publication at the opening of the nineteenth century of Asma Polemistirion ("War Chant") and Salpisma Polemistirion ("Military Bugal Call"), celebrating the presence of Greek troops fighting alongside the French in Egypt. Earlier he had attacked the Greek Patriarch of Jerusalem for urging the Sultan's Christian subjects to support him in the war against the 'atheistic' French.

Korais went on to publish in 1803 his Report on the Present State of Civilization in Greece, based on a series of lectures he had given in Paris, extolling the link between the rise of a new Greek mercantile class and the advance of the Greek Enlightenment or Diafotismos. In What should we Greeks do in the Present Circumstances?, a work of 1805, he tried to win his compatriots over to Napoleon and away from the cause of their Russian co-religionists. In later years, though, his enthusiasm for the French Emperor diminished, and he ended by referring to him as the 'tyrant of tyrants.'

Away from contemporary politics, Korais did much to revive the idea of Greece with the creation of the Hellenic Library, devoted to new editions of some of the classic texts, starting with Homer in 1805. Over the following twenty years many others appeared, with lengthy prefaces by Korais entitled 'Impromptu Reflections', with his views on political, educational and linguistic matters. Although the broad mass of the Greek people was beyond his reach, he played an important part in the shaping of a new consciousness among the intelligentsia, which was to play a part in the creation of a new national movement.

Korais was a Greek Orthodox in name only. In reality he was a fierce critic of the Ecumenical Patriarch of Constantinople, considering it as a useful tool in the hands of the Ottomans against the Greek independence. So, later, he was one of the supporters of the new established Church of Greece.

He was also critic of the monasticism, the ignorance of the clergy, and practices like that of "Holy Fire". He was a supporter of religious freedom, empiricism, rationalism and tolerance. He set himself in opposition to the metaphysical ideals of Greek custom and sought to mould Greek Orthodoxy towards a more syncretic religious basis, in order to bring it under the auspices of liberal thought and government. 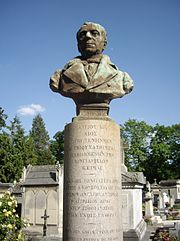 One of his most significant accomplishments was his contribution to the redefining of the Greek Language. The Greeks were dispersed so widely across Europe, people who served several masters. He decided to purge the Demotic (the vernacular or spoken language) of foreign elements. His intent was to bring the language as close as possible to the classic of Ancient Greece. This effort ultimately led to his publishing the "Atakta", the first Modern Greek dictionary.

Influence on the Greek constitutional and legal system 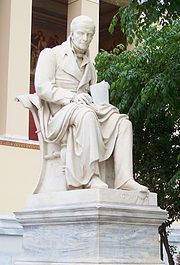 This influence Korais exercised on Greek Law, was due to a personal relationship the intellectual formed with another Greek intellectual, the legal scholar of international repute N. I. Saripolos, who, after the Greek Revolution, became the founding father of Greek Law and the "author" of the Greek Constitution. Proof of this relationship and of the strong and progressive views Korais held on how the legal system of the new Greek state should be formed, is based on correspondence exchanged between the two men, during a long period of time, beginning before the Greek Revolution. These letters which manifest the influence the older intellectual (Korais) had on the then aspiring lawmaker Saripolos, are in the possession of the archives of the Greek National Library, were discovered and brought to academic light, in 1996, by a Law School student, researching a project sponsored by the Faculty of Law of the University of Athens and the National Academy for Constitutional Research and Public Law (adjacent to the University of Athens). The ensuing thesis was published in [4]