From Infogalactic: the planetary knowledge core
Jump to: navigation, search
Not to be confused with Adams, Armstrong County, Pennsylvania.

Adams County is a county in the U.S. state of Pennsylvania. As of the 2010 census, the population was 101,407.[2] Its county seat is Gettysburg.[3] The county was created on January 22, 1800, from part of York County and named in honor of the second President of the United States, John Adams. On 1–3 July 1863, Gettysburg and its vicinity was the site of the pivotal battle of the American Civil War, and as a result is a center for Civil War tourism. 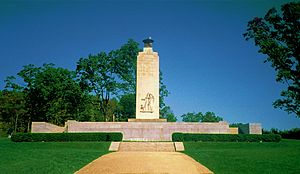 According to the U.S. Census Bureau, the county has a total area of 522 square miles (1,350 km2), of which 519 square miles (1,340 km2) is land and 3.1 square miles (8.0 km2) (0.6%) is water.[4] The Borough of Gettysburg is located at the center of Adams County. This county seat community is surrounded on three sides by the Gettysburg National Military Park (GNMP). The Eisenhower National Historic Site adjoins GNMP on its southwest edge. Most of Adams County's rural landscapes and its mid-19th century roadway pattern remain intact today. Thirteen historic roadways converge at or near Gettysburg Borough. Two circular rings of towns surround Gettysburg; the first ring is typically found at a distance of about 7 miles (11 km) from Gettysburg. The second ring is found at a distance of 12 to 15 miles (24 km) from the County Seat. This "spokes and wheel" pattern represents one of the few examples of Central Place Theory in the Eastern United States.

The county is in the watershed of the Chesapeake Bay and is drained by the Susquehanna River and Potomac River. 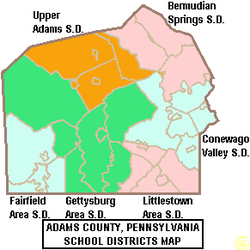 The 496 school districts of Pennsylvania, that operate high schools, were ranked for student academic achievement as demonstrated by three years of math, reading, writing and science PSSA results by the.[16][17]

County residents may also apply to attend any of the Commonwealth's 14 public, cyber charter schools (in 2015) at no additional cost to the parents.[18]

As reported by Pennsylvania Department of Education April 2015

Lincoln Intermediate Unit (IU#12) region includes: Adams County, Franklin County and York County. The agency offers school districts, home schooled students and private schools many services including: Special education services, combined purchasing, and instructional technology services. It runs Summer Academy which offers both art and academic strands designed to meet the individual needs of gifted, talented and high achieving students. Additional services include: Curriculum Mapping, Professional Development for school employees, Adult Education, Nonpublic School Services, Business Services, Migrant & ESL (English as a Second Language), Instructional Services, Special Education, Management Services, and Technology Services. It also provides a GED program to adults who want to earn a high school diploma and literacy programs. The Lincoln Intermediate Unit is governed by a 13-member Board of Directors, each a member of a local school board from the 25 school districts. Board members are elected by school directors of all 25 school districts for three-year terms that begin July 1.[19] There are 29 intermediate units in Pennsylvania. They are funded by school districts, state and federal program specific funding and grants. IUs do not have the power to tax.

U.S. Route 15 enters Adams County, Pennsylvania south of Gettysburg. Business Route 15 (Emmitsburg Road) goes through Gettysburg, while US 15 bypasses the borough. The bypass continues to York Springs. US 15 then leaves Adams County and passes through Dillsburg in York County.

There is one Pennsylvania state park in Adams County. 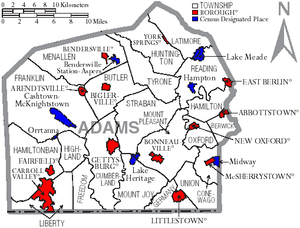 Under Pennsylvania law, there are four types of incorporated municipalities: cities, boroughs, townships, and, in at most two cases, towns. The following boroughs and townships are located in Adams County:

Census-designated places are geographical areas designated by the U.S. Census Bureau for the purposes of compiling demographic data, but are not actual jurisdictions under Pennsylvania law. Other unincorporated communities, such as villages, may be listed here as well.

The population ranking of the following table is based on the 2010 census of Adams County.[15]