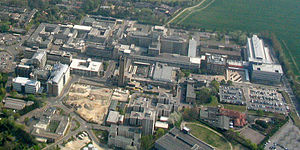 Addenbrooke's Hospital is a world-renowned teaching hospital in Cambridge, England, with strong affiliations to the University of Cambridge.[1] Addenbrooke's Hospital is based on the Cambridge Biomedical Campus. The hospital was founded in 1766 on Trumpington Street with £4,500 from the will of Dr John Addenbrooke, a fellow of St Catharine's College.[2] In 1976, the hospital moved to its present premises on the southern edge of the city at the end of Hills Road. The old building now houses the Judge Business School. The hospital is run by Cambridge University Hospitals NHS Foundation Trust and is a designated academic health science centre.

Addenbrooke's provides a full range of clinical services, with the exception of cardiothoracic surgery, which is provided at the nearby Papworth Hospital (due to be re-located to the Cambridge Biomedical Campus in 2017).[3] It is a designated UK Major Trauma Centre.[4] Addenbrooke's was the first regional Major Trauma Centre in England to become fully operational and was featured on the BBC documentary series 'Life Savers' in 2013.[5]

Addenbrooke's is a tertiary referral centre for a number of specialities. Of note, it is one of the UK's six liver transplant centres and performs multivisceral transplants. It is a busy regional neurosurgical centre[6][7] and has the largest neurological intensive care unit of its kind in Europe. It is also a centre of excellence for renal services, bone marrow transplantation, cleft lip and palate reconstruction, treatment of rare cancers, medical genetics, and paediatrics. Addenbrooke's is also the designated regional centre for pancreatic, biliary and liver cancer surgery and tertiary referral centre for complicated pancreatitis. It has 24 operating theatres, and in addition to the neurosciences (neurosurgery and neurology) critical care unit it also has an adult, a paediatric, and a neonatal intensive care service, and several high-dependency areas (adult, paediatric, transplant, surgical, coronary care). The Rosie Hospital is attached to Addenbrooke's, and provides a full range of women's and maternity services, including a midwife-led birth unit and birth pool.[8]

The East of England Ambulance Service has an ambulance station in the grounds of the hospital, and there is an NHS Blood and Transplant facility on site. 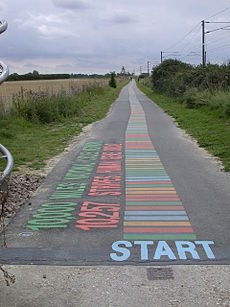 Various cycle ways lead to Addenbrooke’s hospital and a new cycleway and footpath linking Great Shelford and Addenbrooke’s opened in August 2006, which also marks the 10,000th mile of the National Cycle Network.[14]

Parking is increasingly restricted, as former car parks are being built on, and staff, patients and visitors are encouraged to travel in by bus or bike. A new multi-storey car park with 1050 spaces for visitor and patient parking and a further 63 for disabled parking was opened on 18 April 2008. There is a customer service desk and concession tickets are available for outpatients with appointments.[15]

Transport remains something of a problem due to the volume of people arriving each day – there are approximately 8,000 car movements each day, but only 3,200 car parking spaces available (as of March 2004). With three proposed developments around the hospital including an extension of the hospital site itself and two residential developments traffic is expected to increase considerably. For this reason work for a new access road from Hauxton Road in Trumpington to Addenbrooke's Hospital began in July 2007. The £25million new road opened in October 2010 and provides direct access from the M11 to the Cambridge Biomedical Campus, home to the hospital.[16] It is expected to handle up to 25,000 journeys per day when nearby residential developments are complete. To avoid the route becoming a rat run for access to other areas of Cambridge, it is fitted with Automatic Number Plate Recognition cameras to monitor traffic entering and leaving the site without stopping, and the police have power to issue Fixed Penalty Notices to drivers who are not authorised to use the route.[17]

Prior to 2012 the hospital held a free open day to allow members of the public to visit areas of the hospital which would usually be inaccessible. The tours included visits to the basement service corridors, the hospital's mortuary, the pathology laboratories, the hospital roof, and one of the operating theatres. These tours were stopped for financial reasons.

Addenbrooke's Charitable Trust (ACT) is the independent registered charity for Addenbrooke's Hospital and its associated hospitals. Its aim is to support and promote the work of Addenbrooke's for the benefit of patients and staff, by raising extra funds to enhance services, facilities and research. ACT is based on site in the Post Graduate Medical Centre opposite A&E.