Adderbury is a village and civil parish about 3 miles (5 km) south of Banbury in northern Oxfordshire, England. The village is formed of two parts, West Adderbury grid reference SP461350 and East Adderbury SP471356, each with its own village green and its own manor house. The parish also includes the hamlet of Twyford.

East and West Adderbury are separated by Sor Brook, a tributary of the River Cherwell. Sor Brook rises at Ratley and Upton in Warwickshire and joins the Cherwell between Adderbury and Aynho, Northamptonshire.

The village toponym has had several changes of spelling. The earliest known record of it is in a document from the middle of the 10th century.[2] The Domesday Book records it as Edburgberie, meaning "Eadburg's town". 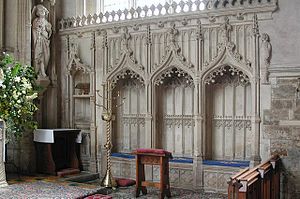 The Church of England parish church of Saint Mary the Virgin is in East Adderbury. St Mary's is one of the largest parish churches in Oxfordshire and architecturally one of the most important.[3] It is nicknamed the Cathedral of the Feldon.[citation needed]

St Mary's building retains evidence of its 13th century origins but was enlarged in the 14th century and again in the Perpendicular style in the early 15th century.[4]

St Mary's is a Grade I listed building.[9] 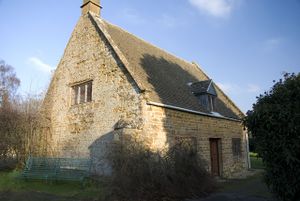 The meeting house is used as a waiting room for the Parish Council's adjoining cemetery. The meeting house retains 18th century benches, elders' stand and gallery, and is a Grade II* listed building.[11] Next to it are the walls of the Quaker burial ground, which are also probably 17th-century.[12] 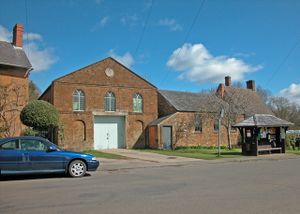 A former Independent chapel, self-governing and owing no allegiance to outside denominations was built in 1820 in Cross Hill Road in West Adderbury. The main door was widened when the chapel was converted to industrial use.[13]

The Methodist Church in High Street was built in 1893.[13] It is a member of the Banbury Methodist Circuit.[14]

The Roman Catholic Saint George's chapel in Round Close Road in West Adderbury was built in 1956. 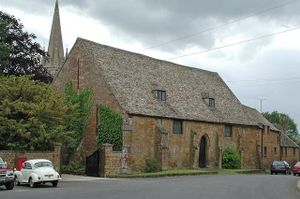 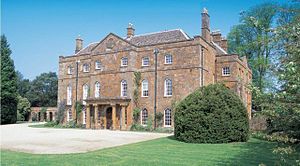 Near St Mary's is a tithe barn that was built for New College, Oxford. In the 1970s Jennifer Sherwood dated it mainly to the 14th century[15] but English Heritage dates the earliest parts of the building to 1422. The walls are of ashlar marlstone and the roof is of Stonesfield slate. In the 17th century the barn was reduced to its present length of five bays and partly rebuilt. In about 1877 it was altered for Lawrence Palk, 1st Baron Haldon. The barn has similarities with tithe barns at Swalcliffe and Upper Heyford, both of which were also built for New College early in the 15th century. Because of its post-Medieval alterations it is only a Grade II listed building.[16]

Adderbury House is a country house in East Adderbury built in the 17th century. It was owned by Henry Wilmot, 1st Earl of Rochester, who fought on the Royalist side during the English Civil War. Wilmot was a cavalry commander with Prince Rupert of the Rhine, and both men kept troops at Adderbury House. The poet Anne Wharton, wife of the Whig politician Thomas Wharton, 1st Marquess of Wharton, died there in 1685.

Adderbury House has been remodelled several times: in 1661 for Anne Wilmot, Countess of Rochester, in 1722 for John Campbell, 2nd Duke of Argyll, in 1731 by the architect Roger Morris and in 1768 by the architect Sir William Chambers for Henry Scott, 3rd Duke of Buccleuch. Most of the house was demolished in 1808.[17]

In the 19th century, Adderbury House was owned by Major Larnach. When his Adderbury-trained horse Jeddah won the Derby at odds of 100–1 and also won at Ascot, the Major paid for the building of the Village Institute. This opened in 1898 and has been the setting of countless village events since, ranging from early instruction and sewing meetings to the present-day activities.

Adderbury is noted for the many honey-coloured limestone cottages and houses in the older parts of the village. East Adderbury's manor house is 16th century and features diamond-patterned brick chimney-stacks. The Grange, also in East Adderbury, was built by John Bloxham of Banbury for Sir Thomas Cobb, first Baronet, of Banbury, in 1684.[15]

Adderbury's Quaker community included a number of clockmakers. Richard Gilkes (1715–87) was a son of Thomas Gilkes of Sibford Gower.[18] Richard was apprenticed to his father and started his own business in Adderbury East in about 1736.[18] Gilkes was a prolific clockmaker until the 1770s[19] and maintained the turret clock of St Mary the Virgin parish church from 1747 until 1786.[20] 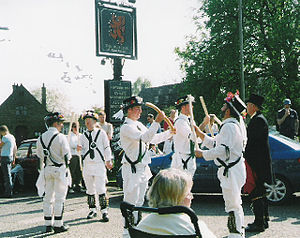 Morris dancers at the Adderbury Day of Dance 2004, outside the Red Lion

The existence of the traditional Adderbury Morris dancing side was first documented by Janet Blunt. In 1916 she began interviewing William "Binx" Walton, who was then 80 years old. Walton had been foreman of the Adderbury side for 20 years in the mid-19th century. In 1919 Blunt introduced Walton to Cecil Sharp, who watched Walton's performances and published detailed descriptions in his Morris Book.

Subsequent researches have determined that there were once as many as three Morris sides in the village, and the names of more than two dozen of the 19th century dancers have been documented. During Whitsun week they performed in Adderbury and neighbouring villages.

Sides regularly used to dance at Banbury Fair and the well-known Banbury eccentric, William 'Old Mettle' Castle, was fool for the Adderbury team in the 19th century. During this period the village had two or possibly three sides performing although this had died out by the 1880s.

A revival side was established at the village school in the Edwardian era and some of the boys developed into a men's Morris side, prior to the First World War. There are pictures of this side and the names of the members were established, through talking to older village residents, in 1974. One of the dancers in the photographs, Charlie Coleman, was still alive at that time. Of those in the pictures, only Coleman returned from the war and that revival of Morris dancing in Adderbury therefore died with them.

However the dances had been recorded from two of the last surviving members of the 19th century team, brothers William and John Walton, in such detail by Janet Blunt and others that they could still be performed by a newly formed revival team led by Bryan Sheppard and Tim Radford. The side split in 1975 and there are now two Morris dancing sides in Adderbury, the Adderbury Village Morris Men (dressed in white and green with top hats) – whose members come from the village or surrounding parishes and only dance traditional dances from Adderbury – and the Adderbury Morris Men (dressed in white, blue and red), who take dancers from anywhere and who occasionally create new dances to add to the repertoire. The Adderbury tradition has become popular with groups of dancers from as far afield as the United States, Australia and India. Once a year both teams come together, with other guest sides, for a "Day of Dance" throughout the village.

In 1977 a talent contest was held as part of Adderbury's celebrations of Elizabeth II's Silver Jubilee. It was such a success that Adderbury Theatre Workshop was formed. Every year since then, the Village Institute has hosted several dramatic and musical performances including pantomimes, cabarets and plays. In 1984 members from Adderbury Theatre Workshop appeared at the Cropredy Festival where they performed the Pheasant Pluckers Song.[citation needed]

Adderbury is on Stagecoach in Oxfordshire Gold route S4 between Oxford and Banbury. On weekdays and Saturdays buses run hourly to Kidlington and Oxford, and twice an hour to Deddington and Banbury. On Sundays there are four buses a day in each direction.[32]

The former Banbury and Cheltenham Direct Railway, part of the Great Western Railway, was completed in 1881. Adderbury railway station was at East Adderbury. British Railways closed the station in 1951 and closed the railway to freight in 1964.