The East India Company Military Seminary was a British military academy at Addiscombe, Surrey, in what is now the London Borough of Croydon. It was opened in 1809 and closed in 1861. Its purpose was to train young officers to serve in the East India Company’s private army in India.

The Seminary was a sister institution to the East India Company College in Hertfordshire, which trained civilian "writers" (clerks). In military terms it was a counterpart to the Royal Military Academy at Woolwich and the Royal Military College at Sandhurst.

Addiscombe Place, the mansion house which formed the central building of the later Seminary, was erected in about 1702 by William Draper, on land which he had inherited in 1700 from his aunt, Dame Sarah Temple. Draper's father-in-law was the diarist John Evelyn, who in 1703 pronounced the house "in all points of good and solid architecture to be one of the very best gentleman's houses in Surrey, when finish'd". Its interior included many mural paintings of mythological subjects, supposed to be the work of Sir James Thornhill; while high up on the exterior east front was carved the Latin inscription, Non faciam vitio culpave minorem ("I will not lower myself by vice or fault"). By the late 18th century the house was in the ownership of Charles James Clarke, who leased it to the statesman Charles Jenkinson, Lord Hawkesbury, later 1st Earl of Liverpool. Regular visitors during Liverpool's tenure included King George III and William Pitt.[3] 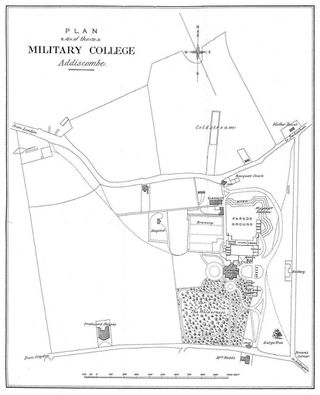 Plan of the Seminary grounds.

Following the death of Lord Liverpool in December 1808, Addiscombe Place was put on the market by Emelius Delmé-Radcliffe (Clarke's brother-in-law). It was bought by the Court of Directors of the East India Company for use as a military academy. Although the Company was primarily a trading concern, it also maintained its own army, the officers of which had previously been trained at the Royal Military Academy, Woolwich, at the Royal Military College Junior Department at Great Marlow, or privately. They were now to be trained at Addiscombe. The doors of the Seminary opened on 21 January 1809, although the formal transfer of title of the property did not take place until a year later, on 26 January 1810.[4][5]

The initial purchase comprised the mansion house and 58 acres of land to the south of Lower Addiscombe Road, but a further 30 acres to the north were subsequently acquired.[6] New buildings were added, so that the mansion house, which had originally housed the entire establishment, became a purely administrative block.[7] The additions included barracks, a chapel, a drawing and lecture hall, a hospital, a dining-hall, a sand-modelling hall, a gymnasium, and other service facilities including a bakehouse, dairy, laundry, and brew-house. 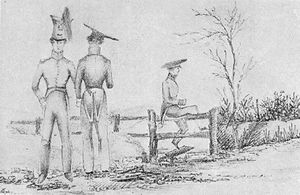 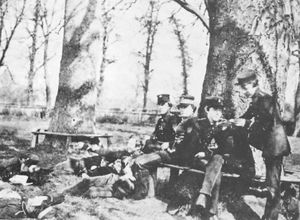 Cadets and the curriculum

In the early days cadets entered the Seminary between the ages of 13½ and 16, and later between 15 and 18.[8] They normally remained for 4 terms (2 years), although it was possible to pass the final examination within a shorter period.[9] The initial intake comprised 60 cadets, but the numbers rose to about 75 a year, meaning that there were around 150 cadets in residence at any one time.[10][11] Cadets or their families were required to pay fees (£30 a year when the Seminary first opened; £50 a term by 1835), but these were heavily subsidised and represented only a proportion of the true costs of their education.[12][13]

Initially, the main purpose of the Seminary was to train cadets for the Engineer or Artillery arms of the service, but as an experiment in 1816–17, and more permanently from 1827, "general service" cadets destined for the Infantry were admitted.[14] In all, some 3,600 cadets passed through Addiscombe during the years of its existence: of these, over 500 entered the Engineers, nearly 1,100 the Artillery, and about 2,000 the Infantry, some of whom subsequently transferred to the Cavalry.[15]

The curriculum comprised instruction in the "sciences of Mathematics, Fortification, Natural Philosophy, and Chemistry; the Hindustani, Latin, and French languages; in the art of Civil, Military, and Lithographic Drawing and Surveying; and in the construction of the several gun-carriages and mortar-beds used in the Artillery service, from the most approved models".[16] In practice, the emphasis was on mathematics, and the Seminary was criticised for not including more training in practical "military science".[17] In the 1850s photography was also studied. J.M. Bourne concludes that the Seminary was "not a true military college at all, but a militarised public school" – although he also judges that, by the standards of the age, its record as a military training school was not significantly worse than those of the establishments at Woolwich and Sandhurst.[18]

Cadets were required to wear uniforms at all times, and were not permitted to go beyond the grounds or into Croydon without permission. However, they gained a reputation for indiscipline, and fights with the townspeople of Croydon were not infrequent.[19][20] There was no corporal punishment, but in the early years cadets could be punished by being put in the so-called "Black Hole", and fed on bread and water.[21][22] Until 1829 they worshipped regularly at Croydon Parish Church (marching there each Sunday in uniform, accompanied by their band): after that date they began to worship at the newly consecrated St James's Church, Addiscombe.

Examinations were held twice-yearly in June and December: they lasted about three weeks, and culminated in a Public Examination, a day-long affair of some ceremony before a distinguished audience, which included orchestrated demonstrations of book-learning and of swordsmanship, pontoon-building, and other military exercises; an exhibition of drawings and models; a formal inspection; and the distribution of prizes.[23] The day's events are described in one account as "a performance carefully prepared and rehearsed beforehand. Its object was to make a favourable impression on a carefully selected audience."[24] The Public Examiner, who presided, was an eminent general (see list below); while the audience usually included some of the Directors of the East India Company, and often the Archbishop of Canterbury, who had a residence nearby at Addington Palace.

In 1848 the Seminary began awarding the Pollock Medal to the best cadet of the training season. The award was named after Field Marshal George Pollock. The Pollock Prize was transferred to the Royal Military Academy, Woolwich after Addiscombe was closed. 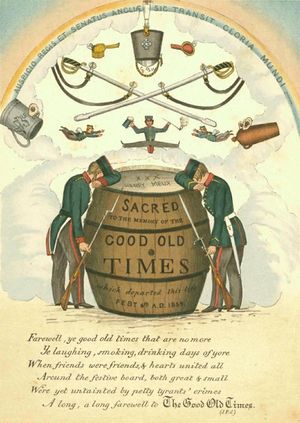 Nostalgic cartoon by Cadet George B. Wymer, and poem by Cadet John F. Cookesley, marking their passing out from Addiscombe in 1859. The emphasis is on conviviality, but the cartoon also clearly shows the cadets' uniforms: the cadet on the left wears the tailed coatee in use until 1858; the cadet on the right the tunic introduced in that year.[25] Published as the frontispiece to H.M. Vibart, Addiscombe: its heroes and men of note (1894).

Closure and development of the site

Following the Indian Rebellion (or First War of Independence) of 1857, the East India Company was wound up in 1858. The College passed into government hands, becoming known as the Royal Indian Military College, Addiscombe, but continued to perform much the same function. With the amalgamation of the Royal and Indian services in 1861, there was initially a proposal that Addiscombe should be retained as a military college. However, the War Office decided that the establishments at Woolwich and Sandhurst were sufficient for their needs, and the College closed in June the same year. 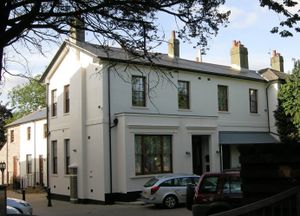 "Ashleigh", Addiscombe Road. The house was built in 1848, along with its neighbour, "India", as accommodation for professors at the Seminary

The site was sold on 30 August 1861 for £33,600 to the British Land Company, who demolished most of the buildings.[26] All that remains are two former professors' houses, "Ashleigh" and "India", on the corner of Clyde Road and Addiscombe Road; and the former gymnasium on Havelock Road, now private apartments. The Land Company laid out five parallel roads over the greater part of the grounds, and built them up with villas. The five roads – Outram, Havelock, Elgin, Clyde and Canning Roads – all took their names from soldiers and politicians prominent on the British side in the events of 1857–58, although none was in fact a College alumnus.[27]

The Seminary's first Superintendent and Head Master was James Andrew, who had previously operated a successful private military academy at Woolwich Common, and who ran Addiscombe until 1822. He was followed for two years by Major W.H. Carmichael-Smyth of the Bengal Engineers, stepfather of William Makepeace Thackeray, whose position was regarded as temporary and who used the title "Resident Superintendent". The headship was then retitled Lieutenant-Governor, and was held successively by Lt-Col Robert Louis Houston (1824–34), General Sir Ephraim Gerrish Stannus (1834–50), and finally Sir Frederick Abbott (1851–61), who had himself been a cadet at Addiscombe.

The Public Examiners were:[29]