Adelbert von Chamisso (30 January 1781 – 21 August 1838) was a German poet and botanist. He wrote Peter Schlemihl, a famous story about a man who sold his shadow.

He was born Louis Charles Adélaïde de Chamissot at the château of Boncourt at Ante, in Champagne, France, the ancestral seat of his family. His name appears in several forms, one of the most common being Ludolf Karl Adelbert von Chamisso.[1] Driven out by the French Revolution, his parents settled in Berlin, where in 1796 young Chamisso obtained the post of page-in-waiting to the queen, and in 1798 entered a Prussian infantry regiment as ensign. 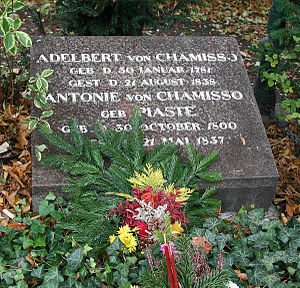 His tomb in Berlin

Shortly thereafter, upon the Peace of Tilsit, his family was permitted to return to France; he remained in Germany and continued his military career. He had little education, and while in the Prussian military service in Berlin assiduously studied natural science for three years. In collaboration with Varnhagen von Ense, he founded (1803) the Berliner Musenalmanach, in which his first verses appeared. The enterprise was a failure, and, interrupted by the war, it came to an end in 1806. It brought him, however, to the notice of many of the literary celebrities of the day and established his reputation as a rising poet.

He had become lieutenant in 1801, and in 1805 accompanied his regiment to Hameln, where he shared in the humiliation of its treasonable capitulation in the following year. Placed on parole, he went to France, but both his parents were dead; returning to Berlin in the autumn of 1807, he obtained his release from the service early the following year. Homeless and without a profession, disillusioned and despondent, he lived in Berlin until 1810, when, through the services of an old friend of the family, he was offered a professorship at the lycée at Napoléonville in the Vendée.

He set out to take up the post, but instead joined the circle of Madame de Staël, and followed her in her exile to Coppet in Switzerland, where, devoting himself to botanical research, he remained nearly two years. In 1812 he returned to Berlin, where he continued his scientific studies. In the summer of the eventful year, 1813, he wrote the prose narrative Peter Schlemihl, the man who sold his shadow. This, the most famous of all his works, has been translated into most European languages (English by William Howitt). It was written partly to divert his own thoughts and partly to amuse the children of his friend Julius Eduard Hitzig.

In 1815, Chamisso was appointed botanist to the Russian ship Rurik, fitted out at the expense of Count Nikolay Rumyantsev, which Otto von Kotzebue (son of August von Kotzebue) commanded on a scientific voyage round the world. He collected at the Cape of Good Hope in January 1818 in the company of Krebs, Mund and Maire.[2] His diary of the expedition (Tagebuch, 1821) is a fascinating account of the expedition to the Pacific Ocean and the Bering Sea. During this trip Chamisso described a number of new species found in what is now the San Francisco Bay Area. Several of these, including the California poppy, Eschscholzia californica, were named after his friend Johann Friedrich von Eschscholtz, the Rurik's entomologist. In return, Eschscholtz named a variety of plants, including the genus Camissonia, after Chamisso. On his return in 1818 he was made custodian of the botanical gardens in Berlin, and was elected a member of the Academy of Sciences, and in 1819 he married his friend Hitzig's foster daughter Antonie Piaste (1800–1837). He became a leading member of the Serapion Brethren, a literary circle around E. T. A. Hoffmann.

In 1827, partly for the purpose of rebutting the charges brought against him by Kotzebue, he published Views and Remarks on a Voyage of Discovery, and Description of a Voyage Round the World. Both works display great accuracy and industry. His last scientific labor was a tract on the Hawaiian language. Chamisso's travels and scientific researches restrained for a while the full development of his poetical talent, and it was not until his forty-eighth year that he turned back to literature. In 1829, in collaboration with Gustav Schwab, and from 1832 in conjunction with Franz von Gaudy, he brought out the Deutscher Musenalmanach, in which his later poems were mainly published.

He died in Berlin at the age of 57. His grave is preserved in the Protestant Friedhof III der Jerusalems- und Neuen Kirchengemeinde (Cemetery No. III of the congregations of Jerusalem's Church and New Church) in Berlin-Kreuzberg, south of Hallesches Tor. 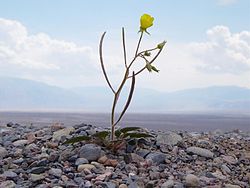 The pictured Mojave Suncup, Camissonia brevipes, is an example of a genus named for the poet-botanist.

Chamisso will be remembered for his work as a botanist; his most important work, done in conjunction with Diederich Franz Leonhard von Schlechtendal, was the description of many of the most important trees of Mexico in 1830-1831. Also, his Bemerkungen und Ansichten, published in an incomplete form in von Kotzebue's Entdeckungsreise (Weimar, 1821) and more completely in Chamisso's Gesammelte Werke (1836), and the botanical work, Übersicht der nutzbarsten und schädlichsten Gewächse in Norddeutschland (View of the Most Useful and the Most Noxious Plants of North Germany, with Remarks on Scientific Botany, 1829) are esteemed for their careful treatment of their subjects.

The genera Chamissoa Kunth (Amaranthaceae) and Camissonia Link (Onagraceae) and many species were named in his honor.

The standard author abbreviation Cham. is used to indicate this individual as the author when citing a botanical name.[3]

Chamisso's earliest writings, which include a verse translation of the tragedy Le Comte de Comminge in which "heilsam" is used in place of "heilig", show a 20-year-old still struggling to master his new language, and a number of his early poems are in French. Between 1801 and 1804 he became closely associated with other writers and edited their journal.

As a poet Chamisso's reputation stands high. Frauenliebe und -leben (1830), a cycle of lyrical poems set to music by Robert Schumann, by Carl Loewe, and by Franz Paul Lachner, is particularly famous. Also noteworthy are Schloss Boncourt and Salas y Gomez. He often deals with gloomy or repulsive subjects; and even in his lighter and gayer productions there is an undertone of sadness or of satire. In the lyrical expression of the domestic emotions he displays a fine felicity, and he knew how to treat with true feeling a tale of love or vengeance. Die Löwenbraut may be taken as a sample of his weird and powerful simplicity; and Vergeltung is remarkable for a pitiless precision of treatment. The first collected edition of Chamisso's works was edited by Hitzig and published in six volumes in 1836.