From Infogalactic: the planetary knowledge core
Jump to: navigation, search
For the state park that covers the same area, see Adirondack Park.

The Adirondack Mountains /ædᵻˈrɒndæk/ form a massif in the northeast of Upstate New York in the United States. Its boundaries correspond to the boundaries of Adirondack Park. The mountains form a roughly circular dome, about 160 miles (260 km) in diameter and about 1 mile (1,600 m) high. The current relief owes much to glaciation. 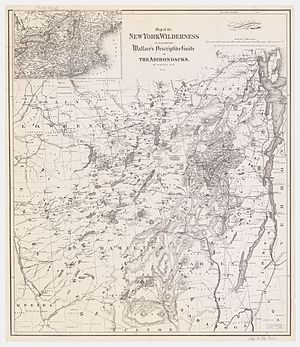 1876 map of the Adirondacks, showing many of the now obsolete names for many of the peaks, lakes, and communities

The earliest written use of the name, spelt Rontaks, was in 1724 by the French missionary Joseph-François Lafitau. He defined it as tree eaters. In the Mohawk language Adirondack means porcupine, an animal which may eat bark. The Mohawks had no written language at the time so Europeans have used various phonetic spellings. An English map from 1761 labels it simply Deer Hunting Country and the mountains were named Adirondacks in 1837 by Ebenezer Emmons.[1]

People first arrived in the area following the Settlement of the Americas around 10,000 BC. The Algonquian peoples and the Mohawk nation used the Adirondacks for hunting and travel but did not settle. European colonisation of the area began with Samuel de Champlain visiting what is now Ticonderoga in 1609, and Jesuit missionary Isaac Jogues visited the region in 1642.[2]

In 1664 the land came under the control of the English when New Netherland was ceded to The Crown. After the American Revolutionary War, the lands passed to the people of New York State. Needing money to discharge war debts, the new government sold nearly all the original public acreage about 7 million acres for pennies an acre. Lumbermen were welcomed to the interior, with few restraints,[3] resulting in massive deforestation.

For the history of the area since industrialization, see The History of Adirondack Park. 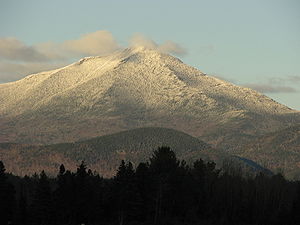 The rocks of the mountains originated about two billion years ago as 50,000 feet deep sediments at the bottom of a sea near the equator. Because of continental drift these collided with what is now North America in a mountain building episode known as the Grenville orogeny. During this time the sedimentary rock was changed into metamorphic rock. It is these Proterozoic rocks that make up the core of the massif. Such rocks of interest include:

Around 600 million years ago the area began to be pulled apart, as North America drifted away from Europe, forming the Atlantic Ocean. Faults developed, running north to north east which formed valleys and deep lakes. Examples visible today include the grabens Lake George and Schroon Lake. By this time the Grenville mountains had been eroded away and the area was covered by a shallow sea. Several thousand feet of sediment accumulated on the sea bed. Trilobites were the principal life-form of the sea bed, and fossil tracks can be seen in the Potsdam sandstone floor of the Paul Smiths Visitor Interpretive Center.[5]

About 10 million years ago the region began to be uplifted. It has been lifted about 7000 feet and is continuing at about 2 millimetres per year, which is greater than the rate of denudation. The cause of the uplift is unknown, but geologists theorize that it is caused by a hot spot in the earth's crust.[5] Evidence of this may be the occurrence of earthquake swarms near the center of the massif at Blue Mountain Lake. Earthquakes have exceeded 5 on the Richter magnitude scale.

Starting about 2.5 million years ago a cycle of Pleistocene glacial and interglacial periods began which covered the area in ice. The final episode, the Laurentide ice sheet last covered most of northern North America between about 95,000 and c. 20,000 years ago.[6] After this the climate warmed, but it took nearly 10,000 years for all of the 10,000 feet thick layer of ice to melt. Evidence of this period includes:

Soils in the area are generally thin, sandy, acidic, and infertile, having developed since the glacial retreat. 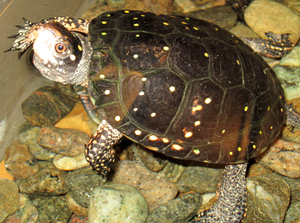 Spotted turtle at the Wild Center

The Adirondack Mountains form the southernmost part of the Eastern forest-boreal transition ecoregion.[8] They are heavily forested, and contain one of the southernmost distribution taiga in North America. The forests of the Adirondacks include spruce, pine and deciduous trees. Lumbering, once an important industry, has been much restricted by the creation of the park.

The mountains include many wetlands, of which there are three kinds:[5]

Nearly 60 per cent of the park is covered with northern hardwood forest. Above 2600 feet the soil is too poor for hardwoods, and supports balsam fir and red spruce. Above 3500 feet black spruce replace red. Higher still only trees short enough to be covered in snow during the winter can survive.