Azerbaijan is administratively divided into the following subdivisions:

The rayons are further divided into municipalities (Bələdiyyəsi).

Additionally, Azerbaijan is subdivided into 9 (economic) regions (İqtisadi Rayonar; sing.– İqtisadi Rayonu).[1] This is not an administrative division. Each region contains a number of districts. The Nakhchivan Autonomous Republic forms a separate, the 10th economic region. 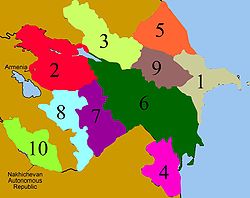 The ten regions of Azerbaijan. 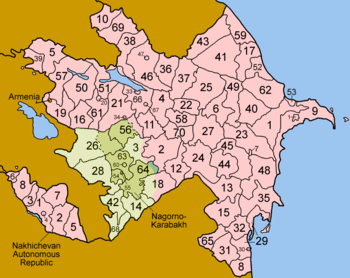 The territory of Nagorno-Karabakh presently forms part of Azerbaijani rayons Khojavend, Shusha, Khojaly, the east portion of Kalbajar and the west portion of Tartar. In Soviet times the region was known as Nagorno-Karabakh Autonomous Oblast; however on November 26, 1991, the Parliament of the Azerbaijan SSR abolished the autonomous status of the NKAO. Since then the territory of the autonomous oblast has been administratively split between the aforementioned rayons.

As a result of the Nagorno-Karabakh War, most of its territory is now under the control of ethnic Armenian forces from Nagorno-Karabakh and Armenia.[2] The self-proclaimed Nagorno-Karabakh Republic (NKR) also controls a large part of southwestern Azerbaijan outside Nagorno-Karabakh. The Azerbaijani rayons completely or partially in the NKR are noted in the list. The NKR does not recognise these rayons and has its own system of administrative division.

The list below is for the main part of Azerbaijan, excluding the rayons of Nakhchivan Autonomous Republic.

The seven districts and one municipality of the Nakhchivan Autonomous Republic are listed below.