Admiralty Arch, seen from The Mall 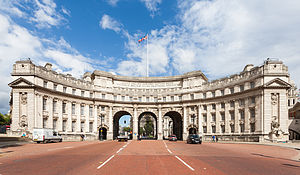 View during the day

Admiralty Arch is a landmark building in London which incorporates an archway providing road and pedestrian access between The Mall, which extends to the South-West, and Trafalgar Square to the North-East. Admiralty Arch is a Grade I listed building. Until recently, the building housed government offices, but in 2012 the government sold a 125-year lease over the building to a property developer Prime Investors Capital for redevelopment into a luxury hotel.[1]

The arch was designed by Sir Aston Webb, constructed by John Mowlem & Co and completed in 1912.[2] It adjoins the Old Admiralty Building, hence the name. The building was commissioned by King Edward VII in memory of his mother Queen Victoria, although he did not live to see its completion. A Latin inscription along the top reads: 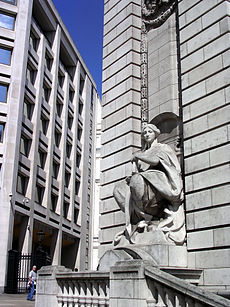 The sculptural figures of Navigation and Gunnery were designed by the English sculptor Sir Thomas Brock.

In 2000, the Cabinet Office moved into offices in the building, while maintaining its headquarters on Whitehall. It was also home to the Prime Minister's Strategy Unit and the Social Exclusion Task Force.[3] In 2011, as part of the government's austerity programme, the building became vacant and was put up for sale[4] for a reported £75 million. In October 2012, the winning bidder was reported to be Spanish real estate developer Rafael Serrano, who planned to turn the property into a luxury hotel. The property was sold as a 125-year lease.[5] In August 2013, Westminster City Council granted full planning permission for the restoration and conversion of Admiralty Arch into a 100-room hotel, residences and private members' club.[6]

As the ceremonial entrance from Trafalgar Square to The Mall, itself the ceremonial road leading up to Buckingham Palace, Admiralty Arch plays an important role on ceremonial occasions. Processions at royal weddings, funerals, coronations and other public processions such as the 2012 processions at the end of the Olympic and Paralympic Games all passed under its arches.[7] 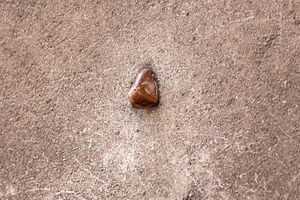 On the inside wall of the northernmost arch is a small protrusion the size and shape of a human nose. It was placed there by artist Rick Buckley in 1997 as part of a campaign against the "Big Brother" society. The nose is at a height of about seven feet, and sits at waist height for anyone riding through the arch on a horse. Prior to Buckley being unmasked in 2011 by the London Evening Standard, an urban myth grew that the nose is there in honour of the Duke of Wellington, who was known for having a particularly large nose.[8][not in citation given]