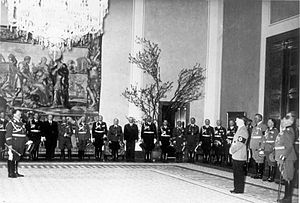 The 50th birthday of Adolf Hitler on 20 April 1939 was celebrated as a national holiday throughout Nazi Germany and other parts of the world. Gifts and telegrams of congratulations were received from all over Germany and allied countries, although the Western Allies ignored the event diplomatically. The birthday celebration saw, amongst other events, the largest military parade in the history of the Third Reich, with army, air force, navy and SS units, numbering almost 50,000 in total, marching through the streets of Berlin in Hitler's honor. 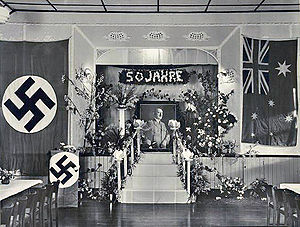 Celebration of Hitler's 50th birthday in a German club in Australia

On 18 April 1939, the government of Nazi Germany declared that their Führer Adolf Hitler's birthday (20 April) to be a national holiday.[1] Festivities took place in all municipalities throughout the country, as well as in the Free City of Danzig. The British historian Ian Kershaw comments that the events organised in Berlin by the Nazi minister of propaganda Joseph Goebbels were "an astonishing extravaganza of the Führer cult. The lavish outpourings of adulation and sycophancy surpassed those of any previous Führer Birthdays."[1]

Festivities began in the afternoon on the day before his birthday, when Hitler rode in the lead car of a motorcade of fifty white limousines along architect Albert Speer's newly completed East-West Axis, the planned central boulevard for Welthauptstadt Germania, which was to be the new capital after the planned victory in World War II.[1] Hitler, anticipating that Speer would give a speech, was amused when he evaded this by briefly announcing that the work should speak for itself.[2] The next event was a torchlit procession of appointments from all over Germany, which Hitler reviewed from a balcony in the Reich Chancellery.[1] Then, at midnight, Hitler's courtiers congratulated him and presented him with gifts, including, "Statues, bronze casts, Meissen porcelain, oil-paintings, tapestries, rare coins, antique weapons, and a mass of other presents, many of them kitsch. Hitler admired some, made fun of others, and ignored most."[1]

Speer presented Hitler with a scale model of the gigantic triumphal arch planned for the rebuilding of Berlin,[3] and Hitler's pilot, Hans Baur, gave him a model of the "Führer Machine", a four-engined Focke-Wulf 200 which was to go into service later that year as Hitler's official airplane.[4] 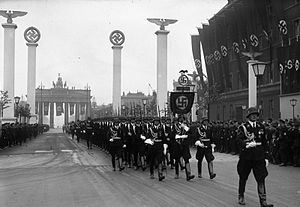 A key part of the birthday celebrations was the large demonstration of Nazi Germany's military capabilities. The display was intended in part as a warning to the Western powers.[1] The parade, which lasted about five hours, included 12 companies of the Luftwaffe, 12 companies of the army, and 12 companies of the navy, as well as units of the Schutzstaffel (SS). In total, 40,000 to 50,000 German troops took part.[5][6] 162 warplanes flew over Berlin.[6] The grandstand comprised 20,000 official guests,[7] and the parade was watched by several hundred thousand spectators.[5] Features of the parade were large long range air defence artillery guns, emphasis on motorized artillery and development of air defense units.[8] Joseph Goebbels, the event's organizer,[9] declared in a broadcast address to the German people:

The Reich stands in the shadow of the German sword. Trade and industry, and cultural and national life flourish under the guarantee of the military forces. The name of Herr Hitler is our political programme. Imagination and realism are harmoniously combined in the Führer.[7]

Military leaders throughout the country gave addresses to their troops to celebrate the occasion. Some, such as Major General (later Generalfeldmarschall) Erich von Manstein, were especially effusive in their praise for their supreme commander.[10] Official guests representing 23 countries took part in the celebrations. Papal envoy Cesare Orsenigo, the President of the Slovak Republic Jozef Tiso, the heads of the branches of Nazi Germany's armed forces, and mayors of German cities offered birthday congratulations at the chancellery.[5][6] Hitler and Italian dictator Benito Mussolini exchanged telegrams assuring each other that the friendship between Germany and the Kingdom of Italy (both ruled by fascist regimes at the time) could not be disturbed by their enemies.[11] The ambassadors of the United Kingdom, France and the United States were not present at the parade, having been withdrawn after Hitler's march into Czechoslovakia in 1938.[1] The U.S. was represented at the troop review by chargé d'affaires Raymond H. Geist.[6] U.S. President Franklin D. Roosevelt did not congratulate Hitler on his birthday, in accordance with his practice of not sending birthday greetings to anyone but ruling monarchs.[12] King George VI of the United Kingdom dispatched a message of congratulation to Hitler; but due to the strained relations between the two countries, his advisors had considered whether the King should ignore the birthday altogether.[13] There was no Polish representation at the parade.[1] 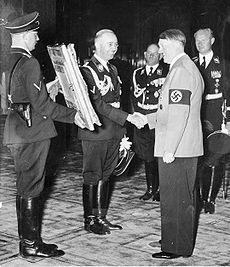 A luxury edition of Hitler's political manifesto and autobiography Mein Kampf published in 1939 in honor of his 50th birthday was known as the Jubiläumsausgabe ("Anniversary Issue"). It came in both dark blue and sharp red boards with a gold sword on the cover.[14] The German author and photographer Heinrich Hoffmann wrote a book about Hitler's 50th birthday, entitled Ein Volk ehrt seinen Führer ("A Nation Honors Her Leader"). Composer Hans Rehberg wrote a hymn for the occasion.[15] A film of the birthday celebration, Hitlers 50. Geburtstag ("Hitler's 50th Birthday"), is regarded as an important example of Nazi propaganda; it was subsequently shown to packed audiences at Youth Film Hours, which were held on Sundays.[16]

The Free City of Danzig made Hitler an honorary citizen of the city as a birthday gift. Hitler received the citizenship papers from the hands of Albert Forster, the city's Nazi leader.[9] Political and military tension between Germany and Poland was heightened at the time, and Time Magazine reported the possibility of Danzig being returned to Germany.[17] Martin Bormann, Hitler's private secretary, had the Eagle's Nest constructed as the Nazi Party's birthday gift. Hitler, however, did not like the location, as he had a fear of heights.[18] Because of his indigestion, Hitler did not drink alcohol, so a Munich brewery created a special batch of low alcohol beer for his birthday. The brew became a regular order.[19]

On the occasion of his birthday, families with small incomes received a birthday gift of 15 German Reichsmarks, plus 5 Reichsmarks for every dependent, an expenditure totalling 13 million Reichsmarks.[20]