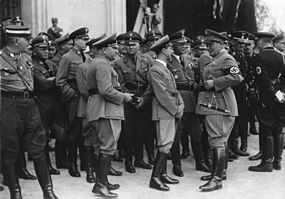 RSD bodyguards mingling during the arrival of Joseph Goebbels and Hermann Göring, 1936

Adolf Hitler, the dictator of Nazi Germany, was at the centre of World War II in Europe and the Holocaust. He was hated by his persecuted enemies and even by some of his own military commanders, yet in 25 years no one managed to assassinate him. In contrast to Britain's Winston Churchill, who relied on one main bodyguard, Hitler's bodyguard grew to include thousands of men.[1]

When Hitler returned to Munich from military service in 1918, he became a member of the Nazi Party, an extremist far-right political party in Bavaria. In 1921, he was elected leader of the party. As his speeches promoted violence and racism, Hitler needed permanent security.

Founded in 1920, the Sturmabteilung (SA) was the first of many paramilitary protection squads that worked to protect Nazi officials. In 1923, a small bodyguard unit, which became known as the Stosstrupp-Hitler (SSH), was set up specifically for the Führer. It was under the control of the SA. Then in 1925, as the Nazi Party grew, the Schutzstaffel (SS) was created as a sub-section of the SA. Initially only about a hundred men, it was also originally a personal protection unit for Hitler. Several other bodyguard organisations, such as the Führerbegleitkommando (FBK), Leibstandarte SS Adolf Hitler (LSSAH) and Reichssicherheitsdienst (RSD) were created as sub-sections of the SS. Police forces available for security included the Geheime Staatspolizei (Gestapo), Ordnungspolizei (Orpo), Kriminalpolizei (Kripo) and Sicherheitspolizei (SiPo). In addition, the Nazi intelligence organization, the Sicherheitsdienst (SD), was formed to investigate and perform security checks on people, including party members. If the SD personnel determined an arrest was to be made, they passed the information on to the Gestapo, who made the arrest.

As Hitler began to put his aggressive plans outlined in his political manifesto Mein Kampf ("My Struggle") into action, the number of his enemies expanded. To combat this threat, his bodyguard commanders established a structure that was followed throughout the rest of World War II.

Adolf Hitler was 29 years old in 1918, when he returned to Munich after Germany's humiliating defeat in World War I. Like many other German veterans at the time, he felt bitter and frustrated; believing the widely held "Stab-in-the-back myth", that the German Army did not lose the war on the battle field but on the home-front due to the communists and Jews.[2]

The 1930s were a time of civil unrest in Germany, compounded by the economic problems of the Great Depression. In this environment, a number of extremist political parties were formed, including the German Workers' Party (DAP), a short-lived predecessor of the Nazi Party.[3] Sensing an opportunity, Hitler decided to join the DAP, which was renamed the Nazi Party in 1920.[4] His talent for charismatic oratory led to him being chosen the leader of the party the following year.[5] Like many autocratic rulers, he surrounded himself with guards for protection.[6]

One night in 1933, while traveling in Munich, Hitler became aware of a large car following his own. He told his driver Erich Kempka to accelerate the supercharged Mercedes-Benz, so the other car could not keep up. It turned out that the car pursuing Hitler was full of RSD bodyguards, who had not thought to inform the Führer or any of his immediate entourage.[19] Hitler was enraged; he had always been suspicious of the Bavarian police, who had come close to killing him during the failed putsch attempt.[1]

Hitler wanted the RSD abolished, but Himmler managed to talk him out of it, promising structural changes and overall improvements to prevent such an incident from happening again. Thereafter, the RSD remained in overall charge of Hitler's personal security.[1]

As Hitler went from being a stateless street politician to supreme leader of Nazi Germany, the responsibilities of his bodyguard expanded enormously. The ring of bodyguard leaders in the Führer's inner circle eventually established a routine.[1]

Everywhere Hitler went, he was accompanied by men of the FBK. They worked in three eight-hour shifts, providing close protection of Hitler. Before a trip or important public event, the RSD checked the route, the buildings along it, and the places which Hitler was to visit.[1] The local Gestapo office provided intelligence reports, along with information as to any assassination rumours, to the RSD.[36] Orpo police officers were called in as necessary to help with security. As far as possible, the streets or approaches to a building were lined with uniformed SS men, with every third man facing the crowd. There were marksmen on the roofs while plainclothes RSD men or Kripo undercover police mingled with the crowd. Hitler's motorcade was preceded by a single pilot car to alert the guards to stand at attention. Hitler's car, usually an open Mercedes-Benz, followed 50 metres behind. Hitler always stood or sat in the front seat, beside the driver, with a FBK member and an adjutant behind him. Following his car were two cars to the left and right, one with the rest of the FBK and the other with a detachment of RSD men. Then came the car of other Nazi chieftains and/or SS leaders; after a further 100-metre gap came the car with foreign guests.[1]

The LSSAH guarded Hitler's private residences and offices, providing an outer ring of protection for the Führer and his visitors.[37] Buildings protected included the old Reich Chancellery, the new Reich Chancellery, and the Berghof in the Obersalzberg of the Bavarian Alps near Berchtesgaden, Bavaria. LSSAH men manned sentry posts at the entrances to the old Reich Chancellery and the new Reich Chancellery. The Orpo police also had sentry posts inside, where people's passes and identity cards were checked.[38] The RSD were responsible for having the Gestapo and Kripo run security checks on any employees and workers.[39] They were assisted by the SD, which investigated and monitored people for subversive activities and passed the information gathered on to the Gestapo for action when needed.[40] Wherever Hitler was in residence, members of the RSD and FBK would be present. The RSD men patrolled the grounds and the FBK men provided close security protection. For special events, the number of LSSAH guards were increased.[41] At the Berghof residence in the Obersalzberg, a large contingent of the LSSAH were housed in adjacent barracks. They patrolled an extensive cordoned security zone that encompassed the nearby homes of other Nazi leaders. Further, the nearby former hotel "Turken" was turned into quarters to house the RSD.[42] The FBK men provided close security protection inside the Berghof.[1]

After the war started, the FBB provided wider security protection for Hitler as he travelled by vehicle to front-line command posts and military headquarters. They would be in heavily armed vehicles at the front and back of Hitler's convoy. In addition, army motorcycle riders were part of the convoy. The RSD were responsible for checking the route, and the FBK would ride with Hitler during the trip.[1]

On 8 November 1939, Hitler went to the Bürgerbräukeller beer hall in Munich for the annual anniversary celebration of the attempted putsch of 1923. He began speaking just after 8:00 pm, earlier than usual because he had urgent business in Berlin. He left the hall at around 9:07 pm. Twelve minutes later, a time bomb which had been concealed inside a pillar behind the speaker's rostrum exploded, killing eight and injuring sixty.[43] The man behind the elaborate assassination attempt was Johann Georg Elser, a cabinet maker and ardent communist from Baden-Württemberg. He was apprehended near the Swiss border and interrogated by the Gestapo before being sent to Dachau concentration camp. He was executed on 9 April 1945.[43] The assassination attempt was an embarrassment for the RSD, who were responsible for checking the venue prior to Hitler's speech. In the Gestapo investigation, and 60-page report which followed, it was determined that the RSD, Gestapo, and SS needed to work more closely together in protection procedures for Hitler.[1]

On 13 March 1943, in preparation for the Battle of Kursk, Hitler visited the Eastern Front at Smolensk. Upon leaving, staff officer Heinz Brandt, who was traveling in Hitler's entourage, agreed to take a box containing two expensive bottles of wine back to Berlin. The package was given to him by General Henning von Tresckow, a member of the Nazi resistance group, who had carefully hidden a bomb inside one of the bottles. The plane took off with both Hitler and Brandt on board, but it arrived safely at the Wolf's Lair field headquarters in East Prussia. The bomb most likely failed to detonate because of the freezing temperatures in the storage compartment of the plane.[1]

Hitler's most famous military headquarters during the war was the Wolf's Lair (Wolfsschanze). He spent more time at that Eastern Front military field headquarters than any other. Hitler first arrived at the headquarters in June 1941. In total, he spent more than 800 days there during a ​3 1⁄2-year period until his final departure on 20 November 1944.[44] It was guarded by personnel from the RSD and FBB.[45]

It had several security zones. Sperrkreis 1 (Security Zone 1) was located at the heart of the Wolf's Lair. Ringed by steel fencing and guarded by RSD and FBK men, it contained Hitler's bunker and ten other camouflaged bunkers built from 2 metres (6 ft 7 in) thick steel-reinforced concrete.[46] Sperrkreis 2 (Security Zone 2) surrounded the inner zone. This area housed the quarters of several Reich ministers and the HQ personnel, as well as the military barracks for the FBB. Sperrkreis 3 (Security Zone 3) was a heavily fortified outer security area which surrounded the two inner zones. It was defended by land mines and the FBB, which manned guard houses, watchtowers and checkpoints.[45] Despite the security, the most notable assassination attempt against Hitler was made at the Wolf's Lair on 20 July 1944.[47]

With Germany suffering major defeat on all fronts, Colonel Claus von Stauffenberg and his ring of conspirators decided to eliminate Hitler and the Nazi leadership, establish a new pro-Western government and save the country from destruction.[48] On 20 July 1944, during a military conference at the Wolf's Lair, Stauffenberg planted a briefcase bomb underneath Hitler's conference table and then quickly left, claiming he had to make an important telephone call. Shortly after, the bomb exploded, fatally wounding three officers and the stenographer, who died soon after. Hitler survived with only minor injuries, as did everyone else who was shielded from the blast by the conference table leg.[49]

The FBB closed the Security Zone checkpoints, but by then Stauffenberg's car had been let through two of them as he left the area. Contrary to the imposed security doctrines in place, Stauffenberg and his adjutant were able to pass through the Security Zone 3 checkpoint and proceed to the airport, succeeding in getting away before clarity could be established back at the now completely demolished briefing hut.[45]