Adolf Hitler, dictator of Nazi Germany and at the center of World War II in Europe, earned millions of Reichsmarks throughout his political career, mainly through sales of his book Mein Kampf ("My Struggle") and his combined Chancellor and President salaries. After coming to power, Hitler moved to make himself tax-exempt.

Adolf Hitler was born on 20 April 1889 and grew up in Braunau am Inn, a small Austrian village on the border with Germany.[1] His family was rather poor and three of his siblings—Gustav, Ida and Otto— died in infancy due to common childhood diseases.[2] Hitler's father, Alois, unsuccessfully tried to established a farm, and his wife, Klara, was a housewife.[3] In 1913, Hitler received legacies from his deceased relatives and decided to move to Munich, a large German city located in Bavaria.[4]

The Courtyard of the Old Residency in Munich, painting by Hitler from 1914

Once in Munich, Hitler lived a Bohemian life alongside his childhood friend August Kubizek.[5] The two shared a room rented from a local tailor. Hitler painted pictures, watercolors and copied postcards and sold them to tourists for the small profit.[5] In 1907, he applied to join Vienna's Academy of Fine Arts, but was rejected for a "lack of talent".[6] In 1908, Hitler tried again, but was once more rejected.[6] Shortly afterwards, Hitler ran out of money and was forced to live in homeless shelters and men's hostels.[4]

Hitler wrote his political manifesto and autobiography Mein Kampf ("My Struggle") in Landsberg prison while serving a sentence for high treason as a result of the failed Beer Hall Putsch of 1923.[4] The book was printed by the Franz Eher Nachfolger publishing house and largely ignored at first, but sales began to boom in the late 1920s and early 1930s as economic depression and social unrest troubled Germany, factors which significantly boosted Hitler's popularity.[7] After Hitler came to power in 1933, couples who married under the Nazi state were given a copy as a wedding gift.[7] The book eventually became a best-seller within Nazi Germany, selling almost twelve million copies by the war's end.[8]

While hyperinflation of the Weimar Republic had crippled the German economy and plunged millions of German workers into unemployment, Hitler and his party received lavish donations from wealthy benefactors at home and abroad.[7] The iconic American car maker and anti-Semite Henry Ford was reported to be one of the foreign supporters.[7] de (Helene Bechstein), part of a rich aristocratic family who sold pianos, supported Hitler financially and gave him a top hat and business suit.[7] The Ruhr steel barons Fritz Thyssen and Gustav Krupp donated almost five million Reichsmarks to the Nazi Party over the course of the war.[7] 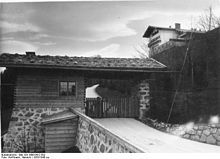 The Berghof, Hitler's private retreat, was renovated at a massive cost, all of it paid for with Nazi Party donations

Much of the party donations were used to pay off many of Hitler's private projects, such as the Berghof and Eagles Nest.[7] He caused a minor controversy within leading elements of the party when he, in 1925, purchased a luxury Mercedes-Benz and a chauffeur to drive it for a total expenditure of 20,000 Reichsmarks.[7] After examining Hitler's tax records from the Bavarian State Archives in Munich, economics journalist Wolfgang Zdral said, "His driving a Mercedes, which cost incredible amounts of money at the time, can afford to go on travels and has enough money to finance his propaganda appearances. All of this is financed through a system of slush-funds, essentially the donation of larger and smaller benefactors".[7]

Throughout his rise to power, Hitler neglected to pay taxes on his income and allowances.[9] In 1934, one year after becoming Chancellor, the tax office of Munich sent Hitler a fine of 405,494.00 Reichsmarks for not paying taxes nor properly declaring his income.[7] He was given only eight days to pay off this debt.[7] The new Chancellor responded by ordering a state secretary of the ministry of finance to intervene, which resulted in Hitler becoming tax-free. The head of the Munich tax office declared, "all tax reports delivering substance for a tax obligation by the Führer are annulled from the start. The Führer is therefore tax-exempt".[7] After the death of President Paul von Hindenburg, Hitler took over his office and claimed his salary as well.[7]

In his last will and testament, Hitler said regarding his personal earnings, "what I own, as far as it is worth anything, belongs to the party. Should this no longer exist, the German state. Should the state also be destroyed, there is no need for a further decision on my part".[7]