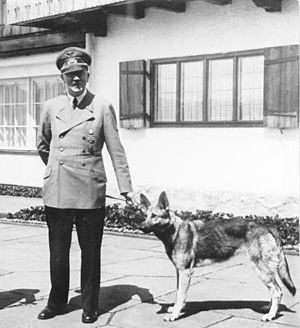 Towards the end of his life Adolf Hitler followed a vegetarian diet. It is not clear when he adopted it, since some accounts of his dietary habits prior to the Second World War indicate that he consumed meat as late as 1937. By 1938, Hitler's public image as a vegetarian was already being fostered and from 1942 he self-identified as a vegetarian. Personal accounts from people who knew Hitler and were familiar with his diet indicate that he did not consume meat as part of his diet during this period. Some modern day analysis has theorized that Hitler's vegetarianism may have been due to Richard Wagner's historical theories, or even a psychological reaction to his niece's death rather than a commitment to animal welfare, but these theories are contradicted by reports that he was often distressed by images of animal cruelty and suffering, as well as being an antivivisectionist.

In a 1937 article, The New York Times noted "It is well known that Hitler is a vegetarian and does not drink or smoke. His lunch and dinner consist, therefore, for the most part of soup, eggs, vegetables and mineral water, although he occasionally relishes a slice of ham and relieves the tediousness of his diet with such delicacies as caviar ...".[2] In November 1938, an article for the English magazine Homes & Gardens describing Hitler's mountain home, The Berghof, stated that in addition to being a teetotaler and a non-smoker, Hitler was also a vegetarian. Ignatius Phayre wrote, "A life-long vegetarian at table, Hitler's kitchen plots are both varied and heavy in produce. Even in his meatless diet Hitler is something of a gourmet — as Sir John Simon and Anthony Eden were surprised to note when they dined with him in the Chancellery at Berlin. His Bavarian chef, Herr Kannenberg, contrives an imposing array of vegetarian dishes, savoury and rich, pleasing to the eye as well as to the palate, and all conforming to the dietic standards which Hitler exacts."[3]

According to stenographic transcripts translated by Hugh Trevor-Roper of conversations between Hitler and his inner circle which took place between July 1941 and November 1944, Hitler regarded himself as a vegetarian. These conversations were gathered together under the title Hitler's Table Talk. Written notes taken at the time were transcribed and then were edited by Martin Bormann.[4] According to these transcripts dated 11 November 1941, Hitler said, "One may regret living at a period when it's impossible to form an idea of the shape the world of the future will assume. But there's one thing I can predict to eaters of meat: the world of the future will be vegetarian." On 12 January 1942, he said, "The only thing of which I shall be incapable is to share the sheiks' mutton with them. I'm a vegetarian, and they must spare me from their meat."[5] In a diary entry dated 26 April 1942, Joseph Goebbels described Hitler as a committed vegetarian, writing,

An extended chapter of our talk was devoted by the Führer to the vegetarian question. He believes more than ever that meat-eating is harmful to humanity. Of course he knows that during the war we cannot completely upset our food system. After the war, however, he intends to tackle this problem also. Maybe he is right. Certainly the arguments that he adduces in favor of his standpoint are very compelling.[6]

In his table talks, on 25 April 1942 at midday, Hitler addresses the issue of vegetarianism and spoke about Roman soldiers eating fruits and cereals and the importance of raw vegetables. He places the emphasis on scientific arguments such as naturalists' observations and chemical efficacy.[7] Notes from the interrogation of Hitler's personal aides about his daily routine in 1944 reveal that after midnight Eva Braun would "direct that there should be another light snack of turtle soup, sandwiches, and sausages"; however, turtle soup was one of Braun's favourite dishes and the interrogation notes do not indicate if Hitler shared the supper.[8][9] Hitler also disapproved of cosmetics since they contained animal by-products, and he frequently teased Braun about her habit of wearing makeup.[5]

All accounts by people familiar with Hitler's diet from 1942 onwards are in agreement that Hitler adhered to a vegetarian diet, but accounts of his diet prior to the Second World War are inconsistent in this regard with some stating he ate meat. Princess Sophie of Greece and Denmark met with Hitler in 1932 and wrote in her memoirs that she been "warned he was a vegetarian, and found it difficult to plan an appropriate meal",[10] but this is contradicted by Dione Lucas, a chef at a Hamburg hotel patronised by Hitler prior to the war, who claimed that her stuffed squab was a favourite of his.[11] According to Ilse Hess (wife of Rudolph Hess), in 1937 Hitler ceased eating meat except for liver dumplings.[12] Margot Wölk, who became his unwilling food taster in 1942, stated that all the food she tested for Hitler was vegetarian, and she recalled no meat or fish.[13][14]

Traudl Junge, who became Hitler's secretary in 1942, reported that he "always avoided meat" but that his Austrian cook Kruemel sometimes added a little animal broth or fat to his meals. "Mostly the Fuehrer would notice the attempt at deception, would get very annoyed and then get tummy ache," Junge said. "At the end he would only let Kruemel cook him clear soup and mashed potato."[15] In addition, Marlene von Exner, who became Hitler's dietician in 1943, reportedly added bone marrow to his soups without his knowledge because she "despised" his vegetarian diet.[16]

Prior to the Second World War there are many accounts of Hitler eating meat, including stuffed squab, Bavarian sausages and caviar.[11][17] According to Ilse Hess, in 1937 Hitler ceased eating all meat except for liver dumplings,[12] an account that Dr. Kalechofsky found "consistent with other descriptions of Hitler's diet, which always included some form of meat, whether ham, sausages or liver dumplings." [18] Frau Hess's comments are also backed up by several biographies about Hitler, with Fritz Redlich noting that Hitler "avoided any kind of meat, with the exception of an Austrian dish he loved, Leberknödl (liver dumpling)".[19] Thomas Fuchs concurred, observing that a "typical day's consumption included eggs prepared in any number of ways, spaghetti, baked potatoes with cottage cheese, oatmeal, stewed fruits and vegetable puddings. Meat was not completely excluded. Hitler continued to eat a favourite dish, Leberkloesse (liver dumplings)." [20]

Today, it is acknowledged by historians that Hitler - at least during the war - followed a vegetarian diet.[21][22] At social events he sometimes gave graphic accounts of the slaughter of animals in an effort to make his dinner guests shun meat.[16] An antivivisectionist, Hitler may have followed his selective diet out of a profound concern for animals.[23] Bormann had a greenhouse constructed near the Berghof (near Berchtesgaden) to ensure a steady supply of fresh fruit and vegetables for Hitler throughout the war.[24]

In the BBC series The Nazis: A Warning from History, an eyewitness account tells of Hitler watching movies (which he did very often). If ever a scene showed (even fictional) cruelty to or death of an animal, Hitler would cover his eyes and look away until someone alerted him the scene was over. The documentary also commented on the German animal welfare laws that the Nazis introduced, which were unparalleled at the time.[25] The German psychoanalyst, Erich Fromm, believed that Hitler's vegetarianism was actually a means of atoning for the death of his half-niece Geli Raubal, as well as a means of proving to himself and others that he was incapable of killing.[26]

It has also been theorized that Hitler's diet may have been based on Richard Wagner's historical theories[27] which connected the future of Germany with vegetarianism.[28] In the book, The Mind of Adolf Hitler by Walter C. Langer, it is said:

"If he (Hitler) does not eat meat, drink alcoholic beverages, or smoke, it is not due to the fact that he has some kind of inhibition or does it because he believes it will improve his health. He abstains from these because he is following the example of the great German, Richard Wagner, or because he has discovered that it increases his energy and endurance to such a degree that he can give much more of himself to the creation of the new German Reich."[29]

Nazi leaders were noted for love of their pets and for certain animals, notably apex predators like the wolf and the lion. Hitler, a vegetarian and hater of hunting, adored dogs and spent some of his final hours in the company of Blondi, whom he would take for walks outside the bunker at some danger to himself. He had a particular enthusiasm for birds and most of all for wolves. [...] Goebbels said, famously, ‘The only real friend one has in the end is the dog. . . The more I get to know the human species, the more I care for my Benno.’ Goebbels also agreed with Hitler that ‘meat eating is a perversion in our human nature,’ and that Christianity was a ‘symptom of decay’, since it did not urge vegetarianism. [...] On the one hand, monsters of cruelty towards their fellow humans; on the other, kind to animals and zealous in their interest. In their very fine essay on such contradictions, Arnold Arluke and Boria Sax offer three observations. One, as just noted, many Nazi leaders harboured affection towards animals but antipathy to humans. Hitler was given films by a maharaja which displayed animals killing people. The Führer watched with equanimity. Another film showed humans killing animals. Hitler covered his eyes and begged to be told when the slaughter was over.[30]