From Infogalactic: the planetary knowledge core
Jump to: navigation, search
For the Syrian poet, see Adunis.
For other uses, see Adonis (disambiguation). 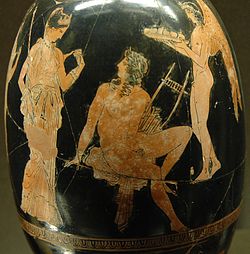 Adonis (/əˈdɒnɪs, əˈdoʊnɪs/; Greek: Ἄδωνις), in Greek mythology, is a central figure in various mystery religions.[citation needed] In 1966, Wahib Atallah wrote that the "cult of Adonis belonged to women", and further asserted "the cult of dying Adonis was fully developed in the circle of young girls around Sappho on Lesbos, about 600 BC, as a fragment of Sappho reveals."[1]

There has been much scholarship over the centuries concerning the multiple roles of Adonis, if any, and his meaning and purpose in Greek religious beliefs. Modern scholarship sometimes describes him as an annually renewed, ever-youthful vegetation god, a life-death-rebirth deity whose nature is tied to the calendar.[2] His name is often applied in modern times to handsome youths, of whom he is the archetype. 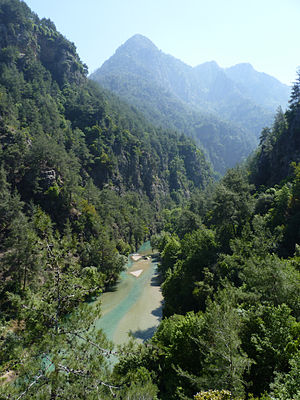 Abraham River (Lebanon), one of the claimed sites of Adonis

The Greek Ἄδωνις (Greek pronunciation: [ádɔːnis]), Adōnis was a borrowing from the Canaanite word ʼadōn, meaning "lord",[3][4] which is related to Adonai (Hebrew: אֲדֹנָי‎), one of the names used to refer to the God of the Hebrew Bible and still used in Judaism to the present day.[4] Syrian Adonis is Gauas[5] or Aos, akin to Egyptian Osiris, the Semitic Tammuz and Baal Hadad, the Etruscan Atunis and the Phrygian Attis, all of whom are deities of rebirth and vegetation (see life-death-rebirth deity).

Circa the sixth century BC, the appearance of the cult of Adonis is reported in Jerusalem by the biblical Book of Ezekiel, although under the Babylonian name Tammuz.[6] 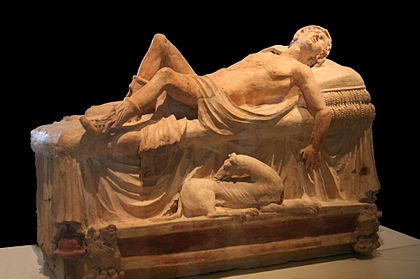 The most detailed and literary version of the story of Adonis is a late one, in Book X of Ovid's Metamorphoses.[7]

The central myth in its Greek telling: Smyrna, daughter of Theias, king of Assyria, conceives a child by him through trickery. Theias finds out and is determined to kill her, when the gods intervene and turn her into a myrrh tree. Nine months later the baby Adonis comes out of the tree. Aphrodite fell in love with the beautiful youth (possibly because she had been wounded by Eros' arrow). Aphrodite sheltered Adonis as a new-born baby and entrusted him to Persephone. Persephone was also taken by Adonis' beauty and refused to give him back to Aphrodite. The dispute between the two goddesses was settled by Zeus (or by Calliope on Zeus' behalf): Adonis was to spend one-third of every year with each goddess and the last third wherever he chose.[8] He chose to spend two-thirds of the year with Aphrodite. 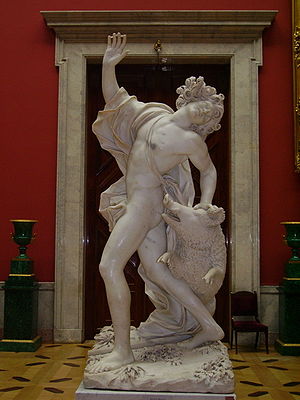 The Death of Adonis, by Giuseppe Mazzuoli, 1709 (Hermitage Museum).

Adonis was killed by a wild boar, said to have been sent variously by Artemis, jealous of Adonis' hunting skills or in retaliation for Aphrodite instigating the death of Hippolytus, a favorite of the huntress goddess; or by Aphrodite's paramour, Ares, who was jealous of Aphrodite's love for Adonis; or by Apollo, to punish Aphrodite for blinding his son, Erymanthus.[9] Adonis died in Aphrodite's arms, who came to him when she heard his groans.

When he died she sprinkled the blood with nectar, from which sprang the short-lived anemone, which takes its name from the wind which so easily makes its petals fall. And so it is the blood of Adonis that each spring turns to red the torrential river, the Adonis River (also known as Abraham River or Nahr Ibrahim in Arabic) in modern Lebanon. Afqa is the sacred source where the waters of the river emerge from a huge grotto in a cliff 200 metres (660 feet) high. It is there that the myth of Astarte (Venus) and Adonis was born.

Adonis's birth is shrouded in confusion for those who require a single, authoritative version, for various peripheral stories circulated concerning Adonis' parentage.

The most widely accepted version is recounted in Ovid's Metamorphoses, where Adonis is the son of Myrrha and her father Cinyras. Myrrha turned into a myrrh tree and Lucina helped the tree to give birth to Adonis.[10]

The patriarchal Hellenes sought a father for the god, and found him in Byblos and Cyprus, which scholars take to indicate the direction from which Adonis had come to the Greeks. Pseudo-Apollodorus, (Bibliotheke, 3.182) considered Adonis to be the son of Cinyras, of Paphos on Cyprus, and Metharme. According to pseudo-Apollodorus' Bibliotheke, Hesiod, in an unknown work that does not survive, made of him the son of Phoenix and the otherwise unidentified Alphesiboea.[11]

In Cyprus, the cult of Adonis gradually superseded that of Cinyras.[12] Hesiod made him the son of Phoenix, eponym of the Phoenicians, thus a figure of Phoenician origin; his association with Cyprus is not attested before the classical era. W. Atallah[13] suggests that the later Hellenistic myth of Adonis represents the conflation of two independent traditions.

Alternatively the late source Bibliotheke calls him the son of Cinyras and Metharme. Another version of the myth is that Aphrodite compelled Myrrha (or Smyrna) to commit incest with her father Theias, the king of Assyria. Fleeing his wrath, Myrrha was turned into a myrrh tree. Theias struck the tree with an arrow, whereupon it burst open and Adonis emerged. Another version has a wild boar tear open the tree with its tusks, thus foreshadowing Adonis' death.

The city Berytos (Beirut) in Lebanon was named after the daughter of Adonis and Aphrodite, Beroe. Both Dionysus and Poseidon fell in love with her. She would eventually marry Poseidon. 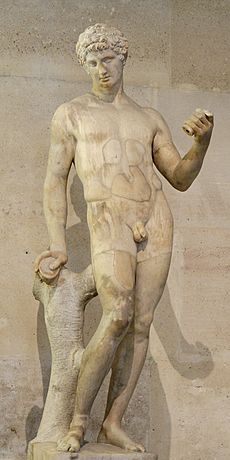 Adonis, a naked Roman torso, restored and completed by François Duquesnoy, formerly in the collection of Cardinal Mazarin (Louvre Museum).

Origin of the cult

In Greek mythology, Adonis was from Phoenicia. He was born and died at the foot of the falls in the village of Afqa, located in the Jbeil District of the Mount Lebanon Governorate, 71 kilometres (44 mi) northeast of Beirut in modern-day Lebanon. The ruins of the celebrated temple of Aphrodite Aphakitis— the Aphrodite particular to this site— are located there.

There are some who believe Adonis may have been based, in part, on Tammuz.[citation needed][citation needed] The name is similar to a Semitic word—adon (which means "lord").[14] Yet there is no trace of a Semitic deity directly connected with Adonis,[15] and no trace in Semitic languages of any specific mythemes connected with his Greek myth; both Greek and Near Eastern scholars have questioned the connection.[16] In practice, the connection is with Adonis' Mesopotamian counterpart, Tammuz, as asserted by Burkert:

Women sit by the gate weeping for Tammuz, or they offer incense to Baal on roof-tops and plant pleasant plants. These are the very features of the Adonis legend: which is celebrated on flat roof-tops on which sherds sown with quickly germinating green salading are placed, Adonis gardens... the climax is loud lamentation for the dead god.[17]

When the legend of Adonis was incorporated into Greek culture is debated. Walter Burkert questions whether Adonis had not from the very beginning come to Greece with Aphrodite.[18] "In Greece," Burkert concludes, "the special function of the Adonis legend is as an opportunity for the unbridled expression of emotion in the strictly circumscribed life of women, in contrast to the rigid order of polis and family with the official women's festivals in honour of Demeter."

Adonis was worshiped in unspoken mystery religions: not until Imperial Roman times (in Lucian of Samosata, De Dea Syria, ch. 6[19]) does any written source mention that the women were consoled by a revived Adonis. The third century BC poet Euphorion of Chalcis in his Hyacinth wrote "Only Cocytus washed the wounds of Adonis".[20]

Women in Athens would plant "gardens of Adonis" quick-growing herbs that sprang up from seed and died. The Festival of Adonis was celebrated by women at midsummer by sowing fennel and lettuce, and grains of wheat and barley. The plants sprang up soon, and withered quickly, and women mourned for the death of the vegetation god.[21] 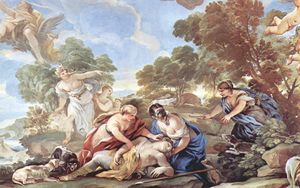 Death of Adonis, by Luca Giordano.

In relatively modern times, the myth of Adonis has featured prominently in a variety of cultural and artistic works. Giovan Battista Marino's masterpiece, Adone, published in 1623, is a long, sensual poem, which elaborates the myth of Adonis, and represents the transition in Italian literature from Mannerism to the Baroque. Percy Bysshe Shelley wrote the poem Adonais for John Keats, and uses the myth as an extended metaphor for Keats' death.

Such allusions continue today. Adonis (an Arabic transliteration of the same name, أدونيس) is the pen name of a famous Syrian poet, Ali Ahmad Said Asbar. His choice of name relates especially to the rebirth element of the myth of Adonis (also called "Tammuz" in Arabic), which was an important theme in mid-20th century Arabic poetry, chiefly amongst followers of the "Free Verse" (الشعر الحر) movement founded by Iraqi poet Badr Shakir al-Sayyab.[citation needed] Adunis has used the myth of his namesake in many of his poems, for example in "Wave I", from his most recent book "Start of the Body, End of the Sea" (Saqi, 2002), which includes a complete retelling of the birth of the god.[clarification needed]