From Infogalactic: the planetary knowledge core
Jump to: navigation, search
Not to be confused with the politician, a contemporary distant kinsman, Adrian Scrope (Royalist). 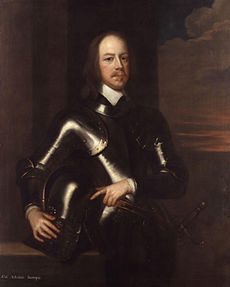 Portrait of Adrian Scope by (or after) Robert Walker

Colonel Adrian Scrope (c. 1601 – 17 October 1660) was the twenty seventh of the fifty nine Commissioners who signed the Death Warrant of King Charles I. He was hanged, drawn and quartered at Charing Cross after the restoration of Charles II.

Scrope matriculated at Hart Hall, Oxford, on 7 November 1617, and became a student of the Middle Temple in 1619.[1] In November 1624 he married Mary, daughter of Robert Waller of Beaconsfield, a sister of the poet Waller.[2]

At the opening of the civil war he raised a troop of horse for the parliament,[3] and in 1646 was major in the regiment of horse commanded by Colonel Richard Graves. When the army and parliament quarrelled Scrope took part with the soldiers, and possibly helped Joyce to carry off Charles I from Holdenby to Newmarket.[4] He succeeded to the command of the regiment about July 1647[5]

In June 1648, at the outbreak of the Second English Civil War, Scrope was ordered to join Colonel Whalley in the pursuit of the Earl of Norwich and the Kentish royalists, and he took part in the siege of Colchester.[6] At the beginning of July he was detached from Colchester to pursue the Earl of Holland, whom he defeated and took prisoner at St. Neots on 10 July.[7] He was then sent to suppress some disturbances at Yarmouth;[8] caused by the threatened landing of the Prince of Wales.

Scrope took part in the deliberations of the council of the army which resulted in the rupture of the treaty of Newport; was appointed one of the king's judges, and attended the meetings of the court with exemplary regularity. His name appears twenty-seventh among fifty nine judges who signed the death warrant.[9]

Scrope's regiment was one of those selected by lot for the expedition for the reconquest of Ireland (20 April 1649); but early in May 1649 they mutinied, refused to go to Ireland, and demanded the re-establishment of the representative council of agitators which had existed in 1647.[10] On 15 May Cromwell and Fairfax surprised the mutineers at Burford, and the ringleaders were tried by court-martial and shot.[11]

Scrope's regiment henceforth disappears from the army lists, and the soldiers composing it were probably drafted into other regiments. Scrope himself was made governor of Bristol (October 1649), a post which he held till 1655.[12] In 1655 Bristol Castle and other forts there were ordered to be demolished, in pursuance of a general scheme for diminishing the number of garrisons in England, though Ludlow asserts that Bristol was selected because Cromwell did not dare to "trust a person of so much honour and worth with a place of that importance".[13]

In May 1655 Scrope was appointed a member of the council established by the Protector for the government of Scotland, at a salary of £600. a year.[14] He did not distinguish himself as an administrator, and appears to have spent as much time as he could out of Scotland.[15] During the political revolutions of 1659–60 he apparently remained neutral.[16]

Because Scrope had not opposed the restoration he had some prospect of escape when the Restoration took place. He surrendered himself in obedience to the proclamation issued by King Charles II on 4 June 1660, and on 9 June the House of Commons voted that he should have the benefit of the act of indemnity on payment of a fine of one year's rent of his estates.[17] On 20 June he was accordingly discharged upon parole (ib. viii. 70). The House of Lords, however, ordered all the king's judges to be arrested, and excepted Scrope absolutely from pardon.[18] The commons on 13 August reiterated their vote in Scrope's favour, but, as the lords remained firm, they finally (28 August) yielded the point.[19] This was an inexcusable breach of faith, as Scroope had surrendered in reliance upon the king's proclamation.

At Scrope's trial (12 October 1660) Richard Browne, late major-general for the parliament, and now lord mayor elect of London, deposed that in a private conversation held since the Restoration Scrope had used words apparently justifying the king's execution, and had refused to pronounce it murder. Scrope, who defended himself with dignity and moderation, pleaded that he acted by the authority of parliament, and that he "never went to the work with a malicious heart". Sir Orlando Bridgeman, the presiding judge, treated Scroope with great civility. "Mr. Scrope", he said, "to give him his due, is not such a person as some of the rest"; but Browne's evidence, which had led to Scrope's abandonment by the Commons, sealed his fate, and he was condemned to death.[20]

On 12 October 1660, "Colonel Adrian Scroop was accused for sitting as one of the judges in the High Court of Justice, when the King was brought to answer as a prisoner at the bar, for signing one warrant for summoning that Court together, and another for the execution of the King. He denied nothing of this, but pleaded the authority of the Parliament in his justification; denying that he had been acted by any motive of malice as the indictment had untruly suggested; and asserting, that in what he had done relating to the King, he had followed the light of his reason and the dictates of his conscience. At this trial the principal witness was that Brown, who having been Major-General in the service of the Parliament, and mentioned...to be a mercenary spirit, was now brought to betray a private conversation; and to depose, that talking one day with Colonel Adrian Scroop in the Speaker's chamber, and telling him that the condition of the nation was sad since the murder of the King, the Colonel had answered, that men had different opinions touching that matter; and being desired by the said Brown to explain himself, he told him, he should not make him his confessor. Though this evidence be in appearance very insignificant; yet having influenced the House of Commons..'tis not to be admired if it took effect with a jury in an inferior court, who taking everything said against the person accused for substantial proof, made no scruple of bringing him in guilty of treason"[21]

Scrope was hanged, drawn and quartered at Charing Cross on 17 October 1660. An account of his behaviour in prison and at the gallows describes him as "a comely ancient gentleman", and dwells on his cheerfulness and courage.[22]

Adrian Scrope was born at Wormsley Hall in Oxfordshire and was baptised at Lewknor on 12 January 1601.[23] He was son of Robert Scrope of Wormsley and Margaret, daughter of Richard Cornwall of London. His family were a younger branch of the Scropes of Bolton.[23][24]

Scrope's eldest son, Edmund, was made fellow of All Souls' on 4 July 1649 by the parliamentary visitors, was subsequently keeper of the privy seal in Scotland, and died in 1658.[25] His brother Robert was about the same time made fellow of Lincoln College, and created by the visitors B.A. on 19 May 1649.[26] Scroope left 5 sons and 6 daughters, including Margaret, Anne and Elizabeth. Elizabeth married Jonathan Blagrave, related to Daniel Blagrave who is also a signatory to the Charles I Death Warrant. Elizabeth is buried in St. Mary's Collegiate Church, Youghal, Co. Cork, Ireland and her tombstone (defaced of any mention of "regicide") shows she lived 83 years.

Scrope's third son, and ultimate heir, was Thomas Scrope, whose son was John Scrope. John Scrope died without issue in 1752 so the Wormsley estate was inherited by the heirs of his sister Anne (d.1720), wife to Henry Fane of Brympton, essentially the third son, Henry Fane of Wormsley (1703-1777). The Fane family held onto Wormsley for circa 230 years, until the 1980s, when sold to a Getty.

Adrian's portrait was painted by (or after) Robert Walker and is displayed in the U.K. National Portrait Gallery.