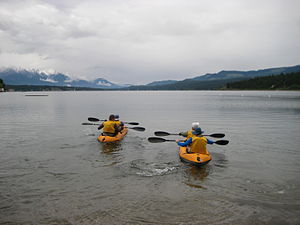 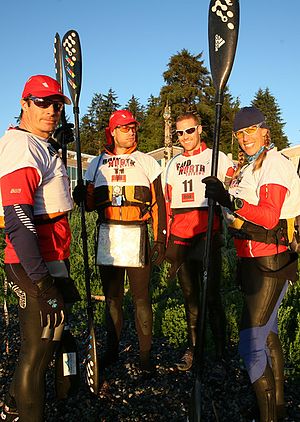 Adventure racing (also called expedition racing) is typically a multi-disciplinary team sport involving navigation over an unmarked wildnerness course with races extending anywhere from two hours up to two weeks in length. Some races offer solo competition as well. The principle disciplines in adventure racing include trekking, mountain biking, and paddling although races can incorporate a multitude of other disciplines including climbing, abseiling, horse riding, skiing and white water rafting.[1] Teams generally vary in gender mix and in size from two to five competitors, however the premier format is considered to be mixed gender teams of four racers. There is typically no suspension of the clock during races, irrespective of length; elapsed competition time runs concurrently with real time, and competitors must choose if or when to rest.

In 1980, the Alpine Ironman was held in New Zealand. Individual competitors ran, paddled and skied to a distant finish line. Later that year, the Alpine Ironman's creator, Robin Judkins launched the better-known Coast to Coast race, which involved most of the elements of modern adventure racing: trail running, cycling and paddling. Independently, a North American race, the Alaska Mountain Wilderness Classic debuted in 1982 and involved six days of unsupported wilderness racing (carry all food and equipment, no roads, no support) over a 150-mile course. It continues today, changing courses every 3 years.

In 1989, the modern era of adventure racing had clearly arrived with Gerald Fusil's launch of the Raid Gauloises in New Zealand. Inspired by the Paris-Dakar Rally, Fusil envisioned an expanded expedition-style race in which competitors would rely on their own strength and abilities to traverse great and challenging terrain. The race included all the modern elements of adventure racing, including mixed-gender teams competing in a multi-day 400+ mile race. Building on Fusil's concept, the inaugural Southern Traverse was held in 1991.

In the early-90's, Mark Burnett read an L.A. Times article about Raid Gauloises and was inspired to not only take the race to the USA, but to promote the race as a major televised sporting event. After purchasing the rights from Gerald Fusil, Burnett launched the first "Eco-Challenge" race in 1995. Burnett promoted his event with Emmy-award winning films (tapping the talent of Mike Sears to produce the films for the first two events). The Eco-Challenge was last held in 2002. With the Eco-Challenge also came the name "adventure race", a phrase coined by journalist and author Martin Dugard, to describe the class of races embodied by the Raid and Eco-Challenge.

In 2002, the first major expedition length race to be held exclusively in the United States was launched. Primal Quest has become the premier U.S. expedition race, being held each year since its launch. In 2004, the death of veteran racer Nigel Aylott over-shadowed the race, and raised debates about the nature of Primal Quest and adventure racing.

In 2004, professional geologist Stjepan Pavicic organized the first Patagonian Expedition Race at the bottom tip of the American continent, in the Chilean Tierra del Fuego. Truly demanding routes through rough terrain of often more than 600 km soon made it be known as “the last wild race”.

In 2010, the German Adventure Race Series where held for the first time in three different locations all over Germany. Since then the popularity of the sport in Germany has grown every year. More races and venues have joined the series and the number of competitors are still growing from year to year. Competitors can start in teams of two (male, female or mixed) within the categories Master (15-20 h), Challenger (8-10 h) or Beginner (4-6 h).

In 2012, Commander Forer of the Royal Navy organized the first Sea-land navigation discipline race The Solent Amphibious Challenge. The race demanded the competitors to split up between sailing, running, and cycling in parts of the race and rendezvous at the end and sail the yacht to the finish line. 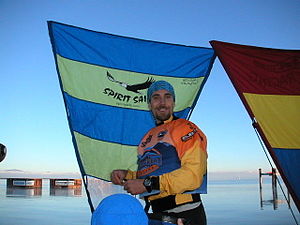 Setting up a kayak sail just before the start of Primal Quest 2003. 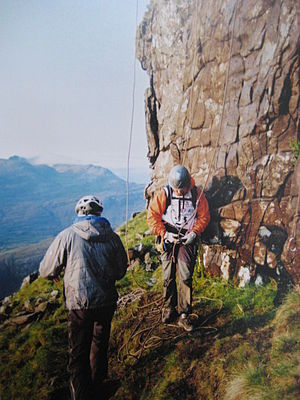 Preparing for the climbing section at an adventure race (Adrenaline Rush) in Scotland.

The majority of adventure races include trail running, mountain biking and a paddling event. Navigation and rope work are also featured in all but the shortest races, but this is only the beginning. Races often feature:

The rules of adventure racing vary by race. However, virtually all races include the rules of racing:

Typically races will feature an organizational meeting either the night before or the morning of the race. At this meeting the course will be revealed for the first time. For sprints, racers may follow a marked course. For longer races, racers may be given maps marked to show checkpoints ("CPs") or racers may be simply given a topographical map and coordinates (usually UTM coordinates) that indicate where the CPs will be found. Special rules, last minute changes and other information may also be provided at the meeting.

Racers are required to visit a series of checkpoints or passport controls (CPs), usually in a specific order.

Longer races feature multiple transition areas. Team gear is transported either by a support crew (provided by the team) or by the racing staff.

Virtually all adventure races feature mandatory gear that must be carried during part or all of the race. Races will often include mandatory pre-race gear checks by race personnel and harsh penalties or disqualification may result if a team lacks the requisite equipment.

In addition to pre-race gear checks, many race organizers also include on-course gear checks. This helps to ensure that teams that start with approved gear, compete with, and finish a race with that same gear.

Adventure races attract individuals of greatly divergent abilities. To make the sport more inclusive, many race directors will "short course" racers; allow racers who miss mandatory time cut-offs to continue racing on a reduced-length course. These racers will often earn an official finish time but be "unranked" and not eligible for prizes. Some races provide the option for teams to skip certain CPs but incur a time penalty (which often must be "served" during the race).

Most adventure races are team events, with expedition length races typically requiring a set number of teammates (usually four or five) and requiring the teams to be co-ed. Many racers find the team aspect of adventure racing to be among the most enticing and demanding aspects.

Teams typically elect a team captain and designate a team navigator. Teams have different views as to the functions of each of these positions, with some teams having very little structure, while others assigned specifics rights and responsibilities to each of these persons. For example, a team that stresses a democratic philosophy may limit the captain’s role to be the keeper of the racing passport and rules, and limit the navigator’s role to carrying the map and being primarily responsible for determining the team’s position at any given time. A more regimented team may give the captain ultimate responsibility for making all decisions regarding rest schedules, rule interpretations and the like, while the navigator has full responsibility for not only tracking the team’s location, but determining route choice as well.

In France, several Grandes écoles have races organized by students.