From Infogalactic: the planetary knowledge core
Jump to: navigation, search
For other uses, see Aeolus (disambiguation). 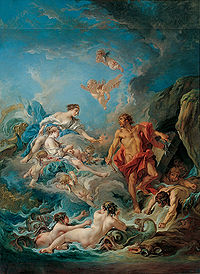 listen)), a name shared by three mythical characters, was the ruler of the winds in Greek mythology. These three personages are often difficult to tell apart, and even the ancient mythographers appear to have been perplexed about which Aeolus was which. Diodorus Siculus made an attempt to define each of these three (although it is clear that he also became muddled), and his opinion is followed here.[2] Briefly, the first Aeolus was a son of Hellen and eponymous founder of the Aeolian race; the second was a son of Poseidon, who led a colony to islands in the Tyrrhenian Sea; and the third Aeolus was a son of Hippotes who is mentioned in Odyssey book 10 as Keeper of the Winds who gives Odysseus a tightly closed bag full of the captured winds so he could sail easily home to Ithaca on the gentle West Wind. But instead his men thought it was filled with riches, so they opened it, unleashing a hurricane, which is why the journey was extended. All three men named Aeolus appear to be connected genealogically, although the precise relationship, especially regarding the second and third Aeolus, is often ambiguous.

This Aeolus was son of Hellen and the nymph Orseis, and a brother of Dorus, Xuthus and, in some sources, of Amphictyon (who is otherwise a brother of Hellen).[3] Described as the ruler of Aeolia (later called Thessaly) and held to be the founder of the Aeolic branch of the Greek nation, this Aeolus married Enarete, daughter of Deimachus (otherwise unknown). Aeolus and Enarete had many children, although the precise number and identities of these children vary from author to author in the ancient sources.[4] The great extent of country which this race occupied, and the desire of each part of it to trace its origin to some descendant of Aeolus, probably gave rise to the varying accounts about the number of his children. Some scholars contend that the most ancient and genuine story told of only four sons of Aeolus: Sisyphus, Athamas, Cretheus, and Salmoneus, as the representatives of the four main branches of the Aeolic race.[2] Other sons included Deioneus, Perieres, Cercaphas and perhaps Magnes (usually regarded as a brother of Macedon) and Aethlius. Another son is named Mimas, who provides a link to the third Aeolus in a genealogy that seems very contrived. Calyce, Peisidice, Perimede and Alcyone were counted among the daughters of Aeolus and Enarete.[5] This Aeolus also had an illegitimate daughter named Arne, begotten on Melanippe, daughter of the Centaur Chiron. This Arne became the mother of the second Aeolus, by the god Poseidon.

Aeolus by Alexandre Jacovleff shows Aeolus as an embodiment of Wind himself.

This Aeolus was a son of Poseidon by Arne, daughter of Aeolus. He had a twin brother named Boeotus. Arne confessed to her father that she was with child by the god Poseidon; her father, however, did not believe her, and handed her over to a man named Metapontus, King of Icaria. When Bœotus and Aeolus were born, they were raised by Metapontus; but their stepmother (Autolyte, wife of Metapontus) quarrelled with their mother Arne, prompting Bœotus and Aeolus to kill Autolyte and flee from Icaria. Bœotus (accompanied by Arne) went to southern Thessaly, and founded Boeotia; but Aeolus went to a group of islands in the Tyrrhenian Sea, which received from him the name of the Aeolian Islands; according to some accounts this Aeolus founded the town of Lipara. Although his home has been traditionally identified as one of the Aeolian Islands (there is little consensus as to which), near Sicily, an alternative location has been suggested at Gramvousa off the northwest coast of Crete. Aeolus had six sons and six daughters, whom in Homer he wed to one another and the family lived happily together. Later writers were shocked by the incest: in Hyginus,[6] the day Aeolus learned that one of his sons, Macareus, had committed incest with his sister Canace he expelled Macareus and threw the child born of this incestuous union to the dogs,[7] and sent his daughter a sword by which she was to kill herself.[8] Other late accounts claim that Macareus had a daughter named Amphissa, beloved by Apollo.

This Aeolus is most frequently conflated with Aeolus, the son of Poseidon, god of the sea. It is difficult to differentiate this Aeolus from the second Aeolus, as their identities seem to have been merged by many ancient writers. The father of this third Aeolus is given as Hippotes, son of Mimas, a son of the first Aeolus (son of Hellen). According to some accounts, Hippotes married the same Melanippe who was the mother of Arne.[9] This Aeolus lived on the floating island of Aeolia and was visited by Odysseus and his crew in the Odyssey. He gave hospitality for a month and provided for a west wind to carry them home. He also provided a gift of a bag containing all winds but the west, which Odysseus's crew members unwittingly opened just before they were to reach Ithaca. Unfortunately, they were blown back to Aeolia, where Aeolus refused to provide any further help,[10] because he believed that their short and unsuccessful voyage meant that the gods did not favour them. This Aeolus was perceived by post-Homeric authors as a god, rather than as a mortal and simple Keeper of the Winds (as in the Odyssey).

Like the previous, this Aeolus was said to have had twelve children - six sons and six daughters. According to Diodorus, he was father of six sons by Cyane, daughter of Liparus (the eponym of the island Lipara, whom Aeolus assisted in conquering lands above Surrentum, Italy). The sons' names were Agathyrnus, Astyochus, Androcles, Iocastus, Pheraemon, Xuthus, whereas the daughters are not mentioned at all. The sons were said to have become kings: Iocastus of the region in southern Italy as far as Rhegium; Pheraemon and Androcles of the part of Sicily between the Strait of Messina and Lilybaeum; Xuthus of Leontini; Agathyrnus of what was known as Agathyrnitis, having founded Agathyrnum; and Astyochus of Lipara. All were said to have been remembered as just and pious rulers.[11] Another list of Aeolus' children is found in scholia on the Odyssey.[12] The latter source gives the sons' names as Androcles, Chrysippus, Iocastus, Phalacrus, Pheraemon, Xuthus, and the daughters' as Aeole, Astycrateia, Dia, Hephaestia, Iphthe, Periboea; their mother in this account is Telepora or Telepatra, daughter of Laestrygon. 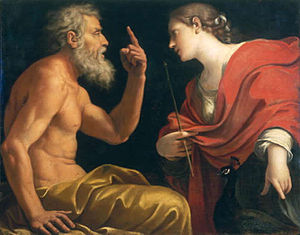 Aeolus and Juno by Lucio Massari

Parthenius of Nicaea[13] recorded a love affair between Odysseus and Aeolus' daughter Polymele; the latter was said to have ended up betrothed to her own brother Diores.

In the Aeneid by Virgil, Juno offers Aeolus the nymph Deiopea as a wife if he will release his winds upon the fleet of Aeneas.[14]