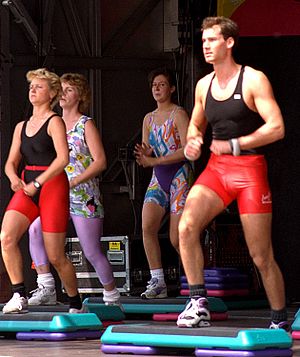 Aerobic exercise (also known as cardio) is physical exercise of low to high intensity that depends primarily on the aerobic energy-generating process.[1] Aerobic literally means "relating to, involving, or requiring free oxygen",[2] and refers to the use of oxygen to adequately meet energy demands during exercise via aerobic metabolism.[3] Generally, light-to-moderate intensity activities that are sufficiently supported by aerobic metabolism can be performed for extended periods of time.[1]

When practiced in this way, examples of cardiovascular/aerobic exercise are medium to long distance running/jogging, swimming, cycling, and walking, according to the first extensive research on aerobic exercise, conducted in the 1960s on over 5,000 U.S. Air Force personnel by Dr. Kenneth H. Cooper.[4][5] 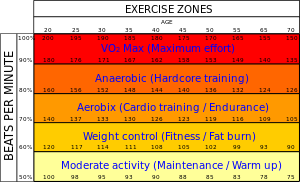 Aerobic exercise and fitness can be contrasted with anaerobic exercise, of which strength training and short-distance running are the most salient examples. The two types of exercise differ by the duration and intensity of muscular contractions involved, as well as by how energy is generated within the muscle.[6]

New research on the endocrine functions of contracting muscles has shown that both aerobic and anaerobic exercise promote the secretion of myokines, with attendant benefits including growth of new tissue, tissue repair, and various anti-inflammatory functions, which in turn reduce the risk of developing various inflammatory diseases. Myokine secretion in turn is dependent on the amount of muscle contracted, and the duration and intensity of contraction. As such, both types of exercise produce endocrine benefits.[7]

Initially during increased exertion, muscle glycogen is broken down to produce glucose, which undergoes glycolysis producing pyruvate which then reacts with oxygen (Krebs cycle, Chemiosmosis) to produce carbon dioxide and water and releases energy. If there is a shortage of oxygen (anaerobic exercise, explosive movements), carbohydrate is consumed more rapidly because the pyruvate ferments into lactate. If the intensity of the exercise exceeds the rate with which the cardiovascular system can supply muscles with oxygen, it results in buildup of lactate and quickly makes it impossible to continue the exercise. Unpleasant effects of lactate buildup initially include the burning sensation in the muscles, and may eventually include nausea and even vomiting if the exercise is continued without allowing lactate to clear from the bloodstream.

As glycogen levels in the muscle begin to fall, glucose is released into the bloodstream by the liver, and fat metabolism is increased so that it can fuel the aerobic pathways. Aerobic exercise may be fueled by glycogen reserves, fat reserves, or a combination of both, depending on the intensity. Prolonged moderate-level aerobic exercise at 65% VO2 max (the heart rate of 150 bpm for a 30-year-old human) results in the maximum contribution of fat to the total energy expenditure. At this level, fat may contribute 40% to 60% of total, depending on the duration of the exercise. Vigorous exercise above 75% VO2max (160 bpm) primarily burns glycogen.[8][9]

Major muscles in a rested, untrained human typically contain enough energy for about 2 hours of vigorous exercise. Exhaustion of glycogen is a major cause of what marathon runners call "hitting the wall". Training, lower intensity levels, and carbohydrate loading may allow postponement of the onset of exhaustion beyond 4 hours.[9]

Aerobic exercise comprises innumerable forms. In general, it is performed at a moderate level of intensity over a relatively long period of time. For example, running a long distance at a moderate pace is an aerobic exercise, but sprinting is not. Playing singles tennis, with near-continuous motion, is generally considered aerobic activity, while golf or two person team tennis, with brief bursts of activity punctuated by more frequent breaks, may not be predominantly aerobic. Some sports are thus inherently "aerobic", while other aerobic exercises, such as fartlek training or aerobic dance classes, are designed specifically to improve aerobic capacity and fitness. It is most common for aerobic exercises to involve the leg muscles, primarily or exclusively. There are some exceptions. For example, rowing to distances of 2,000 m or more is an aerobic sport that exercises several major muscle groups, including those of the legs, abdominals, chest, and arms. Common kettlebell exercises combine aerobic and anaerobic aspects.

As a result, aerobic exercise can reduce the risk of death due to cardiovascular problems. In addition, high-impact aerobic activities (such as jogging or using a skipping rope) can stimulate bone growth, as well as reduce the risk of osteoporosis for both men and women.

In addition to the health benefits of aerobic exercise, there are numerous performance benefits:

Some downfalls of aerobic exercise include:

Both the health benefits and the performance benefits, or "training effect", require a minimum duration and frequency of exercise. Most authorities suggest at least twenty minutes performed at least three times per week.[13]

Aerobic capacity describes the functional capacity of the cardiorespiratory system, (the heart, lungs and blood vessels). Aerobic capacity refers to the maximum amount of oxygen consumed by the body during intense exercises, in a given time frame.[14] It is a function both of cardiorespiratory performance and the maximum ability to remove and utilize oxygen from circulating blood. To measure maximal aerobic capacity, an exercise physiologist or physician will perform a VO2 max test, in which a subject will undergo progressively more strenuous exercise on a treadmill, from an easy walk through to exhaustion. The individual is typically connected to a respirometer to measure oxygen consumption, and the speed is increased incrementally over a fixed duration of time. The higher the measured cardiorespiratory endurance level, the more oxygen has been transported to and used by exercising muscles, and the higher the level of intensity at which the individual can exercise. More simply put, the higher the aerobic capacity, the higher the level of aerobic fitness. The Cooper and multi-stage fitness tests can also be used to assess functional aerobic capacity for particular jobs or activities.

The degree to which aerobic capacity can be improved by exercise varies very widely in the human population: while the average response to training is an approximately 17% increase in VO2max, in any population there are "high responders" who may as much as double their capacity, and "low responders" who will see little or no benefit from training.[15] Studies indicate that approximately 10% of otherwise healthy individuals cannot improve their aerobic capacity with exercise at all.[16] The degree of an individual's responsiveness is highly heritable, suggesting that this trait is genetically determined.[15]

Aerobic exercise has long been a popular approach to achieving weight loss and physical fitness, often taking a commercial form.