From Infogalactic: the planetary knowledge core
Jump to: navigation, search
Not to be confused with Air brake (aeronautics). 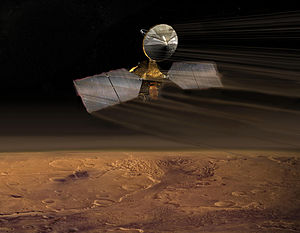 An artist's conception of aerobraking with the Mars Reconnaissance Orbiter

Aerobraking is a spaceflight maneuver that reduces the high point of an elliptical orbit (apoapsis) by flying the vehicle through the atmosphere at the low point of the orbit (periapsis). The resulting drag slows the spacecraft. Aerobraking is used when a spacecraft requires a low orbit after arriving at a body with an atmosphere, and it requires less fuel than does the direct use of a rocket engine.

When an interplanetary vehicle arrives at its destination, it must change its velocity to remain in the vicinity of that body. When a low, near-circular orbit around a body with substantial gravity (as is required for many scientific studies) is needed, the total required velocity changes can be on the order of several kilometers per second. If done by direct propulsion, the rocket equation dictates that a large fraction of the spacecraft mass must be fuel. This in turn means the spacecraft is limited to a relatively small science payload and/or the use of a very large and expensive launcher. Provided the target body has an atmosphere, aerobraking can be used to reduce fuel requirements. The use of a relatively small burn allows the spacecraft to be captured into a very elongated elliptic orbit. Aerobraking is then used to circularize the orbit. If the atmosphere is thick enough, a single pass through it can be sufficient to slow a spacecraft as needed. However, aerobraking is typically done with many orbital passes through a higher altitude, and therefore thinner region of the atmosphere. This is done to reduce the effect of frictional heating, and because unpredictable turbulence effects, atmospheric composition, and temperature make it difficult to accurately predict the decrease in speed that will result from any single pass. When aerobraking is done in this way, there is sufficient time after each pass to measure the change in velocity and make any necessary corrections for the next pass. Achieving the final orbit using this method takes a long time (e.g., over six months when arriving at Mars), and may require several hundred passes through the atmosphere of the planet or moon. After the last aerobraking pass, the spacecraft must be given more kinetic energy via rocket engines in order to raise the periapsis above the atmosphere.

The kinetic energy dissipated by aerobraking is converted to heat, meaning that a spacecraft using the technique needs to be capable of dissipating this heat. The spacecraft must also have sufficient surface area and structural strength to produce and survive the required drag, but the temperatures and pressures associated with aerobraking are not as severe as those of atmospheric reentry or aerocapture. Simulations of the Mars Reconnaissance Orbiter aerobraking use a force limit of 0.35 N per square meter with a spacecraft cross section of about 37 m², and a maximum expected temperature as 340 °F (170 °C).[1] The force density, of roughly 0.2 N (0.04 lbf) per square meter,[2] that was exerted on the Mars Observer, during aerobraking is comparable to the force of a 40 mph (60 km/h) wind on a human hand at sea level on Earth.[3]

Aerocapture is a related but more extreme method in which no initial orbit-injection burn is performed. Instead, the spacecraft plunges deeply into the atmosphere without an initial insertion burn, and emerges from this single pass in the atmosphere with an apoapsis near that of the desired orbit. Several small correction burns are then used to raise the periapsis and perform final adjustments.[4] This method was originally planned for the Mars Odyssey orbiter,[5] but the significant design impacts proved too costly.[4]

Another related technique is that of aerogravity assist, in which the spacecraft flies through the upper atmosphere and utilises aerodynamic lift instead of drag at the point of closest approach. If correctly oriented, this can increase the deflection angle above that of a pure gravity assist, resulting in a larger delta-v.[6]

Although the theory of aerobraking is well developed, utilising the technique is difficult because a very detailed knowledge of the character of the target planet's atmosphere is needed in order to plan the maneuver correctly. Currently, the deceleration is monitored during each maneuver and plans are modified accordingly. Since no spacecraft can yet aerobrake safely on its own, this requires constant attention from both human controllers and the Deep Space Network. This is particularly true near the end of the process, when the drag passes are relatively close together (only about 2 hours apart for Mars).[citation needed] NASA has used aerobraking four times to modify a spacecraft’s orbit to one with lower energy, reduced apoapsis altitude, and smaller orbit.[7]

On 19 March 1991, aerobraking was demonstrated by the Hiten spacecraft. This was the first aerobraking maneuver by a deep space probe.[8] Hiten (a.k.a. MUSES-A) was launched by the Institute of Space and Astronautical Science (ISAS) of Japan.[9] Hiten flew by the Earth at an altitude of 125.5 km over the Pacific at 11.0 km/s. Atmospheric drag lowered the velocity by 1.712 m/s and the apogee altitude by 8665 km.[10] Another aerobraking maneuver was conducted on 30 March.

In May 1993, aerobraking was used during the extended Venusian mission of the Magellan spacecraft. It was used to circularize the orbit of the spacecraft in order to increase the precision of the measurement of the gravity field. The entire gravity field was mapped from the circular orbit during a 243-day cycle of the extended mission. During the termination phase of the mission, a "windmill experiment" was performed: Atmospheric molecular pressure exerts a torque via the then windmill-sail-like oriented solar cell wings, the necessary counter-torque to keep the sonde from spinning is measured.[11]

In 1997, the Mars Global Surveyor (MGS) orbiter was the first spacecraft to use aerobraking as the main planned technique of orbit adjustment. The MGS used the data gathered from the Magellan mission to Venus to plan its aerobraking technique. The spacecraft used its solar panels as "wings" to control its passage through the tenuous upper atmosphere of Mars and lower the apoapsis of its orbit over the course of many months. Unfortunately, a structural failure shortly after launch severely damaged one of the MGS's solar panels and necessitated a higher aerobraking altitude (and hence one third the force) than originally planned, significantly extending the time required to attain the desired orbit. More recently, aerobraking was used by the Mars Odyssey and Mars Reconnaissance Orbiter spacecraft, in both cases without incident. In 2014, an aerobraking experiment was successfully performed near the end of the mission of the ESA probe Venus Express.[12][13]

In Robert A. Heinlein's 1948 novel Space Cadet, aerobraking is used to save fuel while slowing the spacecraft Aes Triplex for an unplanned extended mission and landing on Venus, during a transit from the Asteroid Belt to Earth.[14]

In the fourth episode of Stargate Universe, the Ancient ship Destiny suffers an almost complete loss of power and must use aerobraking to change course. The episode ends in a cliffhanger with Destiny headed directly toward a star.

The spacecraft Cosmonaut Alexey Leonov in Arthur C. Clarke's novel 2010: Odyssey Two and its film adaptation uses aerobraking in the upper layers of Jupiter's atmosphere to establish itself at the L1 Lagrangian point of the Jupiter – Io system.

In the 2004 TV series Space Odyssey: Voyage to the Planets the crew of the international spacecraft Pegasus perform an aerobraking manoeuvre in Jupiter's upper atmosphere to slow them down enough to enter Jovian orbit.

In the space simulation sandbox game Kerbal Space Program, this is a common method of reducing a craft's orbital speed. It is sometimes humorously referred to as "aerobreaking", because the high drag sometimes causes large crafts to split in several parts.

In the 2014 film Interstellar, astronaut pilot Cooper uses aerobraking to save fuel and slow the spacecraft Ranger upon exiting the wormhole to arrive in orbit above the first planet. 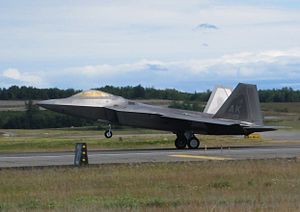 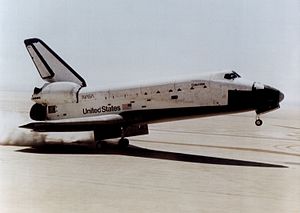 Aerodynamic braking is a method used in landing aircraft to assist the wheel brakes in stopping the plane. It is often used for short runway landings or when conditions are wet, icy or slippery. Aerodynamic braking is performed immediately after the rear wheels (main mounts) touch down, but before the nose wheel drops. The pilot begins to pull back on the stick, applying elevator pressure to hold the nose high. The nose-high attitude exposes more of the craft's surface-area to the flow of air, which produces greater drag, helping to slow the plane. The raised elevators also cause air to push down on the rear of the craft, forcing the rear wheels harder against the ground, which aids the wheel brakes by helping to prevent skidding. The pilot will usually continue to hold back on the stick even after the elevators lose their authority, and the nose wheel drops, to keep added pressure on the rear wheels.

Aerodynamic braking is a common braking technique during landing, which can also help to protect the wheel brakes and tyres from excess wear, or from locking up and sending the craft sliding out of control. It is often used by private pilots, commercial planes, fighter aircraft, and was used by the space shuttles during landings.[15][16][17]