From Infogalactic: the planetary knowledge core
Jump to: navigation, search
For the corporation, see The Aerospace Corporation. 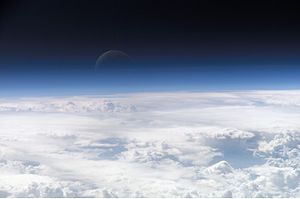 View of the Earth's atmosphere and the Moon beyond

Aerospace is the human effort in science, engineering and business to fly in the atmosphere of Earth (aeronautics) and surrounding space (astronautics). Aerospace organisations research, design, manufacture, operate, or maintain aircraft and/or spacecraft. Aerospace activity is very diverse, with a multitude of commercial, industrial and military applications.

Aerospace is not the same as airspace, which is the physical air space directly above a location on the ground. The beginning of space and the ending of the air is considered as 100 km above the ground according to the physical explanation that the air pressure is too low and recognized by authorities.[1]

In most industrial countries, the aerospace industry is a cooperation of public and private industries. For example, several countries have a civilian space program funded by the government through tax collection, such as National Aeronautics and Space Administration in the United States, European Space Agency in Europe, the Canadian Space Agency in Canada, Indian Space Research Organisation in India, Japanese Aeronautics Exploration Agency in Japan, RKA in Russia, China National Space Administration in China, SUPARCO in Pakistan, Iranian Space Agency in Iran, and Korea Aerospace Research Institute (KARI) in South Korea.

Along with these public space programs, many companies produce technical tools and components such as spaceships and satellites. Some known companies involved in space programs include Boeing, Airbus Group, Lockheed Martin, MacDonald Dettwiler and Northrop Grumman. These companies are also involved in other areas of aerospace such as the construction of aircraft.

Main articles: History of aviation and Timeline of space exploration

Modern aerospace began with George Cayley in 1799. Cayley proposed an aircraft with a "fixed wing and a horizontal and vertical tail," defining characteristics of the modern airplane.[2]

The 19th century saw the creation of the Aeronautical Society of Great Britain (1866), the American Rocketry Society, and the Institute of Aeronautical Sciences, all of which made aeronautics a more serious scientific discipline.[2] Airmen like Otto Lilienthal, who introduced cambered airfoils in 1891, used gliders to analyze aerodynamic forces.[2] The Wright brothers were interested in Lilienthal's work and read several of his publications.[2] They also found inspiration in Octave Chanute, an airman and the author of Progress in Flying Machines (1894).[2] It was the preliminary work of Cayley, Lilienthal, Chanute, and other early aerospace engineers that brought about the first powered sustained flight at Kitty Hawk, North Carolina on December 17, 1903, by the Wright brothers.

War and science fiction inspired great minds like Konstantin Tsiolkovsky and Wernher von Braun to achieve flight beyond the atmosphere.

The launch of Sputnik 1 in 1957 started the Space Age, and on July 20, 1969 Apollo 11 achieved the first manned moon landing.[2] In 1981, the Space Shuttle Columbia launched, the start of regular manned access to orbital space. A sustained human presence in orbital space started with "Mir" in 1986 and is continued by the "International Space Station".[2] Space commercialization and space tourism are more recent focuses in aerospace.

Aerospace manufacturing is a high-technology industry that produces "aircraft, guided missiles, space vehicles, aircraft engines, propulsion units, and related parts".[3] Most of the industry is geared toward governmental work. For each original equipment manufacturer (OEM), the US government has assigned a Commercial and Government Entity (CAGE) code. These codes help to identify each manufacturer, repair facilities, and other critical aftermarket vendors in the aerospace industry.

In the United States, the Department of Defense and the National Aeronautics and Space Administration (NASA) are the two largest consumers of aerospace technology and products. Others include the very large airline industry. The aerospace industry employed 472,000 wage and salary workers in 2006.[4] Most of those jobs were in Washington state and in California, with Missouri, New York and Texas also important. The leading aerospace manufacturers in the U.S. are Boeing, United Technologies Corporation, Northrop Grumman and Lockheed Martin. These manufacturers are facing an increasing labor shortage as skilled U.S. workers age and retire. Apprenticeship programs such as the Aerospace Joint Apprenticeship Council (AJAC) work in collaboration with Washington state aerospace employers and community colleges to train new manufacturing employees to keep the industry supplied.

In the European Union, aerospace companies such as EADS, BAE Systems, Thales, Dassault, Saab AB and Finmeccanica account for a large share of the global aerospace industry and research effort, with the European Space Agency as one of the largest consumers of aerospace technology and products.

In Russia, large aerospace companies like Oboronprom and the United Aircraft Building Corporation (encompassing Mikoyan, Sukhoi, Ilyushin, Tupolev, Yakovlev, and Irkut which includes Beriev) are among the major global players in this industry. The historic Soviet Union was also the home of a major aerospace industry.

The United Kingdom formerly attempted to maintain its own large aerospace industry, making its own airliners and warplanes, but it has largely turned its lot over to cooperative efforts with continental companies, and it has turned into a large import customer, too, from countries such as the United States. However, the UK has a very active aerospace sector, including the second largest defence contractor in the world, BAE Systems, supplying fully assembled aircraft, aircraft components, sub-assemblies and sub-systems to other manufacturers, both in Europe and all over the world.

Canada has formerly manufactured some of its own designs for jet warplanes, etc. (e.g. the CF-100 fighter), but for some decades, it has relied on imports from the United States to fill these needs. However Canada still manufactures some military planes although they are generally not combat or fighter planes.

France has continued to make its own warplanes for its air force and navy, and Sweden continues to make its own warplanes for the Swedish Air Force—especially in support of its position as a neutral country. (See Saab AB.) Other European countries either team up in making fighters (such as the Panavia Tornado and the Eurofighter Typhoon), or else to import them from the United States.

Pakistan has a developing aerospace engineering industry. The National Engineering and Scientific Commission, Khan Research Laboratories and Pakistan Aeronautical Complex are among the premier organizations involved in research and development in this sector. Pakistan has the capability of designing and manufacturing guided rockets, missiles and space vehicles. The city of Kamra is home to the Pakistan Aeronautical Complex which contains several factories. This facility is responsible for manufacturing the MFI-17, MFI-395, K-8 and JF-17 Thunder aircrafts. Pakistan also has the capability to design and manufacture both armed and unarmed unmanned aerial vehicles.

In the People's Republic of China, Beijing, Xi'an, Chengdu, Shanghai, Shenyang and Nanchang are major research and manufacture centers of the aerospace industry. China has developed an extensive capability to design, test and produce military aircraft, missiles and space vehicles. Despite the cancellation in 1983 of the experimental Shanghai Y-10, China is still developing its civil aerospace industry.

The aircraft parts industry was born out of the sale of second-hand or used aircraft parts from the aerospace manufacture sector. Within the United States there is a specific process that parts brokers or resellers must follow. This includes leveraging a certified repair station to overhaul and "tag" a part. This certification guarantees that a part was repaired or overhauled to meet OEM specifications. Once a part is overhauled its value is determined from the supply and demand of the aerospace market. When an airline has an aircraft on the ground, the part that the airline requires to get the plane back into service becomes invaluable. This can drive the market for specific parts. There are several online marketplaces that assist with the commodity selling of aircraft parts.

In the aerospaces & defense industry, a lot of consolidation has appeared over the last couple of decades. Between 1988 and 2011, worldwide more than 6,068 mergers & acquisitions with a total known value of 678 bil. USD have been announced.[5] The largest transactions have been: the acquisition of Goodrich Corporation by United Technologies Corporation for 16.2 bil. USD in 2011,[6] Allied Signal merged with Honeywell in a stock swap valued 15.6 bil. USD in 1999,[7] the merger of Boeing with McDonnell valued at 13.4 bil. USD in 1996,[8] Marconi Electronic Systems, a subsidiary of General Electric, was acquired by British Aerospace for 12.9 bil. USD in 1999[9] (now called: BAE Systems), and Raytheon acquired Hughes Aircraft for 9.5 bil. USD in 1997.

Functional safety relates to a part of the general safety of a system or a piece of equipment. It implies that the system or equipment can be operated properly and without causing any danger, risk, damage or injury.

Functional safety is crucial in the aerospace industry, which allows no compromises or negligence. In this respect, supervisory bodies, such as the European Aviation Safety Agency (EASA ),[10] regulate the aerospace market with strict certification standards. This is meant to reach and ensure the highest possible level of safety. The standards AS 9100 in America, EN 9100 on the European market or JISQ 9100 in Asia particularly address the aerospace and aviation industry. These are standards applying to the functional safety of aerospace vehicles. Some companies are therefore specialized in the certification, inspection verification and testing of the vehicles and spare parts to ensure and attest compliance with the appropriate regulations.

Spinoffs refer to any technology that is a direct result of coding or products created by NASA and redesigned for an alternate purpose.[11] These technological advancements are one of the primary results of the aerospace industry, with $5.2 billion worth of revenue generated by spinoff technology, including computers and cellular devices.[11] These spinoffs have applications in a variety of different fields including medicine, transportation, energy, consumer goods, public safety and more.[11] NASA publishes an annual report called “Spinoffs”, regarding many of the specific products and benefits to the aforementioned areas in an effort to highlight some of the ways funding is put to use.[12] For example, in the most recent edition of this publication, “Spinoffs 2015”, endoscopes are featured as one of the medical derivations of aerospace achievement.[11] This device enables more precise and subsequently cost-effective neurosurgery by reducing complications through a minimally invasive procedure that abbreviates hospitalization.[11]