Aetolia-Acarnania (Greek: Αιτωλοακαρνανία, Aitoloakarnanía) is one of the regional units of Greece. It is part of the geographic region of Central Greece and the administrative region of West Greece. A combination of the historical regions of Aetolia and Acarnania, it is the country's largest regional unit. Its capital is Missolonghi for historical reasons, with its biggest city and economic centre at Agrinio. The area is now connected with the Peloponnese peninsula via the Rio-Antirio Bridge. The surrounding regional units take in Arta in Epirus, a narrow length bordering Karditsa of Thessaly, Evrytania to the northeast, and Phocis to the east. 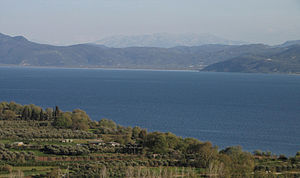 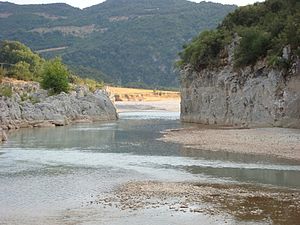 Mountains dominate the north, northeast, west and southeast, especially the Acarnanian Mountains. The longest and main river is the Acheloos, which ends as a delta in wetlands to the southwest on a rich fertile valley. The second longest is Evinos; others include the Ermitsa, the Inachos, and the Mornos (on the border with Phocis). The regional unit excludes the islands lying to its west, since they belong to the Kefalonia and Ithaca regional units. There is one reservoir and a lake in its central part. The many mountains of the area span the Panaitoliko toward the northeast and the Acarnanian Mountains, the Valtou and the Makrynoros mountains in the north, the Nafpaktia Mountains in the southeast, the Arakynthos and Kravara in the south.

Lakes include the Amvrakia, the Lysimachia, Ozeros, and Trichonida, and artificial lakes and reservoirs include Kastraki, Kremasta, the largest lake in Greece since its creation in 1970, and Stratos. Two lagoons are found in the southern part of the regional unit: the Messolongi and the Aitoliko.

Its climate tends toward hot summers and mild short winters in the low lying areas, with cool winters dominating in the mountain areas. At the highest elevations, summers are cool, and snow and cold weather dominate the winter months in the Panaitoliko.

During the Ottoman period, between the 16th century until the Greek War of Independence, the region was called Karleli and formed a province (sanjak) in the Rumelia Eyalet.

Aetolia and Acarnania became a prefecture and merged to form Aetolia-Acarnania after the Greek War of Independence in the late-1820s; the prefecture included Evrytania at the time, and it ranked second largest in Greece. Evrytania separated from the prefecture in 1948. In the 20th century, ferry services between Rio and the Peloponnese began. and in the 1950s and the 1960s ferry services began to incorporate vehicles. Following World War II and the Greek Civil War a number of buildings needed to be repaired.

A drawbridge linking the island of Lefkada began in the 1960s. The prefecture's first reservoir, the Acheloos Dam over the Acheloos was under construction in 1967 and completed in the early 1970s delivering water and hydro to western part of Greece, villages were relocated at the time. Two more dams were added, the Stratos Hydroelectric Dam in the 1980s and another in the late-1980s.

The following years, GR-5 bypassed Messolonghi and Agrinion and GR-38 became connected with paved road with Eurytania and Phthiotida. In the late-1980s, the by-pass of Naupaktos began construction but after paving the road, the signs did not appear and until 1998, it was left unopened. In 1999, the road was re-repaired and finally opened to traffic. In 2000, the construction of the Rio-Antirio or the Charilaos Trikoupis Bridge connecting the Peloponnese began construction and was opened to traffic in August 2004. The superhighway, the Ionia Odos (Ionian Motorway) which will run centrally bypassing communities began construction in 2001 at a part between Messolonghi and the curve, this section remains to be unpaved, the rest of the highway is in plan but the opening date is not yet set.

A railway formally served the places from Kryoneri and Agrinio and served with the ferry with Rio. In the 1980s, the service came to an end and was the next on the list of prefectures not connected with rail. It will remain on the list but not high-speed rail which will be in plan and connect with other cities including Athens, Patras and Ioannina, the track through this prefecture remains uncertain since there is no tunnel with the Peloponnese. 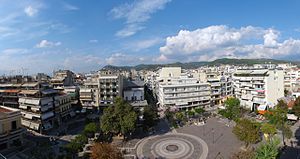 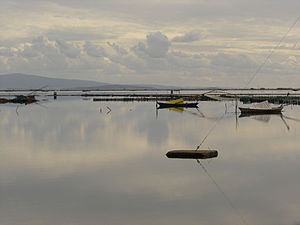 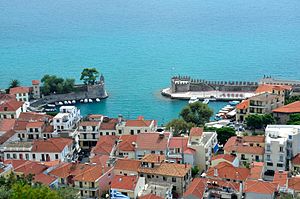 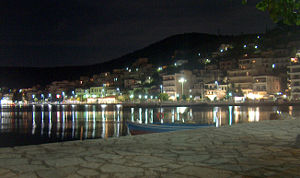 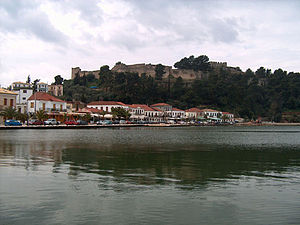 The regional unit Aetolia-Acarnania is subdivided into 7 municipalities. These are (number as in the map in the infobox):[2]