Affordability of housing in the United Kingdom

Housing tenure in the UK can be broadly divided into three categories: Owner-occupied; Private Rented Sector (PRS); and Social Rented Sector (SRS).[1] The affordability of housing in the UKvaries widely on a regional basis – house prices and rents will differ as a result of market factors such as the state of the local economy, transport links and the supply of housing. For owner-occupied property key determinants of affordability are: house prices; income; interest rates; and purchase costs. For rented property, PRS rents will largely be a reflection of house prices, while SRS rents are set by Local Authorities, Housing Associations or similar on the basis of what lower income groups can afford.

Land Registry figures for England and Wales show that house prices tripled in the 20 years between 1995 and 2015. Growth was almost continuous during the period, save for a two-year period of decline around 2008 as a result of the banking crisis.[2] 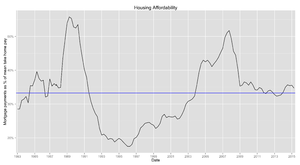 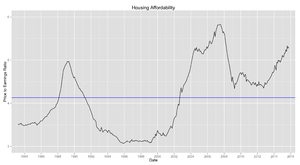 The gap between income and house prices has changed in the last 20 years such that even in the most affordable regions of England and Wales buyers have to spend six times their income, while in London the median house now costs 12 times the median London income. In comparison, in 1995 where a homebuyer earning the median salary for their region would have had to spend between 3.2 times and 4.4 times their salary on a house, depending on where they lived.

However, in 1995 the Bank Base Rate was 6%, but was cut to 0.5% in March 2009, where it has remained to date (November 2015).[4] The resultant cheap mortgages have partially ameliorated the affordability issues, but only in a small way. 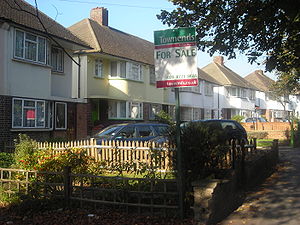 A house for sale.

Some economists and pressure groups such as Shelter argue that planning restrictions are a major factor behind the rise in prices as 70% of the cost of building new houses is the purchase of the land (up from 25% in the late 1950s).[5] An analysis by the LSE and the CPB Netherlands Bureau for Economic Policy Analysis found that house prices in England would have been 35% cheaper without regulatory constraints.[6] A report by the Adam Smith Institute found that by using 4% of London's green belt, one million homes could be built within 10 minutes walk of a railway station.[7]

The Economist has criticised green belt policy, saying that unless more houses are built through reforming planning laws and releasing green belt land, then housing space will need to be rationed out. It noted that if general inflation had risen as fast as housing prices had since 1971, a chicken would cost £51; and that Britain is "building less homes today than at any point since the 1920s".[8] According to the independent Institute of Economic Affairs, there is "overwhelming empirical evidence that that planning restrictions have a substantial impact on housing costs" and are the main reason why housing is two and a half times more expensive in 2011 than it was in 1975.[9]

However, the Campaign to Protect Rural England has stated that "Green Belt land is important for our wider environment, providing us with the trees and the undeveloped land which reduce the effect of the heat generated by big cities. Instead of reducing this green space, we should be using it to its best effect. We know from our research that three quarters (79%) of the population would like to see more trees planted and more food grown in the areas around towns and cities."[10]

Valuation of land and impact on house prices

Property companies state that land values follow house prices and that a developer assesses what new build house price is achievable in any particular location with reference to prices and sales rates in the second hand market and on nearby comparable new build sites. At a basic level (assuming no affordable housing, S106 or CIL), they then multiply that new build house price by the number of homes to be built on the land and to arrive at the gross development value (GDV) of the site. The underlying value of the land is then the GDV less the cost of development and less an appropriate allowance for profit.[11] 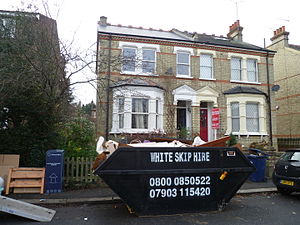 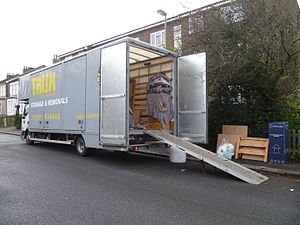 A removal van in London.

Stamp Duty Land Tax is payable by the buyer of a property as a percentage of the purchase price.

In 2011, Which? magazine found the national average estate agents fees to be 1.8%,[18] although fees vary widely.

There are approximately 250,000 homes in the UK which have been empty for more than six months (long-term empty homes). This is mainly due to financial reasons, such as the owner being unable to sell the house or raise enough money to renovate the property.[19] Empty Dwelling Management Orders (EMDOs) allow councils to take over the management of long-term empty properties but these are generally seen as a last resort and only 43 EDMOs were successful from 2006 to 2011. Government statistics show that long-term empty homes are generally concentrated in the North of England and in seaside towns, where property prices are generally lower, with the lowest percentage in London which had 20,795 long-term empty properties.[19]

The charity Empty Homes argued that empty homes were helping contribute to the housing crisis, saying in a report "The longer a property is empty the more our housing assets are being wasted. Also, the longer a property lies empty, the more likely it is to deteriorate; the more it is likely to cost to bring back into use; and the more it is likely to be seen as a blight by the neighbours."[20]

In the UK, particularly in London, there is a phenomenon known as 'buy-to-leave' where investors buy properties and leave them empty in order to benefit from rising house prices and the premium that some buyers will pay for houses which have not been lived in by anyone else. Nationally 'buy-to-leave' accounts for a small percentage of vacant properties according to the charity Empty Homes,[19] but Kensington and Chelsea council estimated in 2015 that as many as one in four houses in certain parts of their neighbourhood are affected, driving up prices while restricting the number of households that actually live there.[21] Overall long-term empty houses account for 2% of properties in Kensington and Chelsea.[22] In north London, Camden council managed to reduce the number of empty homes by charging a surcharge of 50% on council tax on homes left empty for more than two years.[22]