Afonso V[1] (Portuguese pronunciation: [ɐˈfõsu]) KG (15 January 1432 – 28 August 1481), called the African (Portuguese: o Africano), was King of Portugal and the Algarves. His sobriquet refers to his conquests in Northern Africa. 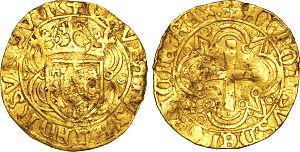 Afonso was born in Sintra, the eldest son of King Edward of Portugal by his wife, Eleanor of Aragon. Afonso V was only six years old when he succeeded his father in 1438.[2]

During his minority, Afonso V was placed under the regency of his mother[3] in accordance with a will of his late father. As both a foreigner and a woman, the queen was not a popular choice for regent. Opposition rose and without any important ally among the Portuguese aristocracy other than Afonso, Count of Barcelos, the illegitimate half brother of King Edward and count of Barcelos, the queen's position was untenable. In 1439, the Portuguese Cortes (assembly of the kingdom) decided to replace the queen with Peter, Duke of Coimbra (Dom Pedro),[3] the young king's oldest uncle.[2]

Peter's main policies were concerned with avoiding the development of great noble houses, kingdoms inside the kingdom, and concentrating power in the person of the king. The country prospered under his rule, but not peacefully, as his laws interfered with the ambition of powerful nobles. The count of Barcelos, a personal enemy of the Duke of Coimbra (despite being half-brothers) eventually became the king's favourite uncle and began a constant struggle for power. In 1442, the king made Afonso the first Duke of Braganza. With this title and its lands, he became the most powerful man in Portugal and one of the richest men in Europe. To secure his position as regent, Peter had Afonso marry his daughter, Isabella of Coimbra, in 1445.[2]

But on 9 June 1448, when the king came of age, Peter had to surrender his power to Afonso V. The years of conspiracy by the Duke of Braganza finally came to a head. On 15 September of the same year, Afonso V nullified all the laws and edicts approved under the regency. The situation became unstable and, in the following year, being led by what he afterwards discovered to be false representations, Afonso declared Peter a rebel and defeated his army in the Battle of Alfarrobeira, in which his uncle (and father-in-law) was killed.[3] After this battle and the loss of one of Portugal's most remarkable infantes, the Duke of Braganza became the de facto ruler of the country. 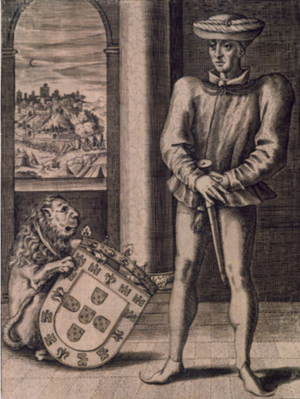 Contemporary portrait of Afonso V of Portugal, as depicted in the Itinerarium of Georg von Ehingen (printed 1600, Augsburg, but based on earlier image c.1470)

Afonso V then turned his attentions to North Africa. In the reign of his grandfather, John I, Ceuta had been conquered from the king of Morocco, and now the new king wanted to expand the conquests. The king's army conquered Alcácer Ceguer (1458), Tangiers (won and lost several times between 1460 and 1464) and Arzila (1471). These achievements granted the king the nickname of the African or Africano.[3] The king also supported the exploration of the Atlantic Ocean led by prince Henry the Navigator but, after Henry's death in 1460, he did nothing to continue this course of action. Administratively, Afonso V was a passive king. He chose not to pursue the revision of laws or development of commerce, preferring instead to preserve the legacy of his father Edward and grandfather John I.

In 1452, Pope Nicholas V issued the papal bull Dum Diversas, granting Afonso V the right to reduce "Saracens, pagans and any other unbelievers" to hereditary slavery. This was reaffirmed and extended in the Romanus Pontifex bull of 1455 (also by Nicholas V). These papal bulls came to be seen by some as a justification for the subsequent era of slave trade and European colonialism. 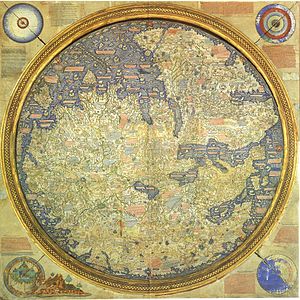 A copy of the Fra Mauro map was made under a commission by Afonso V in 1457. Finished on April 24, 1459, it was sent to Portugal with a letter to Prince Henry the Navigator, Afonso's uncle, encouraging further funding of exploration trips. Although the copy has been lost, the Andrea Bianco original is preserved at the Biblioteca Marciana (Venice).

When the campaigns in Africa were over, Afonso V found new grounds for battle in neighbouring Castile. In 1474, King Henry IV of Castile died without a male heir. From his two marriages, only a daughter, Joanna of Castile, had been born. But her paternity was questioned, and it was rumoured that the queen, Joan of Portugal, had an affair with a nobleman named Beltrán de La Cueva. The birth of princess Joanna in 1462, openly called La Beltraneja, caused the separation of her parents. She was never considered legitimate[citation needed] and, when the king was dying, no one took her as a serious contender for the crown. Her father's half-sister, the future Queen Isabella I of Castile, was due to inherit the crown, but Afonso V was persuaded to intervene in the succession. In 1475 he married his niece Joanna, whom he considered the legitimate heir to the crown. He proclaimed himself King of Castile and León and prepared to defend his wife's rights. After the indecisive[4] Battle of Toro in 1476 against King Ferdinand II of Aragon, the husband of Isabella I of Castile, he went to France to obtain the assistance of Louis XI, but finding himself deceived by the French monarch, he returned to Portugal in 1477. Disillusioned, he fell abdicated (for a time ) in favour of his son, John II. After this, he retired to a monastery in Sintra where he died in 1481.[3]