From Infogalactic: the planetary knowledge core
Jump to: navigation, search
This article is about the lakes in Africa. For other uses of the term "Great Lakes", see Great Lakes (disambiguation). 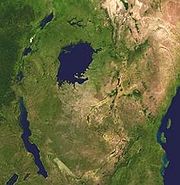 Satellite view of the African Great Lakes region and its coastline.

The African Great Lakes (Swahili: Maziwa Makuu) are a series of lakes constituting the part of the Rift Valley lakes in and around the East African Rift. They include Lake Victoria, the third largest fresh water lake in the world by area, and Lake Tanganyika, the world's second largest lake by volume and depth.[1]

The large rift lakes of Africa are the ancient home of great biodiversity; 10 percent of the world's fish species are found there. Lakes Victoria, Tanganyika, and Malawi hold a quarter of the planet's freshwater supply. 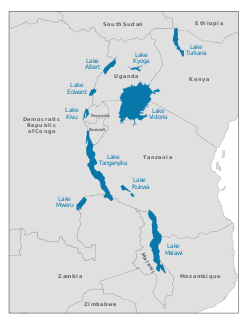 Some call only Lake Victoria, Lake Albert, and Lake Edward the Great Lakes, as they are the only three that empty into the White Nile. Lake Kyoga is part of the Great Lakes system. However, it is not itself considered a Great Lake, based on size alone. Lake Tanganyika and Lake Kivu both empty into the Congo River system, while Lake Malawi is drained by the Shire River into the Zambezi. Lake Turkana has no outlet.

The Bantu Swahili language is the most commonly spoken language in the African Great Lakes region.[3] It also serves as a national or official language of four nations in the region: Tanzania, Kenya, Uganda and the Democratic Republic of the Congo.

Due to the high population density of an estimated 107 million people, and the agricultural surplus in the region, the area became organized into a number of small states. The most powerful of these monarchies were Buganda, Bunyoro, Rwanda, and Burundi. Unusual for sub-Saharan Africa, the traditional borders were largely maintained by the colonial powers.

Being the long sought after source of the Nile, the region had long been of interest to Europeans. The first Europeans to arrive in the region in any numbers were missionaries who had limited success in converting the locals, but did open the region to later colonization. The increased contact with the rest of the world led to a series of devastating epidemics affecting both humans and livestock. While seen as a region with great potential after independence, the region has in recent decades been marred by civil war and conflict, from which only Tanzania has escaped. According to the UNHCR, Tanzania hosted the most Congolese refugees of the region. The worst affected areas have been left in great poverty.[4]

The highlands are relatively cool, with average temperatures of 17-19˚C and abundant rainfall. Major drainage basins include those of the Congo-Zaire, Nile, and Zambezi rivers, which drain into the Atlantic Ocean, Mediterranean Sea, and Indian Ocean, respectively.

Forests are dominant in the lowlands of the Congo-Zaire Basin, while grasslands and savannas are most common in the southern and eastern highlands. Temperatures in the lowlands average a hot mid-90s (Fahrenheit). Around Lake Turkana, the climate is hot and very dry. A short rainy season in October is followed by a longer one from April to May.

The Western Rift Valley lakes are freshwater and home to an extraordinary number of endemic species. Approximately 1,500 cichlid fish species live in the lakes, as well as other fish families. (Cichlids are perch-like fishes that occur only in tropical and subtropical freshwaters. The family contains more species than any other fish family.) The lakes are also important habitats for a number of amphibian species. Crocodiles are numerous. Mammals include elephants, gorillas and hippopotamus.

The Lake Turkana region is home to hundreds of species of birds endemic to Kenya. The flamingo wades in its shallows. The East African rift system also serves as a flyway for migrating birds, bringing in hundreds more. The birds are essentially supported by plankton masses in the lake, which also feed the fish there.

Vegetation ranges from rainforest to savanna grasses. In some lakes, rapidly growing invasive plants, like the surface-choking water hyacinth and shore-clogging papyrus, are problems. Water hyacinth have thus far affected only Lake Victoria.

Until 12 million years ago, the bountiful waters of the equatorial plateau either flowed west into the Congo River system or east to the Indian Ocean. Creation of the Great Rift Valley changed that. A rift is a weak place in Earth's crust due to the separation of two tectonic plates, often accompanied by a graben, or trough, in which lake water can collect. This rift began when East Africa, impelled by currents in the mantle, began separating from the rest of Africa, moving to the northeast. The basins that resulted from the geological uplifts filled with water that now flowed north.

Lake Victoria is not actually within the Rift Valley; it occupies a depression between the Eastern and Western Rifts, formed by the uplift of the rifts to either side.

Around two to three million years ago, Lake Turkana was larger and the area more fertile, making it a center for early hominids. Richard Leakey led numerous anthropological excavations in the area, which yielded many important discoveries of hominin remains. The two-million-year-old Skull 1470 was found in 1972. It was originally thought to be Homo habilis, but some anthropologists have assigned it to a new species, Homo rudolfensis, named after the lake (previously known as Lake Rudolf). In 1984, the Turkana Boy, a nearly complete skeleton of a Homo erectus boy was discovered. More recently, a 3,500,000-year-old skull was discovered there, named Kenyanthropus platyops, which means "The Flat-Faced Man of Kenya".

Fishing—primarily of tilapia species but also of Nile perch—provides the main livelihood. With four Great Lakes on its borders, Uganda ranks as one of the world's largest producers of freshwater fish. The climate and rich volcanic soils in the highlands also sustain intensely cultivated croplands.

The economies of the Great Lakes region states have different structures and are at various stages of development. The GDP real growth rate ranges from 5.1 percent in Burundi to 6.4 in DRC. GDP per capita fluctuates between $700 in DRC and Burundi and $1,900 in Uganda.