The African Methodist Episcopal Church, usually called the A.M.E. Church, is a predominantly African-American Methodist denomination based in the United States. It is the oldest independent Protestant denomination founded by black people in the world. It was founded by the Rt. Rev. Richard Allen in Philadelphia, Pennsylvania, in 1816 from several black Methodist congregations in the mid-Atlantic area that wanted independence from white Methodists. Allen was consecrated its first bishop in 1816. It began with 8 clergy and 5 churches, and by 1846 had grown to 176 clergy, 296 churches, and 17,375 members The 20,000 members in 1856 were located primarily in the North.[3][4] AME national membership (including probationers and preachers) jumped from 70,000 in 1866 to 207,000 in 1876.[5]

African
The AME Church was created and organized by people of African descent, Black people, descendants of enslaved Africans in North America as a response to being forcibly denied access to the Methodist church based on the color of their skin. The church was not founded in Africa, nor is it exclusively for people of African descent. It is open and welcoming to people of all ethinicities, origins, nationalities and colors, although its congregations are predominantly made of up Black Americans.[6]
Methodist
The church's roots are in the Methodist church. Members of St. George's Methodist Church left the congregation when faced with racial discrimination, but continued with the Methodist doctrine and the order of worship.[7]
Episcopal
The AME Church operates under an episcopal form of church government.[8] The denomination leaders are bishops of the church.

"God Our Father, Christ Our Redeemer, the Holy Spirit Our Comforter, Humankind Our Family"

Derived from Bishop Daniel Alexander Payne's original motto "God our Father, Christ our Redeemer, Man our Brother", which served as the AME Church motto until the 2008 General Conference, when the current motto was officially adopted. 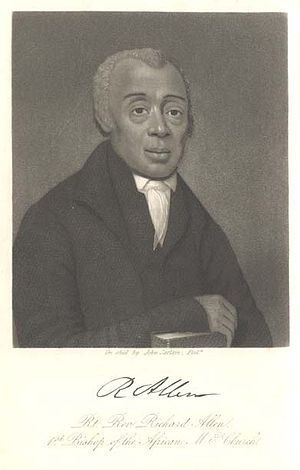 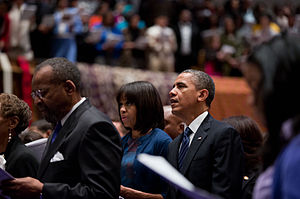 The AME Church grew out of the Free African Society (FAS), which Richard Allen, Absalom Jones, and other free blacks established in Philadelphia in 1787. They left St. George's Methodist Episcopal Church because of discrimination. Although Allen and Jones were both accepted as preachers, they were limited to black congregations. In addition, the blacks were made to sit in a separate gallery built in the church when their portion of the congregation increased. These former members of St. George's made plans to transform their mutual aid society into an African congregation. Although the group was originally non-denominational, eventually members wanted to affiliate with existing denominations.

The African Methodist Episcopal Church has a unique history as it is the first major religious denomination in the western world that developed because of sociological rather than theological differences. It was the first African-American denomination organized and incorporated in the United States. The church was born in protest against racial discrimination and slavery. This was in keeping with the Methodist Church's philosophy, whose founder John Wesley had once called the slave-trade "that execrable sum of all villainies." In the 19th century, the AME Church of Ohio collaborated with the Methodist Episcopal Church, a predominantly white denomination, in sponsoring the second independent historically black college (HBCU), Wilberforce University in Ohio. Among Wilberforce University's early founders was Salmon P. Chase, then-governor of Ohio and the future Secretary of Treasury under President Abraham Lincoln.

While the AME is doctrinally Methodist, clergy, scholars, and lay persons have written works that demonstrate the distinctive racial theology and praxis that have come to define this Wesleyan body. In an address to the 1893 World's Parliament of Religions, Bishop Benjamin W. Arnett reminded the audience of blacks' influence in the formation of Christianity. Bishop Benjamin T. Tanner wrote in 1895 in The Color of Solomon – What? that biblical scholars wrongly portrayed the son of David as a white man. In the post-civil rights era, theologians James Cone,[10] Cecil W. Cone, and Jacqueline Grant, who came from the AME tradition, criticized Euro-centric Christianity and African-American churches for their shortcomings in resolving the plight of those oppressed by racism, sexism, and economic disadvantage.[citation needed]

The AME motto, "God Our Father, Christ Our Redeemer, Holy Spirit Our Comforter, Humankind Our Family", reflects the basic beliefs of the African Methodist Episcopal Church.

The basic foundations of the beliefs of the church can be summarized in the Apostles' Creed, and The Twenty Five Articles of Religion, held in common with other Methodist Episcopal congregations. The church also observes the official bylaws of the AME Church. The "Doctrine and Discipline of the African Methodist Episcopal Church" is revised at every General Conference and published every four years.The AME church also follows the rule that a minister of the denomination must retire at age 75,[11] with bishops, more specifically, being required to retire upon the General Conference nearest their 75th birthday.[12] 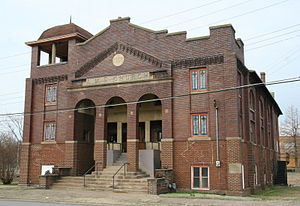 The African Methodist Episcopal Church has been one of the forerunners of education within the African-American community.

Senior colleges within the United States:

Junior colleges within the United States:

Theological seminaries within the United States:

The General Conference is the supreme body of the African Methodist Episcopal Church. It is composed of the Bishops, as ex officio presidents, according to the rank of election, and an equal number of ministerial and lay delegates, elected by each of the Annual Conferences and the lay Electoral Colleges of the Annual Conferences. Other ex officio members are: the General Officers, College Presidents, Deans of Theological Seminaries; Chaplains in the Regular Armed Forces of the U.S.A. The General Conference meets every four years, but may have extra sessions in certain emergencies.

The Council of Bishops is the Executive Branch of the Connectional Church. It has the general oversight of the Church during the interim between General Conferences. The Council of Bishops shall meet annually at such time and place as the majority of the Council shall determine and also at such other times as may be deemed necessary in the discharging its responsibility as the Executive Branch of the African Methodist Episcopal Church. The Council of Bishops shall hold at least two public sessions at each annual meeting. At the first, complaints and petitions against a Bishop shall be heard, at the second, the decisions of the Council shall be made public. All decisions shall be in writing.

The Board of Incorporators, also known as the General Board of Trustees, has the supervision, in trust, of all connectional property of the Church and is vested with authority to act in behalf of the Connectional Church wherever necessary.

The General Board is in many respects the administrative body and comprises various departmental Commissions made up of the respective Secretary-Treasurer, the General Secretary of the AME Church, the General Treasurer and the members of the various Commissions and one Bishop as presiding officer with the other Bishops associating.

The Judicial Council is the highest judicatory body of the African Methodist Episcopal Church. It is an appellate court, elected by the General Conference and is amenable to it.

The Connectional Health Commission serves, among other tasks, to help the denomination understand health as an integral part of the faith of the Christian Church, to seek to make our denomination a healing faith community, and to promote the health concerns of its members. One of the initiatives of the commission is the establishment of an interactive website that will allow not only health directors, but the AMEC membership at-large to access health information, complete reports, request assistance. This website serves as a resource for members of the AMEC, and will be the same for anyone who accesses the website. Additionally, as this will be an interactive site, it will allow health directors to enter a password protected chat room to discuss immediate needs and coordinate efforts for relief regionally, nationally and globally.

It is through this website that efforts to distribute information about resources and public health updates, and requests for services may be coordinated nationally. This will allow those who access the website to use one central location for all resource information needs.[14]

The AME Church is divided into 20 districts, spanning North America, the Caribbean, sub-Saharan Africa and parts of South America:

Bishops (past and present)