From Infogalactic: the planetary knowledge core
Jump to: navigation, search
For other uses, see Agate (disambiguation).

Agate /ˈæɡət/ is a cryptocrystalline variety of silica, chiefly chalcedony, characterised by its fineness of grain and brightness of color. Although agates may be found in various kinds of rock, they are classically associated with volcanic rocks and can be common in certain metamorphic rocks.[1]

The stone was given its name by Theophrastus, a Greek philosopher and naturalist, who discovered the stone along the shore line of the river Achates (Greek: Ἀχάτης) in present-day Sicily,[2] sometime between the 4th and 3rd centuries BC.[3] Colorful agates and other chalcedonies were obtained over 3,000 years ago from the Achates River, now called Dirillo.

Agate is one of the most common materials used in the art of hardstone carving, and has been recovered at a number of ancient sites, indicating its widespread use in the ancient world; for example, archaeological recovery at the Knossos site on Crete illustrates its role in Bronze Age Minoan culture.[4] 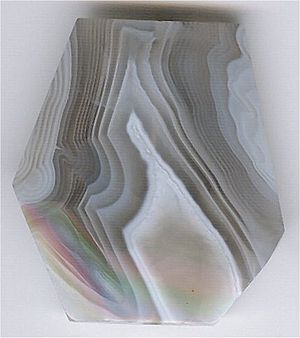 Most agates occur as nodules in volcanic rocks or ancient lavas, in former cavities produced by volatiles in the original molten mass, which were then filled, wholly or partially, by siliceous matter deposited in regular layers upon the walls. Agate has also been known to fill veins or cracks in volcanic or altered rock underlain by granitic intrusive masses. Such agates, when cut transversely, exhibit a succession of parallel lines, often of extreme tenuity, giving a banded appearance to the section. Such stones are known as banded agate, riband agate and striped agate.

In the formation of an ordinary agate, it is probable that waters containing silica in solution—derived, perhaps, from the decomposition of some of the silicates in the lava itself—percolated through the rock and deposited a siliceous coating on the interior of the vesicles. Variations in the character of the solution or in the conditions of deposition may cause a corresponding variation in the successive layers, so that bands of chalcedony often alternate with layers of crystalline quartz. Several vapour-vesicles may unite while the rock is still viscous, and thus form a large cavity which may become the home of an agate of exceptional size; thus a Brazilian geode lined with amethyst and weighing 35 tons was exhibited at the Düsseldorf Exhibition of 1902. Perhaps the most comprehensive review of agate chemistry is a recent text by Moxon cited below.

The first deposit on the wall of a cavity, forming the "skin" of the agate, is generally a dark greenish mineral substance, like celadonite, delessite or "green earth", which are rich in iron probably derived from the decomposition of the augite in the enclosing volcanic rock. This green silicate may give rise by alteration to a brown iron oxide (limonite), producing a rusty appearance on the outside of the agate-nodule. The outer surface of an agate, freed from its matrix, is often pitted and rough, apparently in consequence of the removal of the original coating. The first layer spread over the wall of the cavity has been called the "priming", and upon this base, zeolitic minerals may be deposited.

Many agates are hollow, since deposition has not proceeded far enough to fill the cavity, and in such cases the last deposit commonly consists of drusy quartz, sometimes amethystine, having the apices of the crystals directed towards the free space so as to form a crystal-lined cavity or geode.

When the matrix in which the agates are embedded disintegrates, they are set free. The agates are extremely resistant to weathering and remain as nodules in the soil, or are deposited as gravel in streams and along shorelines. 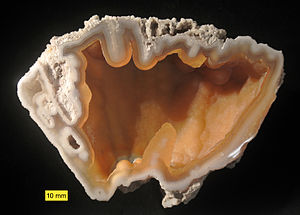 A Mexican agate, showing only a single eye, has received the name of cyclops agate. Included matter of a green, golden, red, black or other color or combinations embedded in the chalcedony and disposed in filaments and other forms suggestive of vegetable growth, gives rise to dendritic or moss agate. Dendritic agates have fern like patterns in them formed due to the presence of manganese and iron oxides. Other types of included matter deposited during agate-building include sagenitic growths (radial mineral crystals) and chunks of entrapped detritus (such as sand, ash, or mud). Occasionally agate fills a void left by decomposed vegetative material such as a tree limb or root and is called limb cast agate due to its appearance. Enhydro agate contains tiny inclusions of water, sometimes with air bubbles. 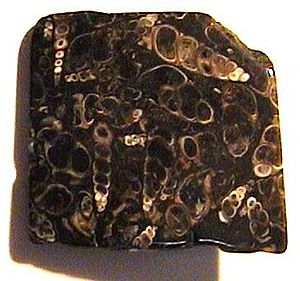 Greek agate is a name given to pale white to tan colored agate found in Sicily back to 400 BC. The Greeks used it for making jewelry and beads. Even though the stone had been around centuries and was known to both the Sumerians and the Egyptians, both who used the gem for decoration and for playing important parts in their religious ceremonies, any agate of this color from Sicily, once an ancient Greek colony, is called Greek agate.

Another type of agate is Brazilian agate, which is found as sizable geodes of layered nodules. These occur in brownish tones interlayered with white and gray. Quartz forms within these nodules, creating a striking specimen when cut opposite the layered growth axis. It is often dyed in various colors for ornamental purposes.

Certain stones, when examined in thin sections by transmitted light, show a diffraction spectrum due to the extreme delicacy of the successive bands, whence they are termed rainbow agates. Often agate coexists with layers or masses of opal, jasper or crystalline quartz due to ambient variations during the formation process.

Polyhedroid agate is agate which has grown in a flat-sided shape similar to a polyhedron.[5] When sliced, it often shows a characteristic layering of concentric polygons. Polyhedroid agate is thought to be found only in Paraíba State, Brazil. It has been suggested that growth is not crystallographically controlled but is due to the filling-in of spaces between pre-existing crystals which have since dissolved.[6]

Uses in industry and art 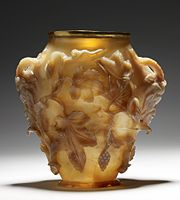 The "Rubens Vase" (Byzantine Empire). Carved in high relief from a single piece of agate, this extraordinary vase was most likely created in an imperial workshop for a Byzantine emperor.

Industrial uses of agate exploit its hardness, ability to retain a highly polished surface finish and resistance to chemical attack. It has traditionally been used to make knife-edge bearings for laboratory balances and precision pendulums, and sometimes to make mortars and pestles to crush and mix chemicals. It has also been used for centuries for leather burnishing tools.

The decorative arts use it to make ornaments such as pins, brooches or other types of jewelry, paper knives, inkstands, marbles and seals. Agate is also still used today for decorative displays, cabochons, beads, carvings and Intarsia art as well as face-polished and tumble-polished specimens of varying size and origin. Idar-Oberstein was one of the centers which made use of agate on an industrial scale. Where in the beginning locally found agates were used to make all types of objects for the European market, this became a globalized business around the turn of the 20th century: Idar-Oberstein imported large quantities of agate from Brazil, as ship's ballast. Making use of a variety of proprietary chemical processes, they produced colored beads that were sold around the globe.[7] Agates have long been used in arts and crafts. The sanctuary of a Presbyterian church in Yachats, Oregon, has six windows with panes made of agates collected from the local beaches.[8]

Respiratory diseases such as silicosis and higher incidence of tuberculosis among workers involved in the agate industry has been reported from India and China.[9][10][11]