Saint Agatha of Sicily (231 AD – 251 AD) is a Christian saint and virgin martyress. Her memorial is on 5 February. Agatha[4] was born at Catania or Palermo, Sicily, and she was martyred in approximately 251. She is one of seven women, who, along with the Blessed Virgin Mary, are commemorated by name in the Canon of the Mass.[5]

She is the patron saint of Catania, Molise, Malta, San Marino and Zamarramala, a municipality of the Province of Segovia in Spain. She is also the patron saint of breast cancer patients, martyrs, wet nurses, bell-founders, bakers, fire, earthquakes, and eruptions of Mount Etna.

Agatha is buried at the Badia di Sant'Agata, Catania.[6] She is listed in the late 6th-century Martyrologium Hieronymianum associated with Jerome,[7] and the Synaxarion, the calendar of the church of Carthage, ca. 530.[8] Agatha also appears in one of the carmina of Venantius Fortunatus.[9]

Two early churches were dedicated to her in Rome,[10] notably the Church of Sant'Agata dei Goti in Via Mazzarino, a titular church with apse mosaics of ca. 460 and traces of a fresco cycle,[11] overpainted by Gismondo Cerrini in 1630. In the 6th century CE, the church was adapted to Arianism, hence its name "Saint Agatha of Goths", and later reconsecrated by Gregory the Great, who confirmed her traditional sainthood.

Agatha is also depicted in the mosaics of Sant'Apollinare Nuovo in Ravenna, where she appears, richly dressed, in the procession of female martyrs along the north wall. Her image forms an initial I in the Sacramentary of Gellone, which dates from the end of the 8th century.

One of the most highly venerated virgin martyrs of Christian antiquity, Agatha was put to death during the persecution of Decius (250–253) in Catania, Sicily, for her steadfast profession of faith.[7]

Her written legend[12] comprises "straightforward accounts of interrogation, torture, resistance, and triumph which constitute some of the earliest hagiographic literature",[13] and are reflected in later recensions, the earliest surviving one being an illustrated late 10th-century passio bound into a composite volume[14] in the Bibliothèque nationale de France, originating probably in Autun, Burgundy; in its margin illustrations Magdalena Carrasco detected Carolingian or Late Antique iconographic traditions.[15]

Although the martyrdom of Saint Agatha is authenticated, and her veneration as a saint had spread beyond her native place even in antiquity, there is no reliable information concerning the details of her death.[7]

According to Jacobus de Voragine, Legenda Aurea of ca. 1288,[16] having dedicated her virginity to God,[17] fifteen-year-old Agatha, from a rich and noble family, rejected the amorous advances of the low-born Roman prefect Quintianus, who then persecuted her for her Christian faith.[18] He sent Agatha to Aphrodisia, the keeper of a brothel. 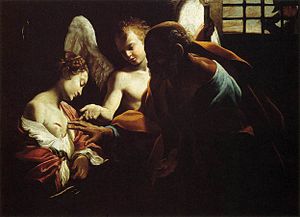 The madam finding her intractable, Quintianus sends for her, argues, threatens, and finally has her put in prison. Amongst the tortures she underwent was the cutting off of her breasts with pincers. After further dramatic confrontations with Quintianus, represented in a sequence of dialogues in her passio that document her fortitude and steadfast devotion. Saint Agatha was then sentenced to be burnt at the stake, but an earthquake saved her from that fate; instead, she was sent to prison where St. Peter the Apostle appeared to her and healed her wounds.[19] Saint Agatha died in prison, according to the Legenda Aurea in "the year of our Lord two hundred and fifty-three in the time of Decius, the emperor of Rome."

Osbern Bokenham, A Legend of Holy Women, written in the 1440s, offers some further detail.[20] 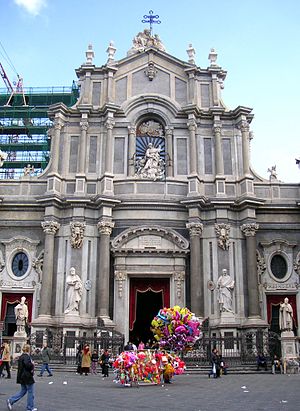 According to Maltese tradition, during the persecution of Roman Emperor Decius (AD 249–251), Agatha, together with some of her friends, fled from Sicily, and took refuge in Malta. Some historians believe that her stay on the island was rather short, and she spent her days in a rock hewn crypt at Rabat, praying and teaching the Christian Faith to children. After some time, Agatha returned to Sicily, where she faced martyrdom. Agatha was arrested and brought before Quintanus, praetor of Catania, who condemned her to torture and imprisonment. The crypt of St. Agatha is an underground basilica, which from early ages was venerated by the Maltese. At the time of St. Agatha's stay, the crypt was a small natural cave which later on, during the 4th or 5th century, was enlarged and embellished.[21] 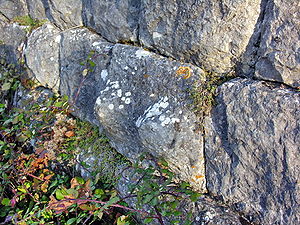 She is the patron saint of Catania, Sorihuela del Guadalimar (Spain), Molise, San Marino, Malta and Kalsa, a historical quarter of Palermo.

Saint Agatha is a patron saint of Malta, where in 1551 her intercession through a reported apparition to a Benedictine nun is said to have saved Malta from Turkish invasion.[21]

Agatha is the patron saint of bell-founders because of the shape of her severed breasts,[18] and also of bakers, whose loaves were blessed at her feast day. More recently, she has been venerated as patron saint of breast cancer patients.

She is claimed as the patroness of Palermo. The year after her death, the stilling of an eruption of Mt. Etna was attributed to her intercession. As a result, apparently, people continued to ask her prayers for protection against fire.[22]

Saint Agatha is often depicted iconographically carrying her excised breasts on a platter, as by Bernardino Luini's Saint Agatha (1510–15) in the Galleria Borghese, Rome, in which Agatha contemplates the breasts on a standing salver held in her hand. 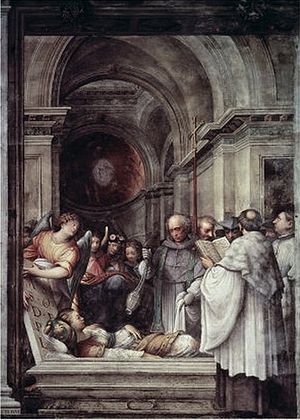 Basques have a tradition of gathering on Saint Agatha's Eve (Basque: Santa Ageda bezpera) and going round the village. Homeowners can choose to hear a song about her life, accompanied by the beats of their walking sticks on the floor or a prayer for the household's deceased. After that, the homeowner donates food to the chorus.[23] This song has varying lyrics according to the local tradition and the Basque language. An exceptional case was that of 1937, during the Spanish Civil War, when a version appeared that in the Spanish language praised the Soviet ship Komsomol, which had sunk while carrying Soviet weapons to the Second Spanish Republic.

An annual festival to commemorate the life of Saint Agatha takes place in Catania, Sicily, from February 3 to 5. The festival culminates in a great all-night procession through the city for which hundreds of thousands of the city's residents turn out.[24]

St. Agatha's Tower is a former Knight's stronghold located in the north west of Malta. The seventeenth-century tower served as a military base during both World Wars and was used as a radar station by the Maltese army.[21]

Agatha is a featured figure on Judy Chicago's installation piece The Dinner Party, being represented as one of the 999 names on the Heritage Floor.[25]