Agent-based computing is the design of the model and agents, while the computer simulation is the part of the simulation of the agents in the model and the outcomes. The social science is a mixture of sciences and social part of the model. It is where social phenomena are developed and theorized. The main purpose of ABSS is to provide models and tools for agent-based simulation of social phenomena. With ABSS, one can explore different outcomes of phenomena where it may not be possible to view the outcome in real life. It can provide us valuable information on society and the outcomes of social events or phenomena.

Principles of multiagent based social simulation

A multi-agent system is a system created from multiple autonomous elements interacting and reacting on each other. These are called Agents. See Agent-based model. In simulation, Agents can be used to simulate many different elements. These could be society, organism, machine, person or any other active element, which does, or does not exist in real world. In a multi-agent system, an agent is represented by a software program or algorithm. This program contains in itself all rules of agents behavior. The purpose of models could be simulation of social phenomena like transportation, market failures, cooperation and escalation and spreading of conflicts. Agents in concept of ABSS In Agent based social systems, agents Emergence in context of social simulation In agent based simulations we can observe phenomenon, when model based on simple rules results in very complex dynamics. This phenomenon is related to emergence and one of recent topic of social science is concept of emerging behavior in social science (Kontopoulos, 1993; Archer, 1995; Sawyer, 2001).

The first widely known multi-agent generative social model was developed in 1996 by Joshua M. Epstein and Robert Axtell.[1] The purpose of this model was simulation and research of social phenomenons like seasonal migration, environmental pollution, procreation, combat, disease spreading and cultural features. Their model is based on the work of economist Thomas Schelling, presented in paper "Models of Segregation" Thomas Schelling. This model represented the first generation of computer-based social simulations. Epstein and Axtell’s model was implemented using concepts from the "Game of Life" developed by John Horton Conway.

There are three main objects of scientific implementation of ABSS (Gilbert, Trotzsch; 2005)

As a way to understand basic aspects of social phenomenon.

Like aspects involving its diffusion, dynamics or results. Such a basic models should be based on simple rules, so way in which resulting behavior emerges from system could be easily observable.

These models are implemented to prediction real life events and phenomenons. Examples of use could be transportation (prediction of traffic in future to find places where could traffic jams occur), prediction of future unemployment rates etc. Problem of models made to accurately predict such an events is increasing complexity of model with number of dynamically changing parameters.

Research, testing and formulation of hypothesis

Unlike other two main objects, which have use outside Social sciences, latter one is used mainly on the field of social science. Agent-based social simulations are often used during research of new hypothesis. Simulation could be useful when there is no other way to observe agents during their actions. For example, during creation of new language, which is long-term process. Another benefit of simulation lies in fact, that to be able to prove theory in simulation, it has to be represented in formal and logical form. This leads to more coherent formulation of theory. 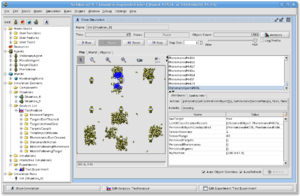