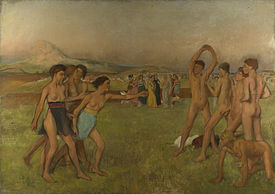 An artistic representation of Spartan exercise, part of the agoge for young Spartan males. Females, however, were encouraged to exercise with the males.

The agōgē (Greek: ἀγωγή in Attic Greek, or ἀγωγά, agōgá in Doric Greek) was the rigorous education and training regimen mandated for all male Spartan citizens, except for the firstborn son in the ruling houses, Eurypontid and Agiad. The training involved learning stealth, cultivating loyalty to the Spartan group, military training (e.g. pain tolerance), hunting, dancing, singing and social (communicating) preparation.[1] The word "agoge" meant in ancient Greek, rearing, but in this context generally meant leading, guidance or training.[2]

According to folklore, agoge was introduced by the semi-mythical Spartan law-giver Lycurgus but its origins are thought to be between the 7th and 6th centuries BC[3][4] when the state trained male citizens from the ages of seven to twenty-one.[1][5]

The aim of the system was to produce physically and morally strong males to serve in the Spartan army. It encouraged conformity and the importance of the Spartan state over one's personal interest and generated the future elites of Sparta.[1] The men would become the "walls of Sparta" because Sparta was the only Greek city with no defensive walls after they had been demolished at the order of Lycurgus. Discipline was strict and the males were encouraged to fight amongst themselves to determine the strongest member of the group.

The agoge was prestigious throughout the Greek world, and many aristocratic families from other cities vied to send their sons to Sparta to participate in the agoge for varying periods of time. The Spartans were very selective in which young men they would permit to enroll. Such honors were usually awarded to the próxenoi of Sparta in other cities and to a few other families of supreme ancestry and importance.

When a boy was born, he was washed with wine in the belief that this would make him strong. Every infant was then examined by members of the Gerousia (a council of leading elder Spartans) from the child's tribe to see whether he was fit and healthy enough to be allowed to live. In the event that the baby did not pass the test, he was thrown off of a cliff at a place called the apothetae near Mt. Taygetus for several days in a test to die of exposure or survive the ordeal. At the age of seven, the male child was enrolled in the agoge under the authority of the paidonómos (παιδονόμος), or "boy-herder", a magistrate charged with supervising education. This began the first of the three stages of the agoge: the paídes (about ages 7–17), the paidískoi (ages 17–19), and the hēbōntes (ages 20–29). Some classical sources indicate that there were further subdivisions by year within these classes.[1]

The boys lived in groups (agélai, "herds") under an older man. They were encouraged to give their loyalty to their communal mess hall known as the Syssitia, rather than to their families. Beginning at the age of 12 boys would be given only one item of clothing per year — a red cloak known as a Phoinikis (a toponym reflecting the Phoenician origin of the Tyrian purple dye used or imitated in the cloak). They also created beds out of reeds pulled by hand, with no knife, from the Eurotas River. Boys were intentionally underfed to encourage them to master the skills necessary to become successful at stealing their food. This was also meant to produce tall well-built soldiers rather than fat short ones. This let the boys become accustomed to hunger so that during a campaign, hunger would not be a problem. They would be severely punished, however, if they were caught stealing. Only the heirs apparent of the two Spartan royal households (the Agiads and Eurypontids) were exempt from the process.

At around age 12 the boys would enter into an institutionalized relationship with a young adult male Spartan. Plutarch described this form of Spartan pederasty wherein somewhat older warriors would engage promising youths in a long-lasting relationship with a pedagogic motive. The boy was expected to request the relationship, which was seen as a method to pass on knowledge and maintain loyalty on the battlefield. At the stage of paidiskoi, around the age of 18, the students became reserve members of the Spartan army. Also, some youths were allowed to become part of the Crypteia, a type of 'Secret Police', where the members were instructed to spy on the Helot population and even kill Helot slaves who were out at night or spoke seditiously, to help keep the population submissive. The state supported this by formally declaring war on the Helots every autumn, so that killing a Helot was not regarded as a crime, but a valuable deed for the good of the state.[1]

At the stage of hēbōntes, roughly age 20, the students became fully part of the syssitia and Spartan army, although they continued to live in barracks and to compete for a place among the Spartan hippeis, the royal guard of honor.[1] At the age of 20, students were voted into one of the public messes. The voting was done by Spartan peers who were members of the mess, and must be unanimous. Rejected candidates could try to gain entry to a different mess for up to ten years. If a fellow failed to gain entry into a mess by age 30, he would not gain Spartan citizenship. At the age of 30, men were permitted to marry and to become full citizens of Sparta who could vote and hold office.

Education in the agoge served as a great equalizer in Sparta. Men were meant to compete in athletics and in battle. Helots and common men likely only developed their reading and writing skills as needed to make votive offerings and read important inscriptions. On the other hand, Spartans who became kings, diplomats or generals would also improve the rhetoric, reading, and writing skills necessary for their positions. How the majority of the population of citizen male Spartans became literate, or whether they were literate at all, is not well known. However, there is reference made in Plutarch's "Sayings of Spartan Women" to correspondence kept between mother and sons on campaign, which would suggest some degree of literacy.

Girls also had a form of state education involving dance, gymnastics and other sports; together with other subjects such as music and poetry, including writing and war education. Traits such as grace and culture were frowned upon in favor of physical tempering and moral rectitude. The girls were also encouraged to help the males by humiliating them in public and criticizing their exercising. Just as Spartan males were raised to become warriors, the females of Sparta were trained for their primary task: giving birth to warriors. Encouraged to be strong and healthy, girls participated in athletic competitions, running footraces in off-the-shoulder chitons.

Spartan women wore the old-fashioned peplos (πέπλος), open at the side, leading to banter at their expense among the other Greeks who dubbed them phainomērídes (φαινομηρίδες) the "thigh-showers." At religious ceremonies, on holidays and during physical exercise girls and women were nude.[6]

Any male who did not successfully pass through the agoge would be denied Spartan citizenship. At various times this selection process came to be seen as detrimental to Spartan society particularly when the number of free male Spartan citizens dwindled. The practice waned in the 3rd century BC but was successfully reinvigorated some time in the 220s BC by Cleomenes III. It was abolished, however, less than forty years later by Philopoemen in 188 BC. The agoge was reinstated in the year 146 BC after the Romans defeated the Achaeans in the Achaean War.

The Roman agoge was limited to males between the ages of 14 to 19 and was essentially ephebic in nature and organized by phyles (citizen tribes). The instruction consisted of athletics, singing, dancing, military and probably some academic training. The students were supervised by officials called bideioi[citation needed] ("overseers") and a patronomos ("guardian of law"). During the Flavian dynasty a team-based structure was introduced to the Roman agoge which put groups of students under the command of a team leader or boagos (βοαγός). Sponsorship was available to some poor students who could not afford the training.[1]