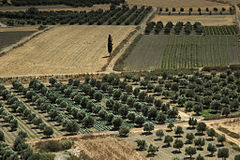 Agriculture in Greece is based on small-sized, family-owned dispersed units, while the extent of cooperative organization stays at low comparative levels, against all efforts that have been taken in the last 30 years, mainly under European Union supervision. Greek agriculture employs 528,000 farmers, 12% of the total labor force. It only produces 3.6% of the national GDP (about $16 billion annually). A large number of the country's immigrants are employed in the agricultural sector of the economy, as well as construction and public works.

Currently, Greek agriculture is heavily subsidized by the Common Agricultural Policy (CAP), with controversial results. Certain deductions of subsidies are planned within the next decade.

Greece produces a wide variety of crops and livestock products. Fisheries are also playing an important role while forestry plays a secondary role.

In the 19th century, Greek agriculture was very basic. Implements found in western Europe had not yet appeared. The following description was reported by William Henry Moffett, American Consul in Athens and was published in the American periodical Garden and Forest (Volume 2, Issue 95, 18 December 1889, p. 612: published by Garden and Forest Publishing Co., Tribune Building, New York, N.Y.):

William H. Moffett, United States Consul at Athens, reports the impossibility of making any official statement as to the agriculture of Greece, because "agriculture is here in the most undeveloped condition. Even in the immediate neighborhood of Athens it is common to find the wooden plow and the rude mattock which were in use 2,000 years ago. Fields are plowed up or scratched over, and crops replanted season after season, until the exhausted soil will bear no more. Fertilizers are not used to any appreciable extent, and the farm implements are of the very rudest description. Irrigation is in use in some districts, and, as far as I can ascertain, the methods in use can be readily learned by a study of the practices of the ancient Egyptians. Greece has olives and grapes in abundance, and of quality not excelled; but Greek olive oil and Greek wine will not bear transportation."

Greek agricultural production was vastly expanded in the 20th century, as per the information given elsewhere on this page. In particular grain production (wheat, barley, etc.) has been significantly increased using more modern farming methods.

The main varieties of domestic wheat produced in Greece during 2002 were FLAVIO, VAVAROS and MEXA. [2]