Agrinio (Greek: Αγρίνιο, Latin: Agrinium) is the largest city and municipality of the Aetolia-Acarnania regional unit of Greece, with 106,053 inhabitants. It is the economical center of Aetolia-Acarnania, although its capital is the town of Mesolonghi. The settlement dates back to ancient times. Ancient Agrinion was 3 kilometres (2 miles) northeast of the present city; some walls and foundations of which have been excavated. In medieval times and until 1836, the city was known as Vrachori (Βραχώρι).

The majority of the local population was occupied for an important period of time in the tobacco industry, from the last decades of 19th till the end of the 20th century. Big tobacco companies were founded in the city, including the famous Papastratos, alongside Panagopoulos and Papapetrou. Agrinion is also agriculturally known for its production of Agrinion olives. 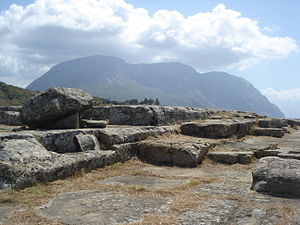 Ruins of the ancient Calydon

According to mythology, it was built by king Agrios, son of Portheus[2] and a great grandson of Aetolos (king of Plevron and Calydon) around 1600-1100 BC. The town, built near the banks of river Achelous (the natural border between Aetolia and Acarnania), was claimed by both states during ancient times. Agrinio became member of the Aetolian League and it was later destroyed by Cassander in 314 BC during the League's wars against the Kingdom of Macedonia.

The city reappears during the Ottoman period with the name Vrachori and apart from its Greek population it was also inhabited by many Turks. In 1585 it was deserted during the revolt of Theodoros Migas. At the beginning of the 18th century it became the administrative centre of Aetolia-Acarnania (then as the sanjak of Karleli), depended on the imperial harems. Vrachori participated in the Greek Revolution and was temporarily liberated on June 11, 1821. In August 1822, while Reşid Mehmed Pasha's (Kütahi) troops were marching towards Vrachori, its citizens decided to burn and evacuate their city, following the strategy of scorched earth. The deserted city was recaptured by the Turks. The city was finally included in the borders of the newborn Greek state permanently in 1832 with the treaty of Kalendar Kiosk (July 9, 1832) and was renamed after its ancient name, Agrinion.

In the years following the liberation, Agrinio went through an important growth and development, especially at the end of the 19th century and the dawn of the 20th. After the Greco-Turkish War and the Asia Minor Catastrophe, many refugees from Asia Minor (western Turkey) arrived in the city and settled in the district of Agios Konstantinos. At the same period there was an important internal immigration to Agrinio from the whole Aetolia-Acarnania region, along with immigration from the areas of Epirus and Evrytania.

During the Interwar period, in spite of economical crisis, works of infrastructure took place in the city, like the paving of streets and the installment of electricity, while a water tower was installed in 1930. At the same time excavations revealed the ancient city of Agrinion. Growth and prosperity returned after World War II and the Greek Civil War. This growth was boosted by the building of two major hydroelectric dam installations at Kremasta and Kastraki, on the north of the city. The tobacco industry and olive tree cultivation became the main income sources of the city. 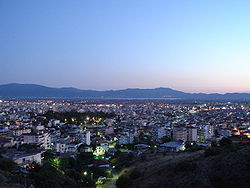 View of the city. 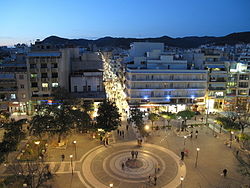 The climate of Agrinio is mediterranean (Csa) with a big amount of rainfall during the short winter and high temperatures in the summer, sometimes over 40 °C (104 °F).

On April 4, 2007 the city was struck by several earthquakes, with their epicenter located in the nearby Lake Trichonis on the southeast of the city. The first earthquake rumbled at around 2 AM, the second around 6 AM, three earthquakes shook at 10:13, 10:14 and 10:15 AM, and the last one at around 10:45 AM, it measured 5.3, 5.4, 5.6 and 5.7 on the Richter scale. Residents reported that the buildings and its glasses were shaking and rumbling. Minor damages were reported without any victims.

Agrinio is linked with the rest of the country by the GR-5/E55 which since the 1960s passes from Agrinion and the GR-38/E862? leading to Karpenisi and Lamia to the east. The city is located NW of the Rio–Antirrio bridge and Patras, N of Messolonghi, NE of Astakos, E-SE of Lefkada and Preveza, S of Arta and Ioannina, and W-SW of Karpenisi and Lamia. Since 2009 a part of the new Ionia Odos, which bypasses Agrinio, is constructed, from the village of Kefalovryso in the south to Lake Ozeros in the north.

Agrinio's airport is located near the city, in the area of Dokimi. IATA code: AGQ, ICAO: LGAG. The airport hosts the Agrinion aeroclub Agrinion Aeroclub, website. 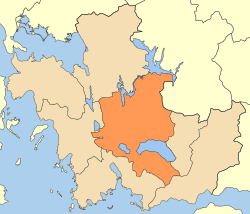 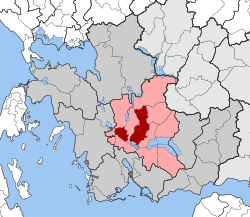 The extended municipality Agrinio was formed at the 2011 local government reform by the merger of the following 10 former municipalities, that became municipal units:[4]

The municipal unit (former municipality) of Agrinio consists of the following communities:

The city's official seal includes a characteristic moment of the ancient Greek mythology. More specifically, the seal depicts Hercules fighting the river-god Achelous. According to the myth, Hercules fought against the river-god for the sake of Diianira, the princess of Calydon, which both of them wanted as a wife. Despite Achelous' transformations, Hercules managed to win the battle and got married to the princess. According to Strabo, the myth symbolises the struggle of ancient Aetolians to control the river's power with embankments, by which the river was confined to its bed and thus the area gained large tracts of land for cultivation. 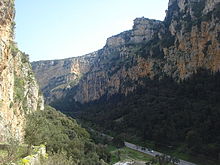 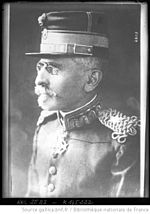