Ahmad Shah ascended to the Sun Throne on 16 July 1909, following the overthrow of his father and predecessor, Mohammad Ali Shah, who had attempted to reverse earlier constitutional restrictions on royal power, and thus enraged the majority of Persians. It is alleged[who?] that Ahmad Shah was one of the most selfish kings of Iran while others[who?] regard him as a strong ruler, interested in attending to the matters of government.

After removing Muhammad Ali Shah from power, the Grand Majles placed Ahmad Shah on the throne. The Grand Majles consisted of 500 delegate members who came from different backgrounds. They held a special tribunal in order to punish all those who participated in the civil war, among those hanged was Sheikh Fazlollah Nuri. They also brought in new reforms that were not seen in Persia before. They abolished class representation; created five new seats for the minorities in the Majles (Persian parliament); the Armenians got two seats, other religious minority groups such as Jews, Zoroastrians and Assyrians each got one seat in the new government; the Majles also democratized the electoral system; diminished the electoral dominance of Tehran and even lowered the voting age from twenty five to twenty.

Not much is known about Ahmad's early life prior to his ascendancy to the throne. He was very attached to his father. After his father left, Ahmad felt isolated and bitter. Due to his young age, a regent, his uncle Ali Reza Khan Azod al-Molk, took charge of his affairs. However, his lavish lifestyle did not gain him any favors with the Persian people. Ahmad Shah inherited a kingdom in turmoil, and a constituency frustrated with British and Russian imperialism and the absolute rule of his father.[citation needed]

Ahmad Shah attempted to fix the damage done by his father by appointing the best ministers he could find. He was, however, an ineffective ruler who was faced with internal unrest and foreign intrusions, particularly by the British and Russian Empires. Russian and British troops fought against the Ottoman forces in Persia during World War I. The War led to outcries across the country because the people of Persia were not happy that they were being used as a battleground. Thus, leading to local movement across the country that tried to challenge the power of Ahmad Shah Qajar and his government.[citation needed]

The Second Majles convened on November 1910 and just like the First Majlis, did not lead to any relevant accomplishment. The Majles was rendered ineffective because the central government was weak and did not have enough influence to reign in the changes that it had proposed. It is alleged[by whom?] that the Second Majles did not get along with Ahmad Shah[citation needed]. 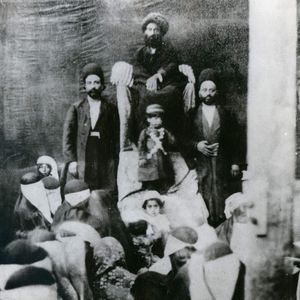 Ahmad Shah (center) as a child, pictured with Haj Seyed Gholamhossein Majd Mojabi (above) and guards in 1901.

In 1917, Britain used Persia as the springboard for an attack into Russia in an unsuccessful attempt to reverse the Russian Revolution of 1917. The newly born Soviet Union responded by annexing portions of northern Persia as buffer states much like its Tsarist predecessor. Marching on Tehran, the Soviets extracted ever more humiliating concessions from the Qajar government – whose ministers Ahmad Shah was often unable to control. The weakness of the central bureaucracy in the face of such aggression by an atheist foreign power sparked seething anger among many traditional Persians – including the young Ruhollah Khomeini, who would later condemn both communism and monarchy as treason against Persia's sovereignty and the laws of Islam.

By 1920, the government had virtually lost all power outside its capital and Ahmad Shah had lost control of the situation. The Anglo-Persian Agreement, along with new political parties, furtherimmobilized the country. The Moderates and Democrats often clashed, particularly when it came to minority rights and secularism. The debates between the two political parties led to violence and even assassinations.

The weak economic state of Persia put Ahmad Shah and his government at the mercy of foreign influence; they had to obtain loans from the Imperial Bank of Persia.[clarification needed] Furthermore, under the agreement, only a small fraction of the income generated by the Anglo-Persian Oil Company was received by Persia. On the other hand, the Red Army along with rebels and warlords ruled much of the countryside.

On 21 February 1921, Ahmad Shah was pushed aside in a military coup by his Minister of War and commander of the Cossack garrison, Colonel Reza Khan, who subsequently seized the post of Prime Minister. During the coup, Reza Khan used three thousand men and only eighteen machine guns, a very bloodless coup that moved forward quickly. Reza Khan was a self-made man who climbed his way up through the military ranks and appeared to be the right man to take back control of Persia. One of his first actions was to rescind the Anglo-Persian Treaty, and this was seen as a very successful diplomatic move since the treaty was very unpopular. In addition, he signed the Russo-Persian Treaty of Friendship. This agreement canceled all previous treaties between the two countries and also gave Persia full and equal shipping rights in the Caspian Sea. 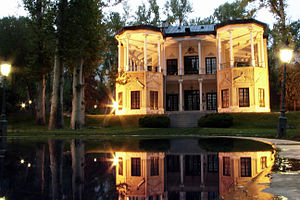 Ahmad Shahi Pavilion was built at the end of the Qajar era as Ahmad Shah's dwelling among Niavaran garden.

Stripped of all his remaining powers, Ahmad Shah went into exile with his family in 1923. Ahmad Shah's apparent lack of interest in attending to the affairs of the state and poor health had prompted him to leave Persia on this extended “European Tour.” He was formally deposed on 31 October 1925, when Reza Khan was proclaimed Shah by the Founders Assembly, taking the title Reza Shah Pahlavi. Reza Shah and the Majles thus terminated the Qajar Dynasty and established the Pahlavi Dynasty. 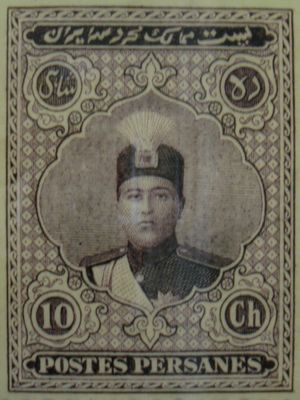 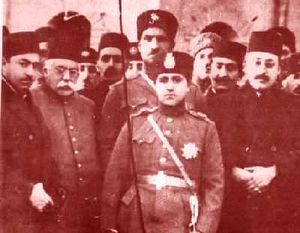 The coup of 1921 rendered Ahmad Shah politically weaker and less relevant. In 1923, Ahmad Shah left Persia for Europe for health reasons. Later, the formal termination of the Qajar Dynasty by the Majles, turned Ahmad Shah's 1923 European tour into exile. From exile, Ahmad Shah issued the following declaration indicating his displeasure with the turn of events that had led to his overthrow:

At this tragic moment when the future of my country is at risk, all my thoughts are with my people, to whom I address this declaration: The coup d'état just committed by Reza Khan against the constitution and my dynasty, was committed through the force of bayonets. It contravenes the most sacred laws and fatally leads my people into great calamities and undeserved sufferance. I strongly raise my voice in protest against this coup d'état. Now and in the future, I consider null and void all acts emanating from such a government and committed under its rule. I am and remain the legitimate and constitutional sovereign of Persia, and I await the hour of my return to my country to continue serving my people.[1]

Shortly after the coup, Mustafa Kemal Ataturk who had just been elected Turkey's first president[2][3] offered to help restore Ahmad Shah to the throne. To that end, he summoned Persian Ambassador to Turkey, Anoushirvan Sepahbody to the presidential palace and instructed him to immediately intervene on his behalf with Soltan Ahmad Shah in Paris with the following offer of assistance:

The Turkish government, in pursuance of its own national interest and for reasons of friendship, goodwill, and a desire to assist Your Majesty, is willing to extend a formal invitation to Your Majesty, to travel to Turkey and hence, to offer the help of a sufficient number of Turkish troops for Your Majesty to be able to enter Persia from the West and regain his throne.[1][4]

Ahmad Shah politely declined this offer, possibly either due to pride or lack of interest in continuing as king. Allegedly, it was only after this rejection of Ataturk's offer that the Turkish government threw its full support behind the new government of Reza Shah Pahlavi thus recognizing him as the new sovereign of Persia.[citation needed]

Prior to his death, it is said that Ahmad Shah followed frequent crash diets which did not help his health. For example, he lost and gained 90 kg within a two year span. He died in 1930 at Neuilly-sur-Seine, outside Paris, France, and was buried in his family crypt in Kerbela, Iraq.[5] His brother, former crown prince Mohammad Hassan Mirza, assured the physical continuation of the dynasty through his descendants.

Ahmad Shah Qajar married five times. His first wife was Lida Jahanbani. He did, also, have 4 children from 4 wives: