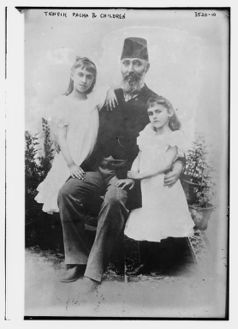 Ahmed Tevfik Pasha and his daughters

He held the office three times, the first in 1909 under Abdul Hamid II, and from 1918 to 1919 and from 1920 to 1922 under Mehmed V Reşad during the Allied occupation of Istanbul. In addition to his premiership, Ahmet Tevfik was also a diplomat, a member of the Ottoman Senate, and the Minister of Foreign Affairs.

Ahmet Tevfik was born on 11 February 1845 in Istanbul. His father, Ferik Ismail Pasha, was a Crimean Tatar descended from the Giray dynasty.[2] Ahmet Tevfik entered military service but left after becoming a junior officer, entering government bureaucracy training. After 1872, he held various foreign ministry posts. After serving as an ambassador in Rome, Vienna, St. Petersburg, and Athens, he served as the Ottoman chargé d'affaires and ambassador to Germany in Berlin from 1885 to 1895.[2] After returning to Istanbul, he served as the Minister of Foreign Affairs (Turkish: Hariciye Nazırı) from 1899 to 1909. After the proclamation of the Second Constitutional Era in 1908, Ahmet Tevfik Pasha was appointed to a seat in the revived tr (Senate of the Ottoman Empire) (Turkish: Ayan Meclisi), the upper house of the also-revived parliament, the General Assembly (Turkish: Meclis-i Mebusan).

While serving as chargé d'affaires in Athens, he met and married Elisabeth Tschumi, a Swiss woman working as a governess to the children of another diplomat. They had five children together.[2]

Ahmet Tevfik Pasha's first period of office as grand vizier was one of the direct outcomes of the failed counterrevolutionary 31 March Incident (which actually occurred on 13 April) in 1909. When the absolutists declared the countercoup, they demanded and received the resignation of the previous grand vizier Hüseyin Hilmi Pasha. Although their preferred replacement was not Ahmet Tevfik Pasha, his appointment at least fulfilled their demands for the removal of Hüseyin Hilmi Pasha.[3] Ahmet Tevfik Pasha, who had only reluctantly taken up the post at the urging of the pro-absolutist sultan Abdul Hamid II, formed a government made up of mostly non-partisan and neutral members and took precautions to limit the growth of violence that had begun in Istanbul and Adana. After the Hareket Ordusu (English: Army of Action) entered Istanbul and restored the constitutional government, and Abdul Hamid was deposed, Ahmet Tevfik Pasha resigned and Hüseyin Hilmi Pasha returned as grand vizier.

After World War I and the resignation of Ahmet Izzet Pasha, Ahmet Tevfik Pasha was again appointed grand vizier on 11 November 1918. Two days after his term began, the Allies began their occupation of Istanbul. The Allies pressured sultan Mehmet VI to dissolve parliament on 21 December 1918, and for a few weeks, Ahmet Tevfik Pasha's government was dissolved as well. He formed his government again on 12 January 1919, but after the invaders forced him to dissolve it once more, he resigned as grand vizier on 3 March 1919.[4]

After his second term as grand vizier, Ahmet Tevfik Pasha became the head of the tr (Senate of the Ottoman Empire) (which had not yet been dissolved, unlike the lower house). He then served as the president of the Ottoman delegation to the Paris Peace Conference ending World War I. Ahmet Tevfik Pasha's delegation refused the heavy terms of the proposed treaty, but another delegation sent by the Grand Vizier Damat Ferit Pasha accepted the terms and signed the Treaty of Sevres.[5]

On 21 October 1920, he was once more appointed grand vizier, replacing Damat Ferit Pasha. Meanwhile, the Turkish National Movement had established another government in Ankara, proclaiming itself to be the sole government of the nation and rejecting the sultanate. Ahmet Tevfik Pasha offered the nationalist Ankara government to join his monarchical Istanbul government to form one body at the Conference of London in 1921. However, the leader in Ankara, Mustafa Kemal, refused the offer, and the two governments sent separate delegations to the conference, with Ahmet Tevfik Pasha himself leading the Istanbul delegation and Bekir Sami Kunduh leading the Ankara delegation. However, once he arrived in London, Ahmet Tevfik Pasha, in a surprising move, proclaimed that the Ankara government indeed was the sole rightful government of Turkey and allowed Bekir Sami to be the only representative at the conference.

After the 1934 Surname Law, he adopted the last name "Okday." He died on 8 October 1936 in Istanbul and is interred at the Edirnekapı Martyr's Cemetery.

His biography, written by his grandson Şefik Okday, was published in 1986 and is titled My Grandfather, the Last Grand Vizier, Ahmet Tevfik Pasha (Turkish: Büyükbabam Son Sadrazam Ahmet Tevfik Paşa).