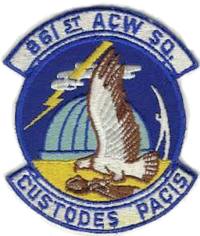 Emblem of the 861st Radar Squadron

The facility was originally constructed during World War II by the United States Army Air Forces and named Aiken Army Air Field. The airfield was constructed with three 5'000 foot bituminous runways in an "A" pattern. No known auxiliary airfields were constructed. The airfield and station opened on 24 December 1942[1] as a satellite airfield of Morris Army Airfield, North Carolina.

In May 1944 the 359th Army Air Force Base Unit was assigned host unit. It was assigned to Third Air Force, III Tactical Air Command 13 September 1944 as a group training airfield for reconnaissance units.[7] The airfield became a replacement training airfield for single-engine fighter pilots, training on P-40 Warhawk and P-51 Mustang aircraft, beginning on 19 October 1944. Active flying at the airfield ended on 28 February 1945, and jurisdiction of the base was transferred from Third Air Force to Air Technical Service Command for disposition on 31 March 1945.[8]

It is also known that Aiken AAF held a branch prisoner of war camp holding about 300 POWs who worked in the local forests. The dates of the POW camp are uncertain.[6] The airfield was turned over to local government authorities afterward and was converted into Aiken Municipal Airport.

In 1955 the United States Air Force exercised a return right to Aiken Municipal Airport and established Aiken Air Force Station as an Air Defense Command (ADC) general surveillance radar station. This site was initially part of Phase II of the Mobile Radar program. Radars in this network were designated “SM.”

Designated as SM-159 Aiken AFS was the first Phase II Mobile Radar system to achieve operational status. During December 1955 the 861st Aircraft Control and Warning Squadron began activating AN/FPS-3, AN/MPS-14, and AN/TPS-10D radars. Initially the station functioned as a Ground-Control Intercept (GCI) and warning station. As a GCI station, the squadron's role was to guide interceptor aircraft toward unidentified intruders picked up on the unit's radar scopes.

In 1958 an AN/FPS-20 and an AN/MPS-14 were operational. The site subsequently received an AN/FPS-7C search radar and an AN/FPS-26 heightfinder radar. During 1961 Aiken AFS joined the Semi Automatic Ground Environment (SAGE) system, initially feeding data to DC-09 at Gunter AFB, Alabama. After joining, the squadron was redesignated as the 861st Radar Squadron (SAGE) on 1 November 1961. The radar squadron provided information 24/7 the SAGE Direction Center where it was analyzed to determine range, direction altitude speed and whether or not aircraft were friendly or hostile.

On 31 July 1963, the site was redesignated as NORAD ID Z-159. In addition, Aiken AFS was incorporated into BUIC I, a manual back-up interceptor control system. BUIC I provided limited command and control capability in the event the SAGE system was disabled. Over the years, the equipment at the station was upgraded or modified to improve the efficiency and accuracy of the information gathered by the radars. The 861st was inactivated in June 1975.

The FAA continued to operate the AN/FPS-7C search radar for a few years, while the cantonment area was converted into a minimum-security prison. Dissatisfied with the prison setting, the FAA relocated to Lincolnton, Georgia, where today they continue to operate an ARSR-3 search radar. The prison was shut down in the mid / late 1990s, and the entire site has since been dismantled.