From Infogalactic: the planetary knowledge core
(Redirected from Ailred of Rievaulx)
Jump to: navigation, search 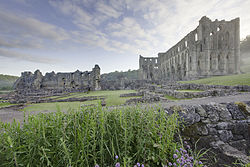 Aelred was born in Hexham, Northumbria, in 1110,[1] one of three sons of Eilaf, priest of St Andrew's at Hexham and himself a son of another Eilaf, treasurer of Durham.[2]

Aelred spent several years at the court of King David I of Scotland in Roxburgh, possibly from the age of 14,[3] rising to the rank of echonomus[4] (often termed 'steward' or 'Master of the Household') before leaving the court at age twenty-four (in 1134) to enter the Cistercian abbey of Rievaulx in Yorkshire.[5] He may have been partially educated by Lawrence of Durham, who sent him a hagiography of Saint Brigid.

From 1142–3, Aelred was novice master at Rievaulx. In 1143, he became the first abbot[6] of a new daughter house of Rievaulx at Revesby in Lincolnshire. In 1147, he was elected abbot of Rievaulx itself, a position he was to hold until his death. Under his administration, the abbey is said to have grown to some 140 monks and 500 conversi and laymen.[7] His role also required an amount of travel. Cistercian abbots were expected to make annual visitations to daughter-houses, and Rievaulx had five in England and Scotland by the time Aelred held office.[8] Moreover, Aelred had to make the long sea journey to the annual general chapter of the Order at Cîteaux.[9]

Alongside his role as a monk and later abbot, Aelred was involved throughout his life in political affairs. In 1138, when Rievaulx's patron, Walter Espec, was to surrender his castle at Wark to King David of Scotland, Aelred accompanied Abbot William of Rievaulx to the Scottish border to negotiate the transfer. In 1142 Aelred travelled to Rome, alongside Walter of London, Archdeacon of York, to represent before Pope Innocent II a group of northern prelates who opposed the election of King Stephen's nephew William as archbishop of York (the result of the journey was that Aelred brought back a letter from Innocent summoning the superiors that Aelred represented to appear in Rome the following March to make their deposition in the required canonical form; the resulting negotiations would drag on for many years).[10] The fourteenth-century version of the Peterborough Chronicle states that Aelred's efforts during the twelfth-century papal schism brought about Henry II's decisive support for the Cistercian candidate, resulting in 1161 in the formal recognition of Pope Alexander III.[11]

Aelred wrote several influential books on spirituality, among them Speculum caritatis ("The Mirror of Charity," reportedly written at the request of Bernard of Clairvaux) and De spiritali amicitia ("On Spiritual Friendship").[12] He also wrote seven works of history, addressing three of them to Henry II of England, advising him how to be a good king and declaring him to be the true descendent of Anglo-Saxon kings.

In his later years, he is thought to have suffered from the kidney stones and arthritis.[13] Walter reports that in 1157 the Cistercian General Council allowed him to sleep and eat in Rievaulx's infirmary; later he lived in a nearby hut. 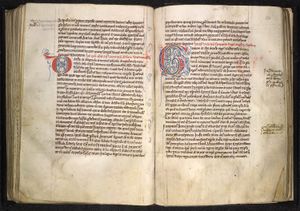 For his efforts in writing and administration Aelred was called by David Knowles the "St. Bernard of the North." Knowles, a historian of monasticism in England, also described him as "a singularly attractive figure," saying that "No other English monk of the twelfth century so lingers in the memory."[15]

All of Aelred's works have appeared in translation, most in English, and all in French.

Extant works[16] by Aelred include:

Aelred was never formally canonised, but became the centre of a cult in the north of England which was recognised officially by the Cistercians in 1476.[20] As such, he was venerated as a saint, with his body kept at Rievaulx. In the sixteenth century, before the dissolution of the monastery, John Leland saw Aelred's shrine at Rievaulx containing Aelred's body glittering with gold and silver.[21] Today, he is listed for 12 January, the traditional date of his death, in the Roman Martyrology and the calendars of various churches.

Much of Aelred's biography is known because of the Life written about him by Walter Daniel shortly after his death.

Until the twentieth century, Aelred was generally known as a historian rather than as a spiritual writer; for many centuries his most famous work was his Life of Saint Edward, King and Confessor.

A high school named after St. Aelred (the more modern spelling of his name) in Newton-le-Willows, Merseyside, in the United Kingdom, closed in 2011; a primary school in York is named for him. Formerly there was also a high school on Gleniffer Road in Glenburn, Paisley, named after St Aelred.

Aelred's work, private letters, and his Life by Walter Daniel, another twelfth-century monk of Rievaulx, have led historians, such as John Boswell of Yale University and Brian Patrick McGuire of Roskilde University in Denmark, to suggest that he was homosexual.[22] All of his works, nevertheless, encourage virginity among the unmarried and chastity in marriage and widowhood and warn against any sexual activity outside of marriage; in all his works in later life he treats of extra-marital sexual relationships as forbidden and condemns "unnatural relations" as a rejection of charity and the law of God. He criticised the absence of pastoral care for a young nun who experienced rape, pregnancy, beating, and a miraculous delivery in the Gilbertine community of Watton.

Several gay-friendly organisations have adopted Aelred as their patron saint, such as Integrity[23] in the Episcopal Church in the United States of America, National Anglican Catholic Church in the northeast United States, and the Order of St. Aelred.[24]