On 22 May 1990, 23 AF was redesignated as AFSOC and became a separate major command (MAJCOM) responsible for all USAF special operations forces (SOF), aircraft and personnel in the Regular Air Force, and the operational "gaining command" for all USAF SOF, aircraft and personnel in the Air Force Reserve (AFRES)...AFRES subsequently being redesignated the Air Force Reserve Command (AFRC) in 1997...and the Air National Guard (ANG). 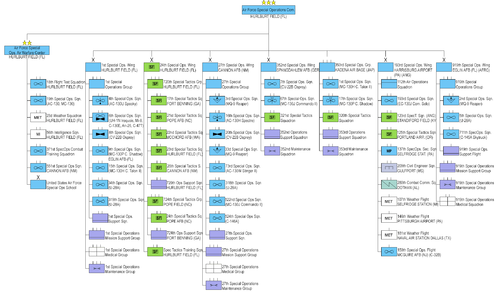 Special Tactics is the US Air Force special operations ground force. Similar in ability and employment to Marine Special Operations Command (MARSOC), Army Special Forces and Navy SEALs, Air Force Special Tactics personnel are typically the first to enter combat and often find themselves deep behind enemy lines in demanding, austere conditions, usually with little or no support. Due to the rigors of the career field, Special Tactics' year-long training is one of the most demanding in the military, with attrition rates between 80 to 90 percent. In an attempt to reduce the high attrition, Special Tactics is very selective when choosing their officers. Special Tactics Officers (STO) undergo a highly competitive process to gain entry into the Special Tactics career field, ensuring only the most promising and capable leaders are selected. STO leadership and role modeling during the difficult training reduces the attrition rate for enlisted trainees.

STO selection is a two-phase process. Beginning with Phase One, a board of veteran STOs reviews application packages consisting of letters of recommendation, fitness test scores, and narratives written by the applicants describing their career aspirations and reasons for applying. Based on Phase One performance, approximately 8 to 10 applicants are invited to the next phase. Phase Two is a weeklong battery of evaluations, ranging from physical fitness and leadership to emotional intelligence and personality indicators. At the end of Phase Two, typically 2 to 4 applicants are selected to begin the year-plus Special Tactics training pipeline.

AFSOC operates the following aircraft as part of its regular inventory:[13]

New MC-130J aircraft based on the Lockheed Martin KC-130J Super Hercules tanker variant will be acquired.[14]

In October 1983, 23 AF participated in the successful rescue of Americans from the island nation of Grenada. During the seven day operation, centered at Point Salines Airport, 23 AF furnished MC-130s, AC-130s, aircrews, maintenance, and support personnel. An EC-130 from the 193rd Special Operations Wing of the Air National Guard (ANG), played a significant psy-war role. An MC-130 pilot from the 8th Special Operations Squadron won the MacKay Trophy for his actions in leading the air drop on the Point Salines Airport.[citation needed]

In May 1986, the Goldwater-Nichols Department of Defense Reorganization Act led to the formation of the United States Special Operations Command. Senators William Cohen and Sam Nunn introduced the Senate bill, and the following month Congressman Dan Daniel introduced a like measure in the House of Representatives. The key provisions of the legislation formed the basis to amend the 1986 Defense Authorizations Bill. This bill, signed into law in October 1986, in part directed the formation of a unified command responsible for special operations. In April 1987 the DoD established the United States Special Operations Command (USSOCOM) at MacDill Air Force Base, Florida, and Army GEN James J. Lindsay assumed command. Four months later, 23 AF moved to Hurlburt Field, Florida.[citation needed]

Spectre gunship crews of the 1st SOW earned the Mackay Trophy and Tunner Award for their efforts, a 919th SOG Spectre crew earned the President's Award, and a 1st SOW Combat Talon crew ferried the captured Panamanian President, Manuel Noriega, to prison in the United States. Likewise, the efforts of the 1st SOW maintenance people earned them the Daedalian Award.[citation needed]

Currently, after major redesignations and reorganizations, AFSOC direct reporting units include the 16th SOW, the 352nd Special Operations Group, the 353rd Special Operations Group, the 720th Special Tactics Group (STG), the USAF Special Operations School and the 18th Flight Test Squadron (FLTS). During the early 1990s a major reorganization occurred within AFSOC. The 1720th STG became the 720th STG in March 1992; the transfer of ownership of Hurlburt Field from Air Mobility Command (AMC, and formerly MAC) to AFSOC in October 1992, followed by the merger of the 834th Air Base Wing (ABW) into the 1st SOW which assumed host unit responsibilities. A year later the 1st SOW became the 16th SOW in a move to preserve Air Force heritage.[citation needed]

Meanwhile, the Special Missions Operational Test and Evaluation Center (SMOTEC), which explored heavy lift frontiers in special operations capabilities, while pursuing better equipment and tactics development, was also reorganized. In April 1994, the Air Force, in an effort to standardize these types of organizations, redesignated SMOTEC as the 18th Flight Test Squadron.[citation needed]

Combat Talons dropped the largest conventional bombs of the war and, along with Combat Shadows, dropped the most psy-war leaflets. The AC-130s provided valuable fire support and armed reconnaissance, but they also suffered the single greatest combat loss of coalition air forces with the shooting down of Spirit 03. All fourteen crew members aboard were lost.[citation needed] 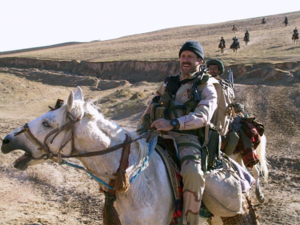 Then-MSgt Bart Decker from the 23rd STS, on horseback in the Balkh valley, during the initial days of the U.S. invasion of Afghanistan in 2001.

The terrorist attacks on the World Trade Center in New York City, and the Pentagon, Washington D.C., on 11 September 2001 pushed the United States special operations forces to the forefront of the war against terrorism. By the end of September 2001, AFSOC deployed forces to southwest Asia for Operation Enduring Freedom to help destroy the al Qaeda terrorist organization and remove the Taliban regime in Afghanistan. AFSOC airpower delivered special tactics forces to the battle ground and they in turn focused U.S. airpower and allowed Afghanistan's Northern Alliance ground forces to dispatch the Taliban and al Qaeda from Afghanistan. AFSOC personnel also deployed to the Philippines to help aid that country's efforts against terrorism.[citation needed]

In March 2003, AFSOC again deployed forces to southwest Asia this time in support of what would become Operation Iraqi Freedom – the removal of Saddam Hussein and his Baathist government. The command's personnel and aircraft teamed with SOF and conventional forces to quickly bring down Saddam Hussein's government by May 2003. AFSOC forces have continued to conduct operations since then, in support of the new Iraqi government against insurgents and terrorists.[citation needed]

AFSOC has had nine commanders since its inception in 1990. 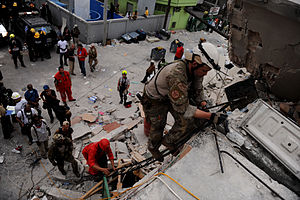