From Infogalactic: the planetary knowledge core
Jump to: navigation, search
For the Air Ministry in Nazi Germany, see Reich Air Ministry.
Not to be confused with Ministry of Aviation. 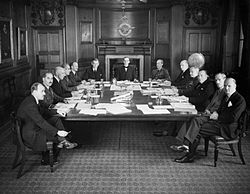 The Air Ministry was a department of the British Government with the responsibility of managing the affairs of the Royal Air Force, that existed from 1918 to 1964. It was under the political authority of the Secretary of State for Air.

Organisations before the Air Ministry

On 13 April 1912, less than two weeks after the creation of the Royal Flying Corps (which initially consisted of both a naval and a military wing), an Air Committee was established to act as an intermediary between the Admiralty and the War Office in matters relating to aviation. The new Air Committee was composed of representatives of the two war ministries, and although it could make recommendations, it lacked executive authority. The recommendations of the Air Committee had to be ratified by the Admiralty Board and the Imperial General Staff and, in consequence, the Committee was not particularly effective. The increasing separation of army and naval aviation from 1912 to 1914 only exacerbated the Air Committee's ineffectiveness and the Committee did not meet after the outbreak of the First World War.

By 1916 the lack of co-ordination of the Army's Royal Flying Corps and the Navy's Royal Naval Air Service had led to serious problems, not only in the procurement of aircraft engines, but also in the air defence of Great Britain.[citation needed] It was the supply problems to which an attempt at rectification was first made. The War Committee meeting on 15 February 1916 decided immediately to establish a standing joint naval and military committee to co-ordinate both the design and the supply of materiel for the two air services. This committee was titled the Joint War Air Committee, and its chairman was Lord Derby.[1] It was also at the meeting on 15 February that Curzon proposed the creation of an Air Ministry. As with the pre-war Air Committee, the Joint War Air Committee lacked any executive powers and therefore was not effective. After only eight sittings, Lord Derby resigned from the Committee, stating that "It appears to me quite impossible to bring the two wings closer together ... unless and until the whole system of the Air Service is changed and they are amalgamated into one service."[2]

The Joint War Air Committee was composed as follows:

The first Air Board

The next attempt to establish effective co-ordination between the two air services was the creation of an Air Board. The first Air Board came into being on 15 May 1916 with Lord Curzon as its chairman. The inclusion of Curzon, a Cabinet Minister, and other political figures was intended to give the Air Board greater status than the Joint War Air Committee. In October 1916 the Air Board published its first report which was highly critical of the arrangements within the British air services. The report noted that although the Army authorities were ready and willing to provide information and take part in meetings, the Navy were often absent from Board meetings and frequently refused to provide information on naval aviation.

The second Air Board

In January 1917 the Prime Minister David Lloyd George replaced the chairman Lord Curzon with Lord Cowdray. Godfrey Paine, who served in the newly created post of Fifth Sea Lord and Director of Naval Aviation, sat on the board and this high level representation from the Navy helped to improve matters. Additionally, as responsibility for the design of aircraft had been moved out of single service hands and given to the Ministry of Munitions, some of the problems of inter-service competition were avoided.[3][4]

Establishment of the Air Ministry

Despite attempts at reorganization of the Air Board, the earlier problems failed to be completely resolved. In addition, the growing number of German air raids against Great Britain led to public disquiet and increasing demands for something to be done. As a result Lloyd George, the British Prime Minister, established a committee composed of himself and General Jan Smuts, which was tasked with investigating the problems with the British air defences and organizational difficulties which had beset the Air Board.

Towards the end of the First World War, on 17 August 1917, General Smuts presented a report to the War Council on the future of air power. Because of its potential for the 'devastation of enemy lands and the destruction of industrial and populous centres on a vast scale', he recommended a new air service be formed that would be on a level with the Army and Royal Navy. The new air service was to receive direction from a new ministry and on 29 November 1917 the Air Force Bill received Royal Assent and the Air Ministry was formed just over a month later on 2 January 1918. Lord Rothermere was appointed the first Air Minister. On 3 January, the Air Council was constituted as follows:[5]

The Air Ministry initially met in the Hotel Cecil on the Strand. Later, in 1919, it moved to Adastral House on Kingsway.[6] The creation of the Air Ministry resulted in the disestablishment of the Army Council's post of Director-General of Military Aeronautics.[7]

The Air Ministry issued specifications for aircraft that British aircraft companies would supply prototypes to. These were then assessed, if ordered the Ministry assigned the aircraft name. (see List Of Air Ministry Specifications).

The ordering procedure used I.T.P. (Intention to Proceed) contract papers; these specified a maximum fixed price, which could (after investigation) be less. But when Lord Nuffield got the I.T.P. contract papers for a Wolseley radial aero engine, which would have required re-orientation of their offices with an army of chartered accountants, he decided to deal only with the War Office and the Admiralty, not the Air Ministry. So the aero engine project was abandoned in 1936, see Airspeed. Nevil Shute Norway wrote that the loss of such a technically advanced engine was a great loss to Britain as well as Airspeed, and blamed the over-cautious high civil servants of the Air Ministry. When he had asked Lord Nuffield to retain the engine, Nuffield said: I tell you, Norway ... I sent that I.T.P. thing back to them, and I told them they could put it where the monkey put the nuts! [8]

As a result of the need for weather information for aviation, the Meteorological Office located many of its observation and data collection points on RAF stations.

In the 1930s, the Air Ministry commissioned a scientific study of propagating electromagnetic energy which concluded that a death ray was impractical but detection of aircraft appeared feasible.[9] Robert Watson-Watt demonstrated a working prototype and patented the device in 1935 (British Patent GB593017)[10][11][12] The device served as the base for the Chain Home network of radars to defend Great Britain.

By April 1944, the ministry's air Intelligence branch had succeeded in its intelligence efforts regarding "the beams, the Bruneval Raid, the Gibraltar barrage, radar, Window, heavy water, and the German nightfighters" (R.V. Jones). Other WWII technology & warfare efforts included the branch's V-1 and V-2 Intelligence activities.[13]

In 1964 the Air Ministry merged with the Admiralty and the War Office to form the Ministry of Defence.