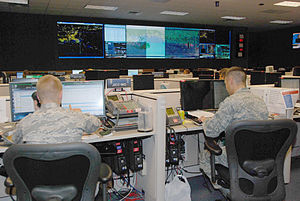 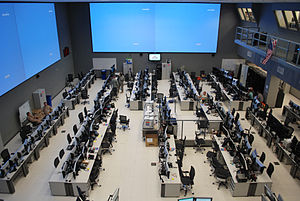 An Air and Space Operations Center (AOC) is a type of command center used by the United States Air Force. It is the senior agency of the Air Force component commander to provide command and control of air and space operations.[1]

The U.S. Air Force employs two kinds of AOCs: regional AOCs utilizing the AN/USQ-163 Falconer weapon system that support geographic combatant commanders, and functional AOCs that support functional combatant commanders.[2] When there is more than one U.S. military service working in an AOC, such as when Naval Aviation from the U.S. Navy and/or the U.S. Marine Corps is incorporated, it is called a Joint Air and Space Operations Center (JAOC). In cases of allied or coalition (multinational) operations in tandem with USAF or Joint air and space operations, the AOC is called a Combined Air and Space Operations Center (CAOC).[1]

An AOC is the senior element of the Theater Air Control System (TACS). The Joint Force Commander (JFC) assigns a Joint Forces Air Component Commander (JFACC) to lead the AOC weapon system. If allied or coalition forces are part of the operation, the JFC and JFACC will be redesignated as the CFC and CFACC, respectively.

Quite often the Commander, Air Force Forces (COMAFFOR) is assigned the JFACC/CFACC position for planning and executing theater-wide air and space forces. If another service also provides a significant share of air and space forces, the Deputy JFACC/CFACC will typically be a senior flag officer from that service. For example, during Operation Enduring Freedom and Operation Iraqi Freedom, when USAF combat air forces (CAF) and mobility air forces (MAF) were integrated with extensive USN and USMC sea-based and land-based aviation and Royal Air Force and Royal Navy / Fleet Air Arm aviation, the CFACC was an aeronautically rated USAF lieutenant general, assisted by an aeronautically designated USN rear admiral (upper half) as the Deputy CFACC, and an aeronautically rated RAF air commodore as the Senior British Officer (Air).

There are five divisions in the AOC. These separate, but distinct, organizations fuse information that eventually becomes the Air Tasking Order. Staffing of these divisions consists primarily of USAF officers of various specialities in the ranks of captain, major and lieutenant colonel, supported by a smaller cohort of enlisted airmen, typically in the rank of staff sergeant and above. When conducting joint air and space operations, U.S. Army and USMC officers of similar rank and USN officers in the ranks of lieutenant, lieutenant commander and commander will also provide augmentative manning as required, the majority of whom will be aeronautically rated/aeronautically designated. Senior leadership oversight of the AOC is provided by USAF colonels and general officers and USN captains and flag officers.

The table below lists the Air and Space Operations Centers currently in service in the US Air Force, the Numbered Air Force (NAF) and Major Command (MAJCOM) to which they are assigned, Unified Combatant Command they support, and where they are stationed. 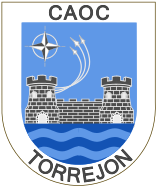 Emblem of the CAOC TJ, Torrejon