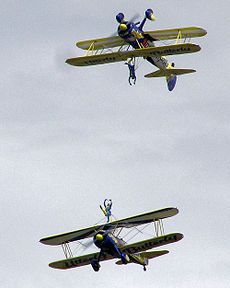 An air show, (also airshow, Air Fair, or Air Tattoo) is a public event at which aviators display their flying skills and the capabilities of their aircraft to spectators, usually by means of aerobatics. Air shows without aerobatic displays, having only aircraft displayed parked on the ground, are called "static air shows". 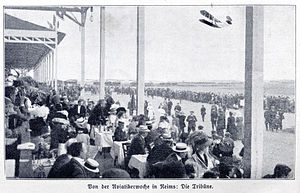 A month after Blériot's crossing of the English Channel the aviation week in Reims, France, August 1909, caught special worldwide attention.

Some air shows are held as a business venture or as a trade event where aircraft, avionics and other services are promoted to potential customers. Many air shows are held in support of local, national or military charities. Military air firms often organise air shows at military airfields as a public relations exercise to thank the local community, promote military careers and raise the profile of the military.

Air show "seasons" vary around the world. The United States enjoys a long season that generally runs from March to November, covering the spring, summer, and fall seasons. Other countries often have much shorter seasons. The European season usually starts in late April or Early May and is usually over by mid October. The Middle East, Australia and New Zealand hold their events between January and March. However, for many acts, the "off-season" does not mean a period of inactivity; they use this time for maintenance and practice. 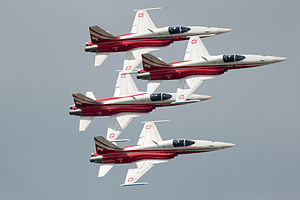 The Patrouille Suisse performing at the ILA Berlin Air Show

The type of displays seen at an event are constrained by a number of factors, including the weather and visibility. Most aviation authorities now publish rules and guidance on minimum display heights and criteria for differing conditions. In addition to the weather, pilots and organizers must also consider local airspace restrictions. Most exhibitors will plan "full," "rolling" and "flat" display for varying weather and airspace conditions.

The types of shows vary greatly. Some are large scale military events with large flying displays and ground exhibitions while others held at small local airstrips can often feature just one or two hours of flying with just a few stalls on the ground. Air Displays can be held during day or night with the latter becoming increasingly popular. Shows don't always take place over airfields; some have been held over the grounds of stately homes or castles and over the sea at coastal resorts. 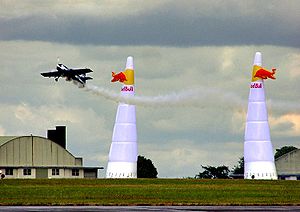 Air racing at an air show in England: the Red Bull Air Race heat held at Kemble Airfield, Gloucestershire. The aircraft fly singly, and pass between pairs of pylons

Before the Second World War, air shows were associated with long distance air races, often lasting many days and covering thousands of miles. While the Reno Air Races keep this tradition alive, most air shows today primarily feature a series of aerial demos of short duration.

Most air shows feature warbirds, aerobatics, and demonstrations of modern military aircraft, and many air shows offer a variety of other aeronautical attractions as well, such as wing-walking, radio-controlled aircraft, water/slurry drops from firefighting aircraft, simulated helicopter rescues and sky diving. 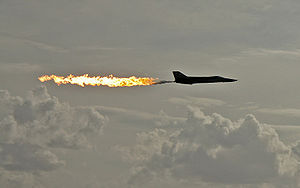 Solo military jet demos, also known as tactical demo, feature one aircraft, usually a strike fighter or an advanced trainer. The demonstration focuses on the capabilities of modern aircraft used in combat operations. The display will usually demonstrate the aircraft's very short (and often very loud) takeoff rolls, fast speeds, slow approach speeds, as well as their ability to quickly make tight turns, to climb quickly, and their ability to be precisely controlled at a large range of speeds. Manoeuvres include aileron rolls, barrel rolls, hesitation rolls, Cuban-8s, tight turns, high-alpha flight, a high-speed pass, double Immelmans, and touch-and-gos. Tactical demos may include simulated bomb drops, sometimes with pyrotechnics on the ground for effect. Aircraft with special characteristics that give them unique capabilities will often display those in their demos; For example, Russian fighters with Thrust vectoring may be used to perform Pugachev's Cobra or the Kulbit, among other difficult manoeuvers that cannot be performed by other aircraft. Similarly, an F-22 pilot may hover his jet in the air with the nose pointed straight up, a Harrier or Osprey pilot may perform a vertical landing or vertical takeoff, and so on. 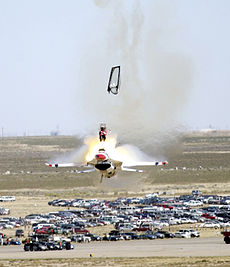 Mountain Home Air Force Base, Idaho, September 14, 2003: U.S. Air Force Thunderbirds Captain Christopher Stricklin ejecting from his F-16 after realizing he could not pull up in time from a Split-S and ensuring the aircraft would not crash into spectators. The aircraft was destroyed less than a second later with no loss of life.

Air shows may present some risk to spectators and aviators. Accidents have occurred, sometimes with a large loss of life, such as the 1988 disaster at Ramstein Air Base in Germany and the 2002 air show crash at Lviv, Ukraine. Because of these accidents, the various aviation authorities around the world have created set rules and guidance for those running and participating in air displays. Air displays are often monitored by aviation authorities to ensure safe procedures.

In the United Kingdom, local authorities will first need to approve any application for an event to which the public is admitted. No approval, no event. The first priority must be to arrange insurance cover and details can be obtained from your local authority. An added complication is a whole new raft of legislation concerning Health & Safety in particular Corporate Manslaughter, which can involve the event organiser being charged with a criminal offence if any of the insurances and risk assessments are not fully completed well in advance of the event. If this very basic step isn't completed then any further activity should be halted until it is.

Rules govern the distance from the crowds that aircraft must fly. These vary according to the rating of the pilot/crew, the type of aircraft and the way the aircraft is being flown. For instance, slower lighter aircraft are usually allowed closer and lower to the crowd than larger, faster types. Also, a fighter jet flying straight and level will be able to do so closer to the crowd and lower than if it were performing a roll or a loop.

Pilots can get authorizations for differing types of displays (i.e. limbo flying, basic aerobatics to unlimited aerobatics) and to differing minimum base heights above the ground. To gain such authorizations, the pilots will have to demonstrate to an examiner that they can perform to those limits without endangering themselves, ground crew or spectators.

Despite display rules and guidances, accidents have continued to happen. However, air show accidents are rare and where there is proper supervision air shows have impressive safety records. Each year, organisations such as International Council of Air Shows and European Airshow Council meet and discuss various subjects including air show safety where accidents are discussed and lessons learnt.